An Interview With Bruce Warshal Parting Shots From A Tv Commentator 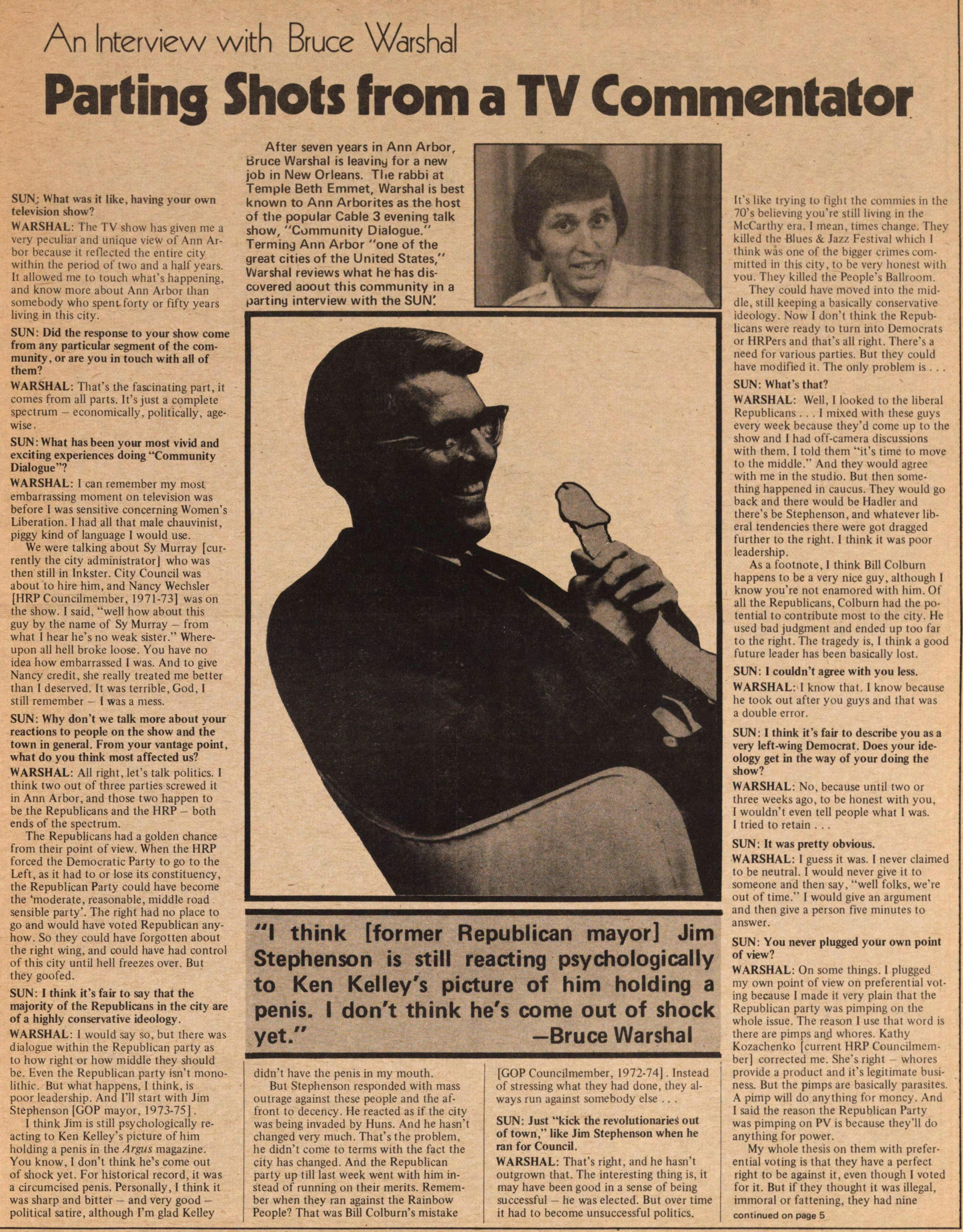 An Interview with Bruce Warshal

Parting Shots from a TV Commentator

After seven years in Ann Arbor, Bruce Warshal is leaviny for a new job in New Orleans. The rabbi at Temple Beth Emmet, Warshal is best known to Ann Arborites as the host of the popular Cable 3 evening talk show, "Community Dialogue." Terming Ann Arbor "one of the great cities of the United States," Warshal reviews what he has discovered about this community in a parting interview with the SUN!

SUN: What was it like, having your own television show?

WARSHAL: The TV show has given me a very peculiar and unique view of Ann Arbor because it reflected the entire city within the period of two and a half years. It allowed me to touch what's happening, and know more about Ann Arbor than somebody who spent forty or fifty years living in this city.

SUN: Did the response to your show come from any particular segment of the community, or are you in touch with all of them?

WARSHAL: That's the fascinating part, it comes from all parts. It's just a complete spectrum - economically, politically, agewise.

SUN : What has been your most vivid and exciting experiences doing "Community Dialogue"?

WARSHAL: I can remember my most embarrassing moment on television was before I was sensitive concerning Women's Liberation. I had all that male chauvinist, piggy kind of language I would use.

We were talking about Sy Murray [currently the city administrador] who was then still in Inkster. City Council was about to hire him, and Nancy Wechsler [HRP Councilmember, 1971-73] was on the show. l said, "well how about this guy by the name of Sy Murray - from what I hear he's no weak sister." Whereupon all hell broke loose. You have no idea how embarrassed I was. And to give Nancy credit, she really treated me better than I deserved. It was terrible, God, I still remember - I was a mess.

SUN: Why don't we talk more about your reactions to people on the show and the town in general. From your vantage point, what do you think most affected us?

WARSHAL: All right, let's talk politics. I think two out of three parties screwed it in Ann Arbor, and those two happen to be the Republicans and the HRP - both ends of the spectrum. The Republicans had a golden chance from their point of view. When the HRP forced the Democratic Party to go to the Left, as it had to or lose its constituency, the Republican Party could have become the 'moderate, reasonable, middle road sensible party'. The right had no place to go and would have voted Republican anyhow. So they could have forgotten about the right wing, and could have had control of this city until hell freezes over. But they goofed.

SUN: I think it's fair to say that the majority of the Republicans in the city are of a highly conservative ideology.

I think Jim is still psychologically reacting to Ken Kelley's picture of him holding a penis in the Argtis magazine. You know, I don't think he's come out of shock yet. For historical record, it was a circumcised penis. Personally, I think it was sharp and bitter - and very good - political satire, although I'm glad Kelley didn't have the penis in my mouth.

But Stephenson responded with mass outrage against these people and the affront to decency. He reacted as if the city was being invaded by Huns. And he hasn't changed very much. That's the problem, he didn't come to terms with the fact the city has changed. And the Republican party up till last week went with him instead of running on their merits. Remember when they ran against the Rainbow People? That was Bill Colburn's mistake [GOP Councilmember, 1972-74]. Instead of stressing what they had done, they always run against somebody else . . .

SUN: Just "kick the revolutionaries out of town," like Jim Stephenson when he ran for Council.

WARSHAL: That's right, and he hasn't outgrown that. Tlie interesting thing is, it may have been good in a sense of being successful - he was elected. But over time it had to become unsuccessful politics. It's like trying to tiglit the commies in the 70's believing you're still living in the McCarthy era. I mean, times change. They killed the Blues & Jazz Festival which I think was one of the biggest crimes committed in this city, to be very honest with you. They killed the People's Ballroom.

They could have moved into the middle, still keeping a basically conservative ideology. Now I don't think the Republicans were ready to turn into Democrats or HRPers and that's all right. There's a need for various parties. But they could have modified it. The only problem is ...

WARSHAL: Well, I looked to the liberal Republicans ... I mixed with these guys every week because they'd come up to the show and I had off-camera discussions with them. I told them "it's time to move to the middle." And they would agree with me in the studio. But then something happened in caucus. They would go back and there would be Hadier and there's be Stephenson, and whatever liberal tendencies there were got dragged turther to the right. I think it was poor leadership.

As a footnote, I think Bill Colburn happens to be a very nice guy, although I know you're not enamored with him. Of all the Republicans, Colburn had the potential to contribute most to the city. He used bad judgment and ended up too far to the right. The tragedy is, I think a good future leader has been basically lost.

SUN: I couldn't agree with you less.

WARSHAL: I know that. I know because he took out after you guys and that was a double error.

SUN: I think it's fair to describe you as a very left-wing Democrat. Does your ideology get in the way of your doing the show?

WARSHAL: No, because until two or three weeks ago, to be honest with you, I wouldn't even tell people what I was. I tried to retain . . .

SUN: It was pretty obvious.

WARSHAL: I guess it was. I never claimed to be neutral. I would never give it to someone and then say, "well folks, we're out of time.'" I would give an argument and then give a person five minutes to answer.

SUN: You never plugged your own point of view?

WARSHAL: On some things. I plugged my own point of view on preferential voting because I made it very plain that the Republican party was pimping on the whole issue. The reason I use that word is there are pimps and whores. Kathy Kozachenko [current HRP Council member] corrected me. She's right whores provide a product and it's legitimate business. But the pimps are basically parasites. A pimp will do anything for money. And I said the reason the Republican Party was pimping on PV is because they'll do anything for power.

My whole thesis on them with preferential voting is that they have a perfect right to be against it, even though I voted for it. But if they thought it was illegal, immoral or fattening, they had nine months and a legal procedure to follow. They chose to run under a system, and then after they lost, challenge it and say, "hey, we didn't like the rules." Well, that's a heads-I-win, tails-you-lose situation. And that is undermining democracy. If the Democrats did the same thing - lost and then challenged the system - I'd hit them just as hard.

SUN: What about other Republicans besides Stephenson and Colburn?

WARSHAL: You're going to kill me for this, but I generally like them. I like Bob Henry [current GOP Council memberJ , he's a very personable guy. I knew Richard Hadier [GOP Council member, 1973-75] . Old Smiley never showed up for the show. I think he was afraid of the show, I really do.

SUN : Because you were so outspoken?

WARSHAL: Because he was challenged. The difference between doing our show on Cable and let's say Ted Heisel's "Community Comment" [on WPAG radio) was that Ted will open up the mike and you have a half hour to give your own propaganda, on all sides. That's one way of running a show - I don't knock it. But you'd be challenged on this show, not only by me but the olher two parties present.

Other Republicans ... I have nothing against them personally. They're not ping me off because I have to admit I'm not being ripped off. In a sense, as a liberal Democrat, I share in some of the influence that they have. You know. I did not live in a poverty stricken area of town - I lived in Lansdowne. So, I guess socially they are not that far from me. It's just that they're crazy politically.

SUN : What makes them crazy?

The future of this city. I think, is in much better hands now because there is a 6-5 Dcmocrat-HRP  majority. At least six people on Council will agree to the fact that the city has to be shared by everybody. And that one community and one culture can not begin to step on another. It's this mature analysis of life. I mean, you have to look around and say, "where am I living?". And by the way, this analysis probably applies to the United States as a whole, but it certainly applies to Ann Arbor in microcosm. When you understand this then your whole way of running the city begins to change.

Watch for part 2 of the SUN's interview with Bruce Warshal in our August 1 issue, with more commentary on the Human Rights Party, downtown development, Ann Arbor media, Genesis - the joint Jewish-Christian worship-center - and more.