Police Para-military Unit Proposed Is There A Swat In Detroit's Future? 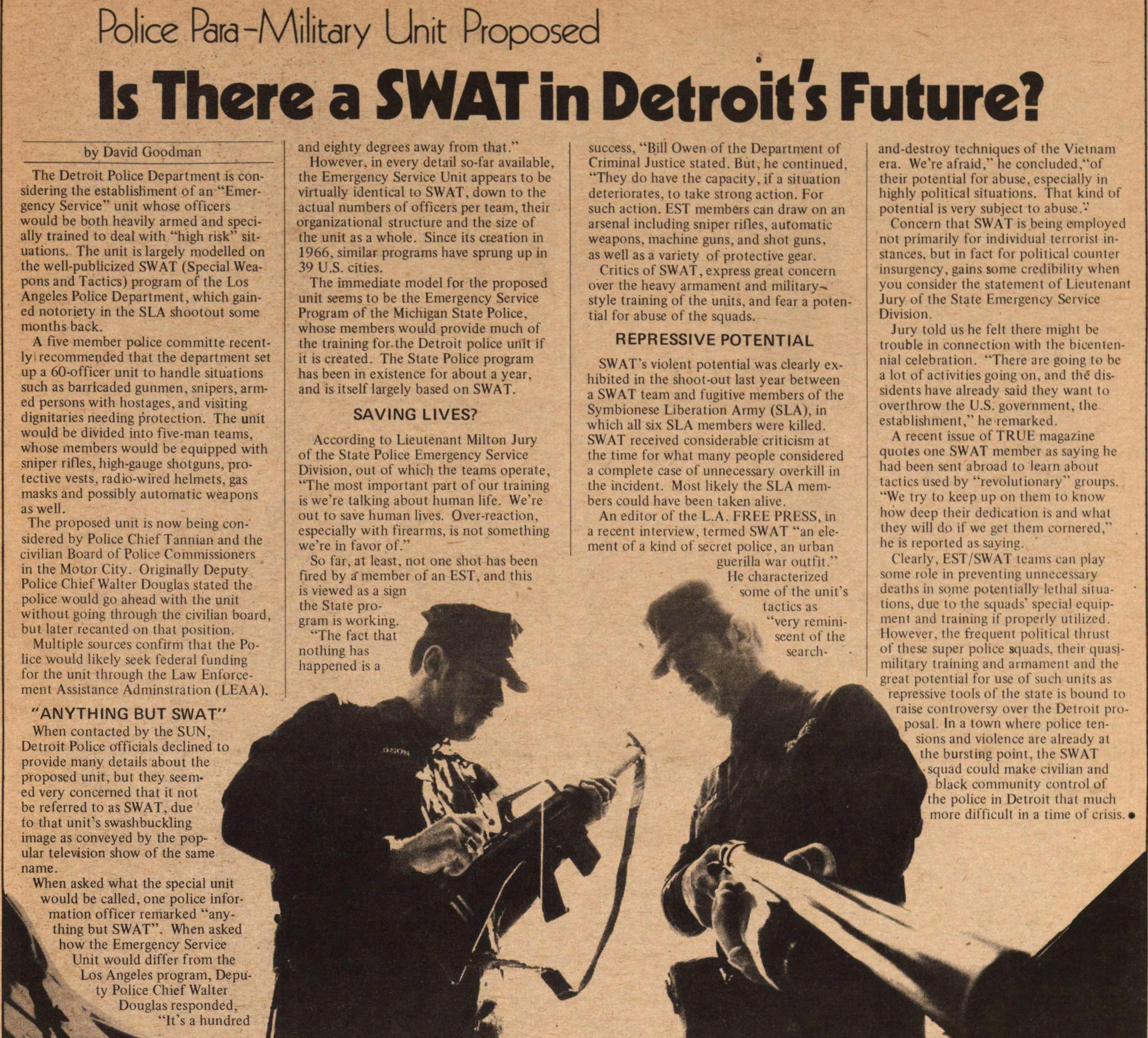 Is There a SWAT in Detroit's Future?

The Detroit Police Department is considering the establishment of an "Emergency Service" unit whose officers would be both heavily armed and specially trained to deal with "high risk" situations. The unit is largely modeled on the well-publicized SWAT (Special Weapons and Tactics) program of the Los Angeles Police Department, which gained notoriety in the SLA shootout some months back.

A five member police committee recently recommended that the department set up a 60-officer unit to handle situations such as barricaded gunmen, snipers, armed persons with hostages, and visiting dignitaries needing protection. The unit would be divided into five-man teams, whose members would be equipped with sniper rifles, high-gauge shotguns. protective vests, radio-wired helmets, gas masks and possibly automatic weapons as well.

The proposed unit is now being considered by Police Chief Tannian and the civilian Board of Police Commissioners in the Motor City. Originally Deputy Police Chief Walter Douglas stated the police would go ahead with the unit without going through the civilian board, but later recanted on that position. Multiple sources confirm that the Police would likely seek federal funding for the unit through the Law Enforcement Assistance Adminstration (LEAA).

When contacted by the SUN, Detroit Police officials declined to provide many details about the proposed unit, but they seemed very concerned that it not be referred to as SWAT, due to that unit's swashbuckling image as conveyed by the popular television show of the same name.

When asked what the special unit would be called, one police information officer remarked "anything but SWAT". When asked how the Emergency Service Unit would differ from the  Los Angeles program, Deputy Police Chief Walter  Douglas responded,  "It's a hundred and eighty degrees away from that."

However, in every detail so-far available, the Emergency Service Unit appears to be virtually identical to SWAT, down to the actual numbers of officers per team, their organizational structure and the size of the unit as a whole. Since its creation in 1966, similar programs have sprung up in 39 U.S. cities.

The immediate model for the proposed unit seems to be the Emergency Service Program of the Michigan State Police, whose members would provide much of the training for the Detroit police unit if it is created. The State Police program has been in existence for about a year, and is itself largely based on SWAT.

According to Lieutenant Milton Jury of the State Police Emergency Service Division, out of which the teams operate, "The most important part of our training is we're talking about human life. We're out to save human lives. Over-reaction, especially with firearms, is not something we're in favor of.

" So far, at least, not one shot has been fired by a member of an EST, and this is viewed as a sign the State program is working.

"The fact that nothing has happened is a success, "Bill Owen of the Department of Criminal Justice stated. But, he continued, "They do have the capacity, if a situation deteriorates, to take strong action, For such action, EST members can draw on an arsenal including sniper rifles, automatic weapons. machine guns, and shot guns, as well as a variety of protective gear.

Critics of SWAT, express great concern over the heavy armament and military style training of the units, and fear a potential for abuse of the squads.

SWAT's violent potential was clearly exhibited in the shoot-out last year between a SWAT team and fugitive members of the Symbionese Liberation Army (SLA), in which all six SLA members were killed. SWAT received considerable criticism at the time for what many people considered a complete case of unnecessary overkill in the incident. Most likely the SLA members could have been taken alive.

An editor of the L.A. FREE PRESS, in a recent interview, termed SWAT "an element of a kind of secret police, an urban guerilla war outfit." He characterized some of the unit's tactics as "very reminiscent of the search-and-destroy techniques of the Vietnam era. We're afraid,"  he concluded,"of their potential for abuse, especially in highly politica! situalions. That kind of potential is very subject to abuse."

Concern that SWAT is being employed not primarily for individual terrorist instances, but in fact for political counter insurgency, gains sonic credibility when you consider the statement of Lieutenant Jury of the State Emergency Service Division.

Jury told us he felt there might be trouble in connection with the bicentennial celebration. "There are going to be a lot of activities going on, and the dissidents have already said they want to overthrow the U.S. govemment, the establishment," he remarked.

A recent issue of TRUE magazine quotes one SWAT member as saying he had been sent abroad to learn about tactics used by "revolutionary" groups. "We try to keep up on them to know how deep their dedication is and what they will do if we get them cornered," he is reported as saying.

Clearly, EST/SWAT teams can play some role in preventing unnecessary deaths in some potentially lethal situations, due to the squads' special equipment and training if properly utilized. However, the frequent political thrust of these super police squads, their quasimilitary training and armament and the greal potential for use of such units as repressive tools of the suite is bound io raise cuntroversy over the Detroit proposal. In a town where police tensions and violence are already at the bursting point, the SWAT squad could make civilian and black community control of the police in Detroit that much more difficult in a time of crisis.