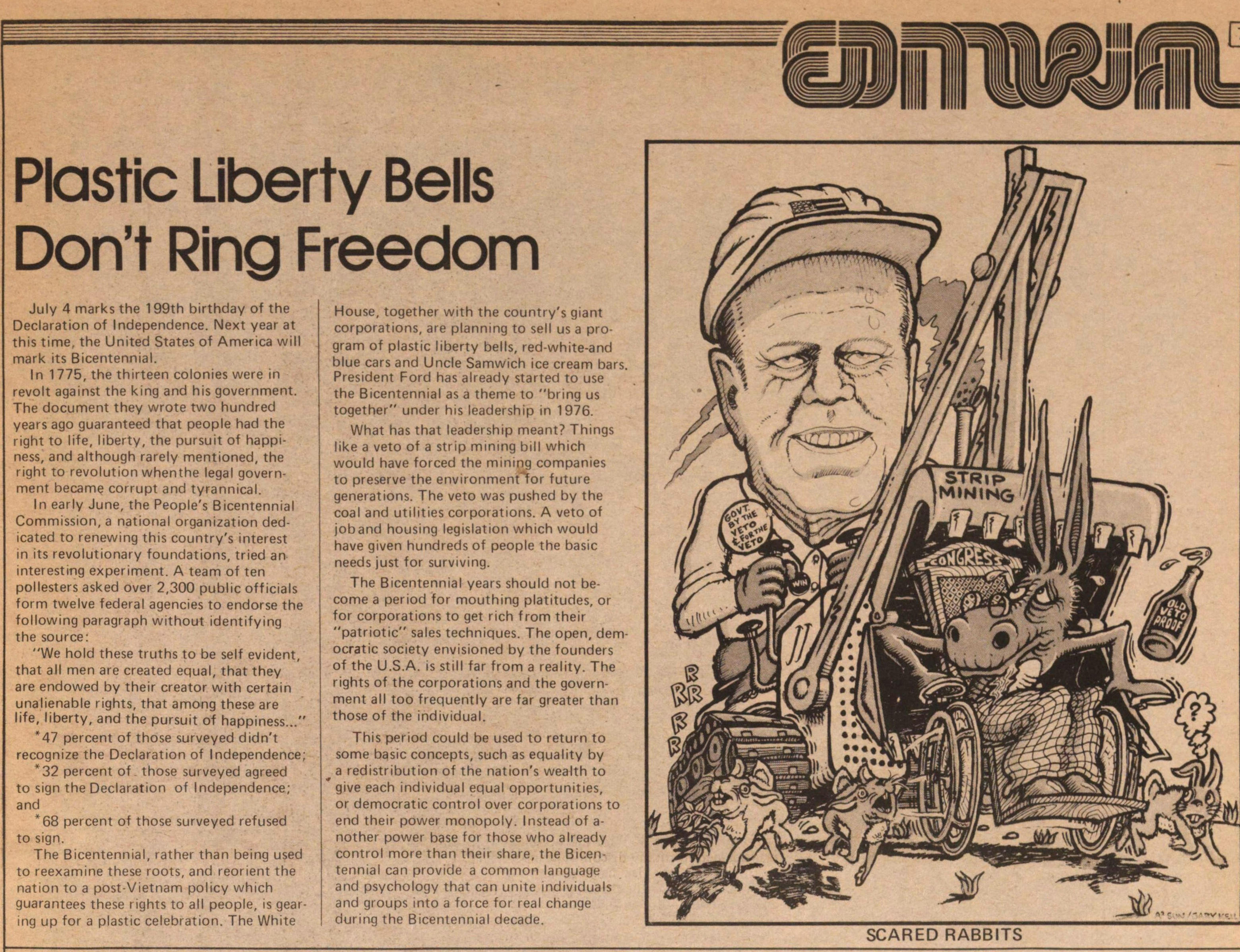 July 4 marks the 199th birthday of the Declaration of Independence. Next year at this time. the United States of America will mark its Bicentennial.

In 1775, the thirteen colonies were in revolt against the king and his government. The document they wrote two hundred years ago guaranteed that people had the right to life, liberty, the pursuit of happiness, and although rarely mentioned, the right to revolution when the legal government became corrupt and tyrannical.

In early June, the People's Bicentennial Commission, a national organization dedicated to renewing this country's interest in its revolutionary foundations, tried an interesting experiment. A team of ten pollesters asked over 2,300 public officials form twelve federal agencies to endorse the following paragraph without identifying the source:

"We hold these truths to be self evident, that all men are created equal, that they are endowed by their creator with certain unalienable rights, that among these are life, liberty, and the pursuit of happiness..."

47 percent of those surveyed didn't recognize the Declaration of Independence;

32 percent of those surveyed agreed to sign the Declaration of Independence; and

The Bicentennial, rather than being used to reexamine these roots, and reorient the nation to a post-Vietnam policy which guarantees these rights to all people, is gearing up for a plastic cetebration. The White House, together with the country's giant corporations, are planning to sell us a program of plastic liberty bells, red-white-and blue cars and Uncle Samwich ice cream bars. President Ford has already started to use the Bicentennial as a theme to "bring us together" under his leadership in 1976.

What has that leadership meant? Things like a veto of a strip mining bill which would have forced the mining companies to preserve the environment for future generations. The veto was pushed by the coal and utilities corporations. A veto of job and housing legislation which would have given hundreds of people the basic needs just for surviving.

The Bicentennial years should not become a period for mouthing platitudes, or for corporations to get rich from their "patriotic" sales techniques. The open, democratie society envisioned by the founders of the U.S.A. is still far from a reality. The rights of the corporations and the government all too frequently are far greater than those of the individual.

This period could be used to return to some basic concepts, such as equality by a redistribution of the nation's wealth to give each individual equal opportunities, or democratic control over corporations to end their power monopoly. Instead of another power base for those who already control more than their share, the Bicentennial can provide a common language and psychology that can unite individuals and groups into a force for real change during the Bicentennial decade.