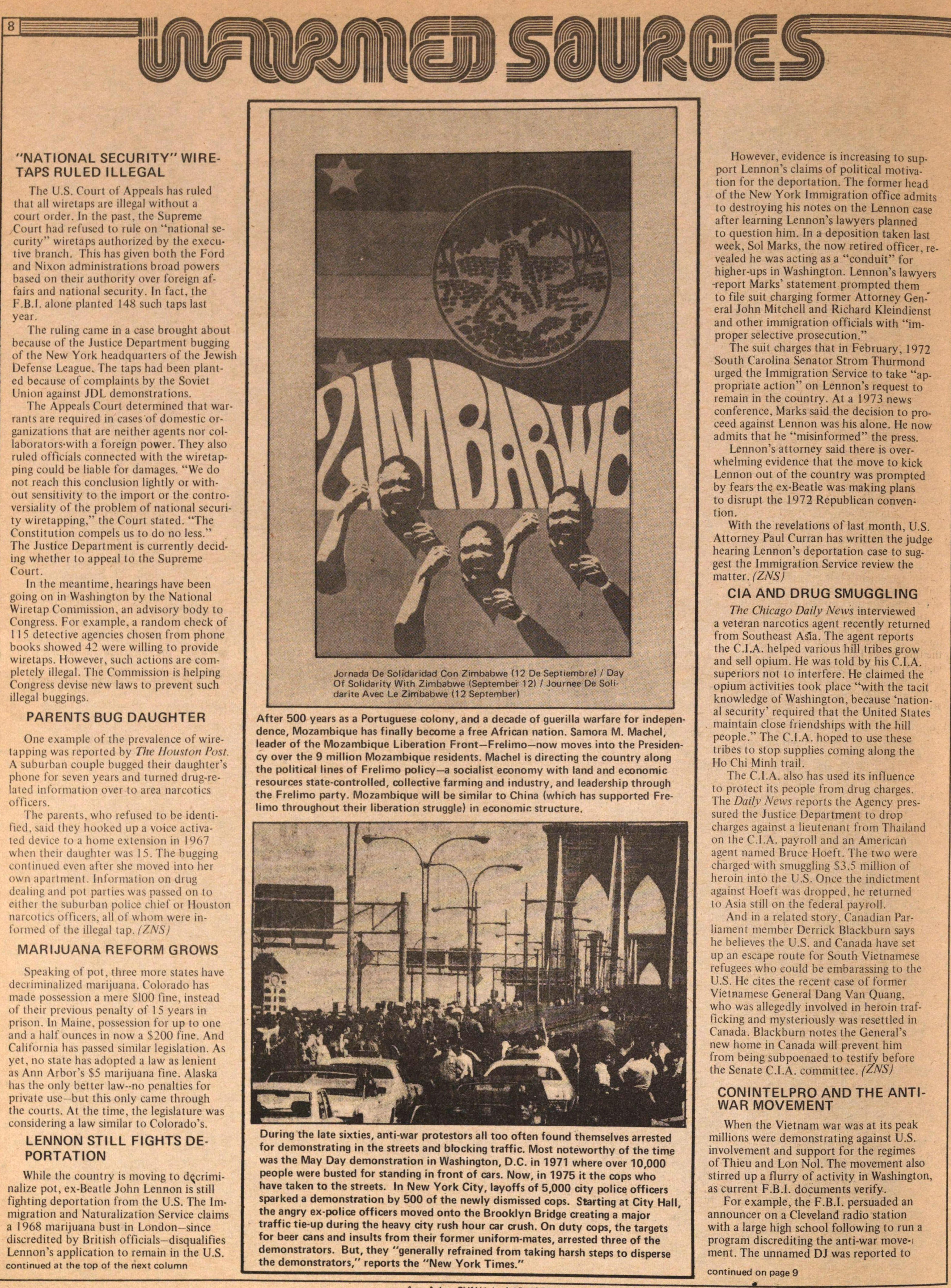 The U.S. Court of Appeals has ruled that all wiretaps are illegal without a court order. In the past, the Supreme Court had refused to rule on "national security" wiretaps authorized by the executive branch. This has given both the Ford and Nixon administrations broad powers based on their authority over foreign affairs and national security. In fact, the F.B.I. alone planted 148 such taps last year.

The ruling came in a case brought about because of the Justice Department bugging of the New York headquarters of the Jewish Defense League. The taps had been planted because of complaints by the Soviet Union against JDL demonstrations.

The Appeals Court determined that warrants are required in cases of domestic organizations that are neither agents nor collaborators with a foreign power. They also ruled officials connected with the wiretapping could be liable for damages. "We do not reach this conclusion lightly or without sensitivity to the import or the controversiality of the problem of national security wiretapping," the Courl stated. "The Constitution compels us to do no less." The Justice Department is currently deciding whether to appeal to the Supreme Court.

In the meantime. hearings have been going on in Washington by the National Wiretap Commission, an advisory body to Congress. For example. a random check of 115 detective agencies chosen from phone books showed 42 were willing to provide wiretaps. However, such actions are completely illegal. The Commission is helping Congress devise new laws to prevent such illegal buggings.

One example of the prevalence of wiretapping was reported by The Houston Post. A suburban couple bugged their daughter's phone tor seven years and turned drug-related information over to area narcotics officers.

The parents, who refused to be identified. said they hooked up a voice activated device to a home extension in l967 when their daughter was 15. The bugging continued even after she moved into her own apartment. Information on drug dealing and pot parties was passed on to either the suburban police chief or Houston narcotics officers, all of whom were informed of the illegal tap. (ZNS)

Speaking of pot, three more states have decriminalized marijuana. Colorado has made possession a mere $100 fine, instead of their previous penalty of 15 years in prison. In Maine. possession for up to one and a half ounces is now a $200 fine. And California has passed similar legislation. As yet. no state has adopted a law as lenient as Aun Arbor's $5 marijuana fine. Alaska has the only better law -- no penalties for private use -- but this only came through the courts. At the time, the legislature was considering a law similar to Colorado's.

While the country is moving to decriminalize pot, ex-Beatle John Lennon is still fighting deportation from the U.S. The Immigration and Naturalization Service claims a 1968 marijuana bust in London - since discredited by British officials - disqualifies Lennon's application to remain in the U.S.

continued at the top of the next column

However, evidence is increasing to support Lennon's claims of political motivation for the deportation. The former head of the New York Immigration office admits to destroying his notes on the Lennon case after learning Lennon's lawyers planned to question him. In a deposition taken last week, Sol Marks, the now retired officer, revealed he was acting as a "conduit" for higher-ups in Washington. Lennon's lawyers report Marks' statement prompted them to file suit charging former Attorney General John Mitchell and Richard Kleindienst and other immigration officials with "improper selective prosecution."

The suit charges that in February, 1972 South Carolina Senator Strom Thurmond urged the Immigration Service to take "appropriate action" on Lennon's request to remain in the country. At a 1973 news conference, Marks said the decision to proceed against Lennon was his alone. He now admits that he "misinformed" the press.

Lennon's attorney said there is overwhelming evidence that the move to kick Lennon out of the country was prompted by fears the ex-Beatle was making plans to disrupt the 1972 Republican convention.

The Chicago Daily News interviewed a veteran narcotics agent recently returned from Southeast Asia. The agent reports the C.I.A. helped various hill tribes grow and sell opium. He was told by his C.I.A. superiors not to interfere. He claimed the opium activities took place "with the tacit knowledge of Washington, because 'national security' required that the United States maintain close friendships with the hill people." The C.I.A. hoped to use these tribes to stop supplies coming along the Ho Chi Minh trail.

The C.I.A. also has used its influence to protect its people from drug charges. The Daily News reports the Agency pressured the Justice Department to drop charges against a lieutenant from Thailand on the C.I.A. payroll and an American agent named Bruce Hoeft. The two were charged with smuggling $3.5 million of heroin into the U.S. Once the indictment against Hoeft was dropped, he returned to Asia still on the federal payroll.

And in a related story, Canadian Parliament member Derrick Blackburn says he believes the U.S. and Canada have set up an escape route for South Vietnamese refugees who could be embarrassing to the U.S. He cites the recent case of former Vietnamese General Dang Van Quang. who was allegedly involved in heroin trafficking and mysteriously was resettled in Canada. Blackburn notes the General's new home in Canada will prevent him from being subpoenaed to testify before the Senate C.I.A. committee. (ZNS)

CONINTELPRO AND THE ANTIWAR MOVEMENT

When the Vietnam war was at its peak millions were demonstrating against U.S. involvement and support for the regimes of Thieu and Lon Nol. The movement also stirred up a flurry of activity in Washington, as current F.B.I. documents verify.

For example, the F.B.I. persuaded an announcer on a Cleveland radio station with a large high school following to run a program discrediting the anti-war movement. The unnamed DJ was reported to

have "a great deal of influence with persons of his age group." At the time, an anti-war convention was going on in Cleveland.

In another case, the F.B.i. secretly published and financed phony college newspapers for the same reason. At Indiana University in Bloomington, "The Armageddon News" was supported by the F.B.I. while supposedly coming from "concerned students."" At American University in Washington, D.C.. it was the "Rational Observer."

As if this weren't enough, the F.B.I. sent letters to the parents of anti-war students to attempt to stop demonstrations. One set of letters went to the parents of students involved in a hunger strike at Oberiin College in Ohio. Steven Eipper's parents were told, "I also oppose this war. But I tried to convince Steve that fasting to express opposition can only lead lo injury....Obviously, my efforts have been unsuccessful and l am concerned to the point where I am reluctantly writing this letter to you." The letter says "left wing students" are behind the demonstrations, and "they are cynically using Steve and others for purposes that go far beyond opposition to the war." The F.B.I. signed itself. "a concerned student." (ZNS)

The parents of four students killed in an anti-war demonstration at Kent State continue their struggle for justice, as their civil suit against the National Guard drags on.

Last week, former guard captain J. Ronald Snyder admitted he lied about finding a gun on one of the dead students' bodies. The gun, with an unworkable and rusted trigger mechanism had been found somewhere on campus but not near Jeffrey Miller's body as Snyder had previously claimed. Snyder admitted he first mentioned the gun two months after the shooting to fellow guardsmen concerned with potential legal action against them. He was forced to stick with the story when guard superiors heard and used the story to perpetuate the theory the guards had fired in self-defense.

The trial is still going on before an Ohio jury, and is expected to run through August.

SOLAR POWER TO GET INCREASED FUNDING

The Energy Research and Development Administration released a new energy development plan that assigns new funding to solar and other alternative sources of energy. It also recommends more efforts in fuel conservation.

But while it promises these measures as future solutions to decreasing oil supplies with solar energy slated as a major energy source of the 21 st century, ERDA maintains coal and nuclear power are the short-term solutions for this century.

In presenting the report, ERDA administrator Robert C. Seamans, Jr. also rejected the controversial "breeder" nuclear reactor as a solution to the nation's energy future. The report said the U.S. should not place all its resources into one energy source as has been done in the past. Funding for breeder development was cut, and Seaman's admitted more research on safety was necessary before such a product should go ahead. The country's first breeder is not expected to be in operation lot al least another ten years.

While President Ford and his advisors have been busy assuring the nation that the recession is over and good times are ahead, the cities in the U.S. are sinking ever deeper into debt.

The major example is New York, where over 27,000 city employees were laid off July 1 to meet the city's "crisis budget." Sanitation workers immediate!y went on strike, and laid-off police officers demonstrated in the streets. Employees of city drawbridges have been laid off, and the Coast Guard is complaining because ships cannot gel through, Other city unions are considering actions and could ultimately create a major crisis in the world's largest city. With little hope of additional funds from Washington or the state's capital, New York may potentially be forced to declare martial law to keep the city functioning. Already garbage is becoming a serious health problem.

Detroit also began its layoffs to balance the budget tor the 1975-76 fiscal year. Up to 10.000 city employees may end up out of work adding to the already high unemployment in the Motor City.

Locally, Ann Arbor is also being forced to lay off employees, here only a few dozen but a good chunk of the city's work force. As in other cities, services will suffer with less employees to do the needed work.

Cities are not the only problem. In Pennsylvania, massive layoffs of State employees to cut costs provoked massive strikes by hospital, welfare and other employees. Payment of welfare and unemployment checks has come to a halt and state hospitals are functioning with only supervisory personnel.

The sinking city and state economies indicate a deeper economic problem than has yet been suggested by national economic advisors. Critical services from fire protection and garbage pickup to water and sewage facilities all operate through city governments. Cutbacks in these basic areas suggest even greater hardships than those faced during the "great depression" of the thirties. So far. the Ford administration has refused any financial aid to ease the plight of local governments.