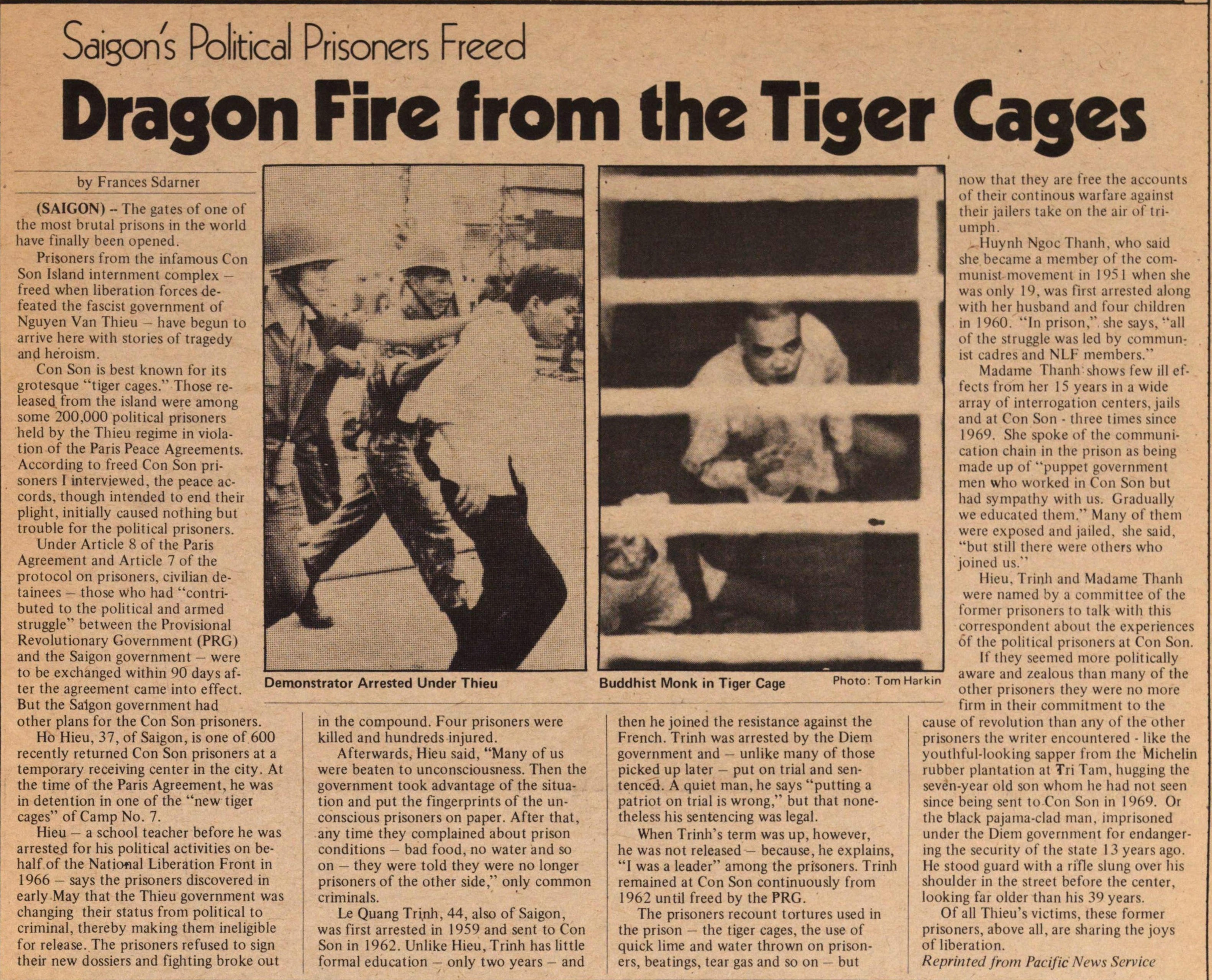 (SAIGON) - The gates of one of the most brutal prisons in the world have finally been opened.

Prisoners from the infamous Con  Son Island internment complex - freed when liberation forces defeated the fascist government of Nguyen Van Thieu - have begun to arrive here with stories of tragedy and heroism.

Con Son is best known for its grotesque "tiger cages." Those released. from the island were among some 200,000 political prisoners held by the Thieu regime in violation of the Paris Peace Agreements. According to freed Con Son prisoners I interviewed, the peace accords, though intended to end their plight, initially caused nothing but trouble for the political prisoners.

Under Article 8 of the Paris Agreement and Article 7 of the protocol on prisoners. civilian detainees - those who had "contributed to the political and armed struggle" between the Provisional Revolutionary Government (PRG) and the Saigon government - were to be exchanged within 90 days after the agreement carne into effect. But the Saigon government had other plans for the Con Son prisoners.

Ho Hieu. 37, of Saigon, is one of 600 recently returned Con Son prisoners at a temporary receiving center in the city. At the time of the Paris Agreement, he was in detention in one of the "new tiger cages" of Camp No. 7.

Hieu - a school teacher before he was arrested for his political activities on behalf of the National Liberation Front in 1966 - says the prisoners discovered in early May that the Thieu government was changing their status from political to criminal, thereby making them ineligible for release. The prisoners refused to sign their new dossiers and fighting broke out in the compound. Four prisoners were killed and hundreds injured.

Afterwards, Hieu said, "Many of us were beaten to unconsciousness. Then the government took advantage of the situation and put the fingerprints of the unconscious prisoners on paper. After that, any time they complained about prison conditions - bad food, no water and so on - they were told they were no longer prisoners of the other side," only common criminals.

Le Quang Trinh, 44, also of Saigon, was first arrested in 1959 and sent to Con Son in 1962. Unlike Hieu, Trinh has little formal education - only two years - and then he joined the resistance against the French. Trinh was arrested by the Diem government and - unlike many of those picked up later - put on trial and sentenced. A quiet man, he says "putting a patriot on trial is wrong," but that nonetheless his sentencing was legal.

When Trinh's term was up, however, he was not released - because, he explains, "I was a leader" among the prisoners. Trinh remained at Con Son continuously from 1962 until freed by the PRG.

The prisoners recount tortures used in the prison - the tiger cages, the use of quick lime and water thrown on prisoners, beatings, tear gas and so on but now that they are free the accounts of their continuous warfare against their jailers takes on the air of triumph.

Huynh Ngoc Thanh, who said she became a meinber of the communist movement in 1951 when she was only 19, was first arrested along with lier husband and tour children in 1960. "In prison." she says, "all of the struggle was led by communist cadres and NLF members."

Madame Thanh shows few ill effects from her 15 years in a wide array of interrogation centers, jails and at Con Son - three times since 1969. She spoke of the communication chain in the prison as being made up of "puppet government men who worked in Con Son but had sympathy with us. Gradually we educated them." Many of them were exposed and jailed, she said, "but still there were others who joined us."

Hieu. Trinh and Madame Thanh were named by a committee of the former prisoners to talk with this correspondent about the experiences of the political prisoners at Con Son.

If they seemed more politically aware and zealous than many of the other prisoners they were no more firm in their commitment to the cause of revolution than any of the other prisoners the writer encountered - like the youthful-looking sapper from the Michelin rubber plantation at Tri Tam, hugging the seven-year old son whom he had not seen since being sent to Con Son in 1969. Or the black pajama-clad man, imprisoned under the Diem government for endangering the security of the state 13 years ago. He stood guard with a rifle slung over his shoulder in the street before the center, looking far older than his 39 years.

Of all Thieu's victims, these former prisoners, above all, are sharing the joys of liberation.