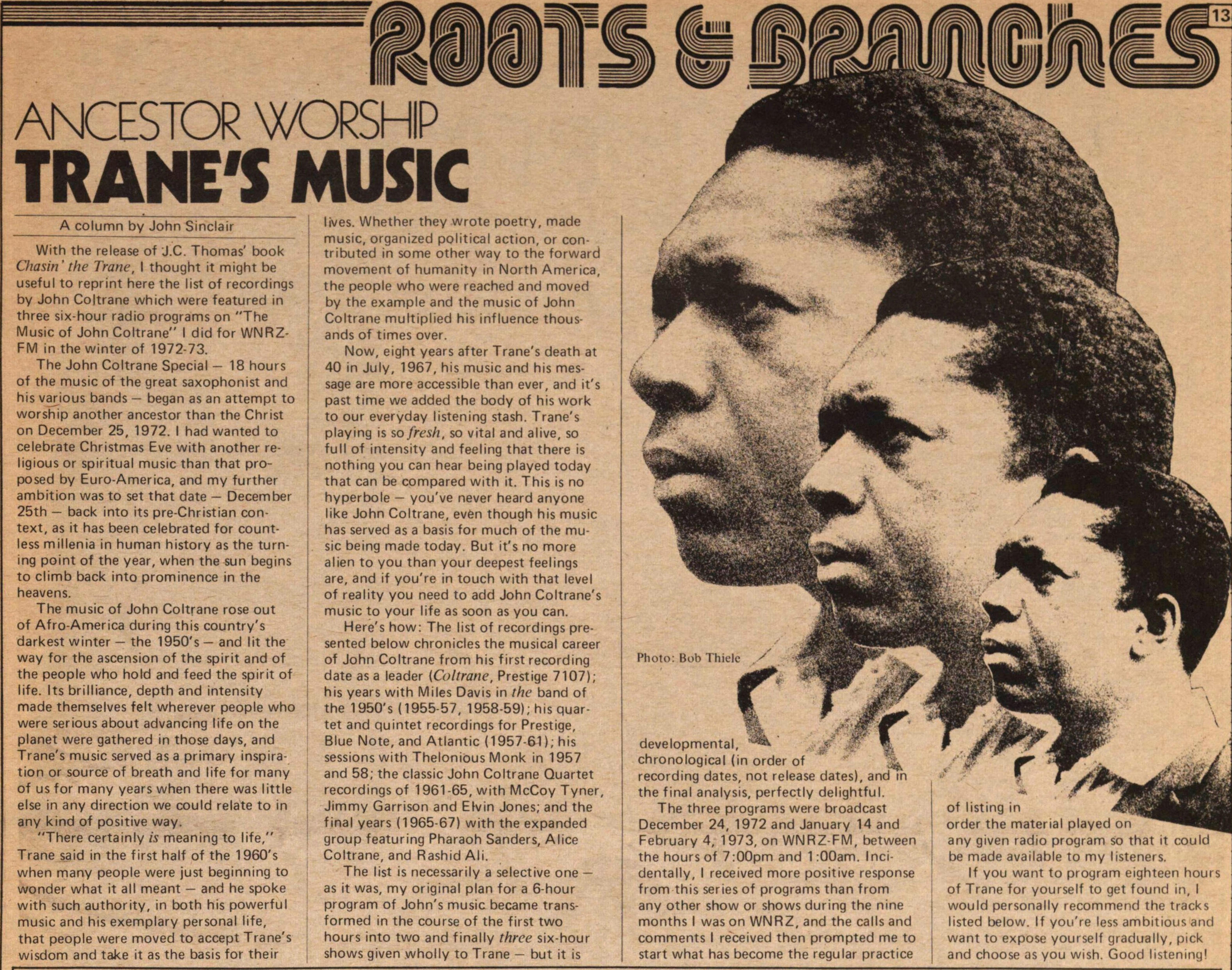 With the release of J.C. Thomas' book Chasin' the Trane, I thought it might be useful to reprint here the list of recordings by John Coltrane which were featured in three six-hour radio programs on "The Music of John Coltrane" I did for WNRZFM in the winter of 1972-73.

The John Coltrane Special - 18 hours of the music of the great saxophonist and his various bands - began as an attempt to worship another ancestor than the Christ on December 25, 1972. I had wanted to celebrate Christmas Eve with another religious or spiritual music than that proposed by Euro-America, and my further ambition was to set that date - December 25th - back into its pre-Christian context, as it has been celebrated for countless millennia in human history as the turning point of the year, when the sun begins to climb back into prominence in the heavens.

The music of John Coltrane rose out of Afro-America during this country's darkest winter - the 1950's - and lit the way for the ascension of the spirit and of the people who hold and feed the spirit of life. Its brilliance, depth and intensity made themselves felt wherever people who were serious about advancing life on the planet were gathered in those days, and Trane's music served as a primary inspiration or source of breath and life for many of us for many years when there was little else in any direction we could relate to in any kind of positive way.

"There certainly is meaning to life," Trane said in the first half of the 1960's when many people were just beginning to wonder what it all meant - and he spoke with such authority, in both his powerful music and his exemplary personal life, that people were moved to accept Trane's wisdom and take it as the basis for their Iives. Whether they wrote poetry, made music, organized political action, or contributed in some other way to the forward movement of humanity in North America, the people who were reached and moved by the example and the music of John Coltrane multiplied his influence thousands of times over.

Now, eight years after Trane's death at 40 in July, 1967, his music and his message are more accessible than ever, and it's past time we added the body of his work to our everyday listening stash. Trane's playing is so fresh, so vital and alive, so full of intensity and feeling that there is nothing you can hear being played today that can be compared with it. This is no hyperbole - you've never heard anyone like John Coltrane, even though his music has served as a basis for much of the music being made today. But it's no more alien to you than your deepest feelings are, and if you're in touch with that level of reality you need to add John Coltrane's music to your life as soon as you can.

Here's how: The list of recordings presented below chronicles the musical career of John Coltrane from his first recording date as a leader (Coltrane, Prestige 7107); his years with Miles Davis in the band of the 1950's (1955-57, 1958-59); his quartet and quintet recordings for Prestige, Blue Note, and Atlantic (1957-61); his sessions with Thelonious Monk in 1957 and 58; the classic John Coltrane Quartet recordings of 1961-65, with McCoy Tyner, Jimmy Garrison and Elvin Jones; and the final years (1965-67) with the expanded group featuring Pharaoh Sanders, Alice Coltrane, and Rashid Ali.

The list is necessarily a selective one - as it was, my original plan for a 6-hour program of John's music became transformed in the course of the first two hours into two and finally three six-hour shows given wholly to Trane - but its developmental, "chronological (in order of recording dates, not release dates), and in the final analysis, perfectly delightful.

The three programs were broadcast December 24, 1972 and January 14 and February 4, 1973, on WNRZ-FM, between the hours of 7:00pm and 1:00am. Incidentally, I received more positive response from this series of programs than from any other show or shows during the nine months I was on WNRZ, and the calls and comments I received then prompted me to start what has become the regular practice of listing in order the material played on any given radio program so that it could be made available to my listeners. If you want to program eighteen hours of Trane for yourself to get found in, I would personally recommend the tracks listed below. If you're less ambitious and want to expose yourself gradually, pick and choose as you wish. Good listening!