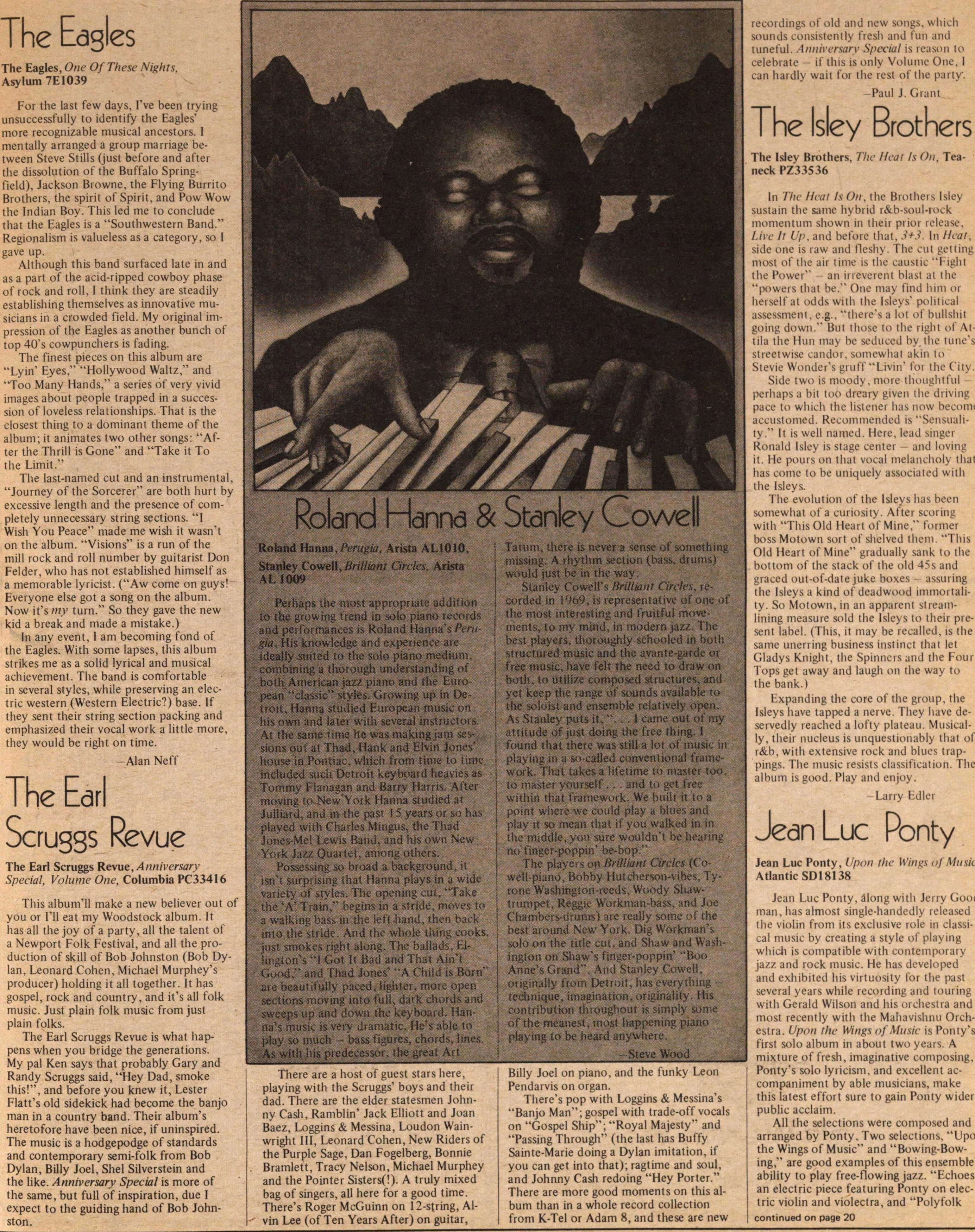 This album'll make a new believer out of you or I'll eat my Woodstock album. It has all the joy of a party, all the talent of a Newport Folk Festival, and all the production of skill of Bob Johnston (Bob Dylan, Leonard Cohen, Michael Murphey's producer) holding it all together. It has gospel, rock and country, and it's all folk music. Just plain folk music from just plain folks.

The Earl Scruggs Revue is what happens when you bridge the generations. My pal Ken says that probably Gary and Randy Scruggs said, "Hey Dad, smoke this!", and before you knew it, Lester Flatt's old sidekick had become the banjo man in a country band. Their album's heretofore have been nice, if uninspired. The music is a hodgepodge of standards and contemporary semi-folk from Bob Dylan, Billy Joel, Shel Silverstein and the like. Anniversary Special is more of the same, but full of inspiration, due I expect to the guiding hand of Bob Johnston.

There are a host of guest stars here, playing with the Scruggs' boys and their dad. There are the elder statesmen Johnny Cash, Ramblin' Jack Elliott and Joan Baez, Loggins & Messina, Loudon Wainwright III, Leonard Cohen, New Riders of the Purple Sage, Dan Fogelberg, Bonnie Bramlett, Tracy Nelson, Michael Murphey and the Pointer Sisters(!). A truly mixed bag of singers, all here for a good time. There's Roger McGuinn on 12-string, Alvin Lee (of Ten Years After) on guitar, Billy Joel on piano, and the funky Leon Pendarvis on organ.

There's pop with Loggins & Messina's "Banjo Man"; gospel with trade-off vocals on "Gospel Ship"; "Royal Majesty" and "Passing Through" (the last has Buffy Sainte-Marie doing a Dylan imitation, if you can get into that); ragtime and soul, and Johnny Cash redoing "Hey Porter." There are more good moments on this album than in a whole record collection from K-Tel or Adam 8, and these are new recordings of old and new songs, which sounds consistently fresh and Fun and tuneful. Anniversary Special is reason to celebrate - if this is only Volume One, I can hardly wait tor the rest of the party.