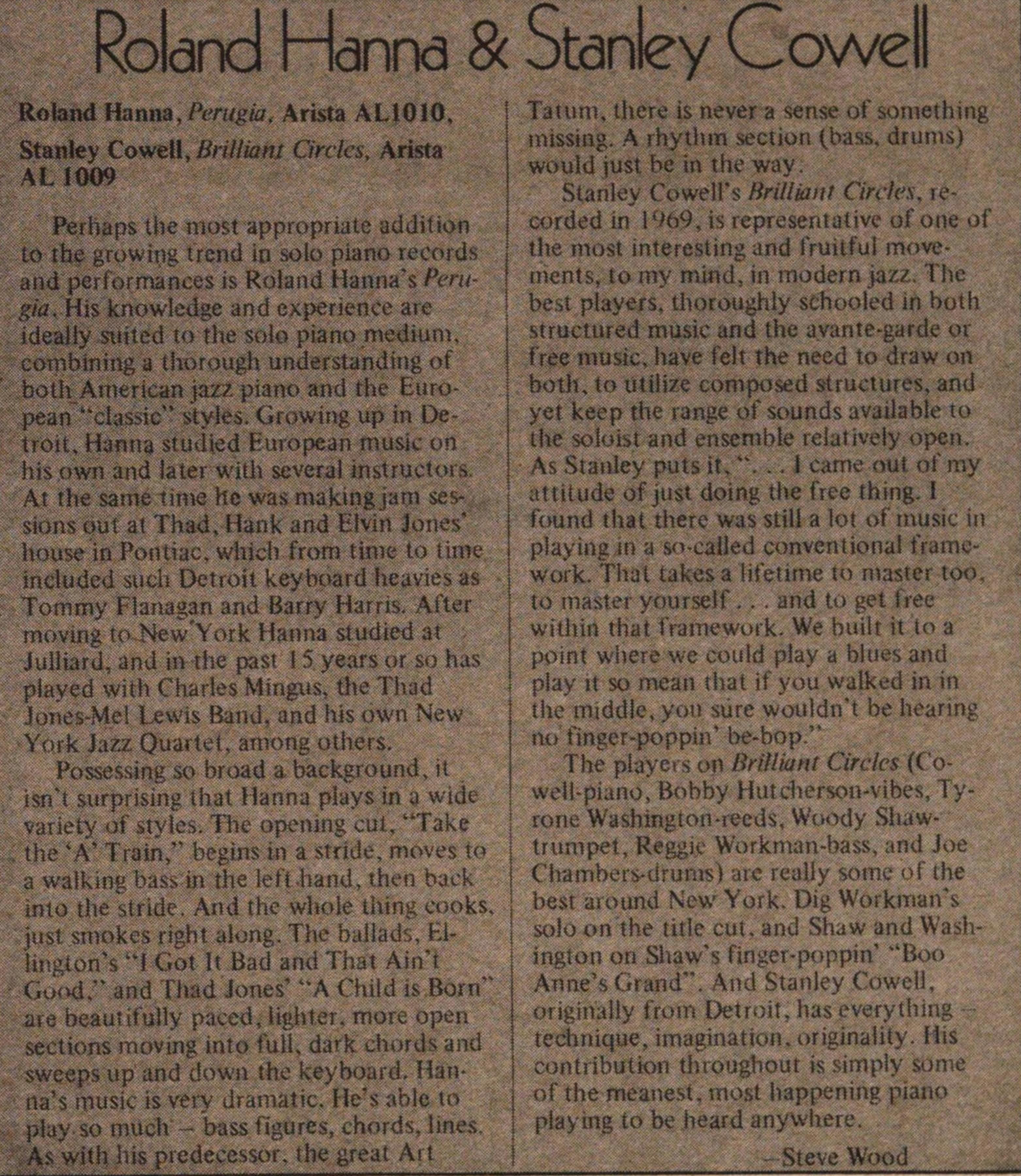 Perhaps the most appropriate addition to the growing trend in solo piano records and performances is Roland Hanna's Perugia. His knowledge and experience are ideally suited to the solo piano medium, combining a thorough understanding of both American jazz piano and the European "classic" styles.. Growing up in Detroit, Hanna studied European music on his own and later with several instructors.  At the same time, he was making jam sessions out at Thad, Hank and Elvin Jones' house in Pontiac, which from time to time included such Detroit keyboard heavies as Tommy Flanagan and Barry Harris. After moving to New York,  Hanna studied at Julliard, and in the past 15 years or so has played with Charles Mingus, the Thad Jones-Mel Lewis Band, and his own New York Jazz Quartet, among others.

Possessing so broad a background, it isn't surprising that Hanna plays in a wide variety of styles. The opening cut, "Take the 'A' Train," begins in a stride, moves to a walking bass in the left hand, then back into the stride. And the whole thing cooks, just smokes right along. The ballads, Ellington's "I Got It Bad and That Ain't Good," and Thad Jones' "A Child is Born" are beautifully paced, lighter, more open sections moving into full, dark chords and sweeps up and down the keyboard. Hanna's music is very dramatic. He's able to play so much - bass figures, chords, lines. As with his predecessor, the great Art Tatum, there is never a sense of something missing. A rhythm section(bass, drums) would just be in the way.

Stanley Cowett's Brilliant Circles, recorded in l969, is representative of one of the most interesting and fruitful movements, to my mind, in modern jazz. The best players, thoroughly schooled in both structured music and the avante-garde or free music, have felt the need to draw on both, to utilize composed structures, and yet keep the range of sounds available to the soloist and ensemble relatively open. As Stanley puts it, '...I came out of my attitude of just doing the free thing. I found that there was still a lot of music in playing in a so-called conventional  framework. That takes a lifetime to master, too. to master yourself . . . and to get free within that Framework. We built it to a point where we could play a blues and play it so mean that if you walked in in the middle, you sure wouldn't be hearing no finger-poppin' be-bop."

The players on Brilliant Circles (Cowett-piano, Bobby Hutcherson-vibe, Tyrone Washington-reeds, Woody Shaw-trumpet, Reggie Workman-bass, and Joe Chambers-drums) are really some of the best around New York. Dig Workman's solo on the title cut, and Shaw and Washington on Shaw's finger-poppin' "Boo Anne's Grand". And Stanley Cowett, originally from Detroit, has everything - technique, imagination, originality. His contribution throughout is simply some of the meanest, most happening piano playing to be heard anywhere.