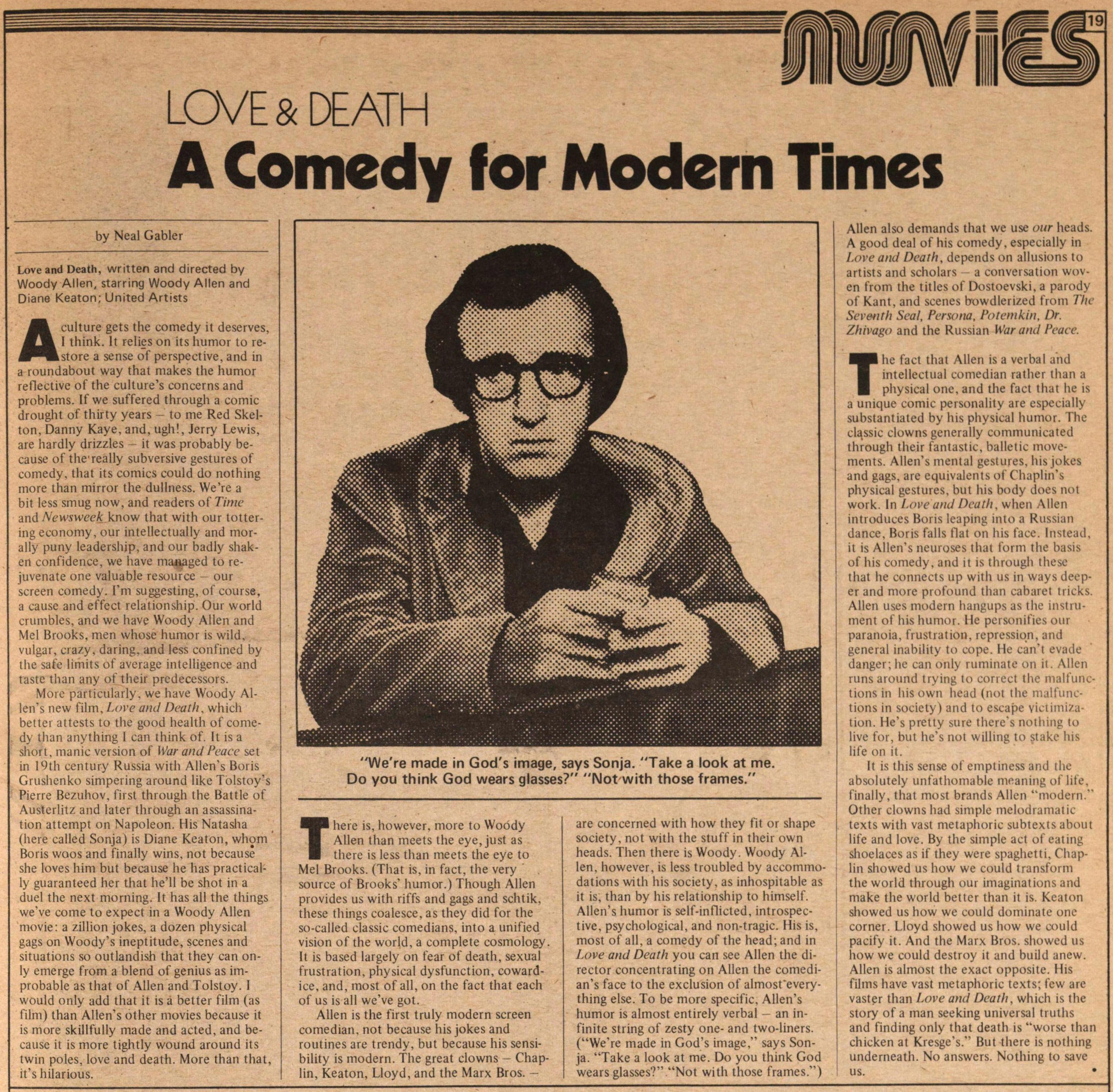 A culture gets the comedy it deserves, I think. It relies on its humor to restore a sense of perspective, and in a roundabout way that makes the humor reflective of the culture's concerns and problems. If we suffered through a comic drought of thirty years - to me Red Skelton, Danny Kaye, and, ugh!, Jerry Lewis, are hardly drizzles - it was probably because of the really subversive gestures of comedy, that its comics could do nothing more than mirror the dullness. We're a bit less smug now, and readers of Time and Newsweek know that with our tottering economy, our intellectually and morally puny leadership, and our badly shaken confidence, we have managed to rejuvenate one valuable resource - our screen comedy. I'm suggesting, of course, a cause and effect relationship. Our world crumbles, and we have Woody Allen and Mel Brooks, men whose humor is wild, vulgar, crazy, daring, and less confined by the safe limits of average intelligence and taste than any of their predecessors.

More particularly, we have Woody Allen"s new film, Love and Death, which better attests to the good health of comedy than anything I can think of. It is a short, manic version of War and Peace set in 19th century Russia with Allen's Boris Grushenko simpering around like Tolstoy's Pierre Bezuhov, first through the Battle of Austerlitz and later through an assassination attempt on Napoleon. His Natasha (here called Sonja) is Diane Keaton, whom Boris woos and finally wins, not because she loves him, but because he has practically guaranteed her that he'll be shot in a duel the next morning. It has all the things we've come to expect in a Woody Allen movie: a zillion jokes, a dozen physical gags on Woody's ineptitude, scenes and situations so outlandish that they can only emerge from a blend of genius as improbable as that of Allen and Tolstoy. I would only add that it is a better film (as film) than Allen's other movies because it is more skillfully made and acted, and because it is more tightly wound around its twin poles, love and death. More than that, it's hilarious.

There is, however, more to Woody Allen than meets the eye, just as there is less than meets the eye to Mel Brooks. (That is, in fact, the very source of Brooks' humor.) Though Allen provides us with riffs and gags and schtik, these things coalesce, as they did for the so-called classic comedians, into a unified vision of the world, a complete cosmology. It is based largely on fear of death, sexual frustration, physical dysfunction, cowardice, and, most of all, on the fact that each of us is all we've got.

Allen is the first truly modern screen comedian, not because his jokes and routines are trendy, but because his sensibility is modern. The great clowns - Chaplin, Keaton, Lloyd, and the Marx Bros. - are concerned with how they fit or shape society, not with the stuff in their own heads. Then there is Woody. Woody Allen, however, is less troubled by accommodations with his society, as inhospitable as it is, than by his relationship to himself. Allen's humor is self-inflicted, introspective, psychological, and non-tragic. His is, most of all, a comedy of the head; and in Love and Death you can see Allen the director concentrating on Allen the comedian's face to the exclusion of almost everything else. To be more specific, Allen's humor is almost entirely verbal - an infinite string of zesty and two-liners. ("We're made in God's image," says Sonja. "Take a look at me. Do you think God wears glasses?" "Not with those frames.") Allen also demands that we use our heads. A good deal of his comedy, especially in Love and Death, depends on allusions to artists and scholars conversation woven from the titles of Dostoevski, a parody of Kant, and scenes bowdlerized from The Seventh Seal, Persona, Potemkin, Dr. Zhivago and the Russian War and Peace.

The fact that Allen is a verbal and intellectual comedian rather than a physical one, and the fact that he is a unique comic personality are especially substantiated by his physical humor. The classic clowns generally communicated through their fantastic, balletic movements. Allen's mental gestures, his jokes and gags, are equivalent of Chaplin's physical gestures, but his body does not work. In Love and Death, when Allen introduces Boris leaping into a Russian dance, Boris falls flat on his face. Instead, it is Allen's neuroses that form the basis of his comedy,  and it is through these that he connects up with us in ways deeper and more profound than cabaret tricks. Allen uses modern hangups as the instrument of his humor. He personifies our paranoia, frustration, repression, and general inability to cope. He can't evade danger; he can only ruminate on it. Allen runs around trying to correct the malfunctions in his own head (not the malfunctions in society) and to escape victimization. He's pretty sure there's nothing to live for, but he's not willing to stake his life on it.