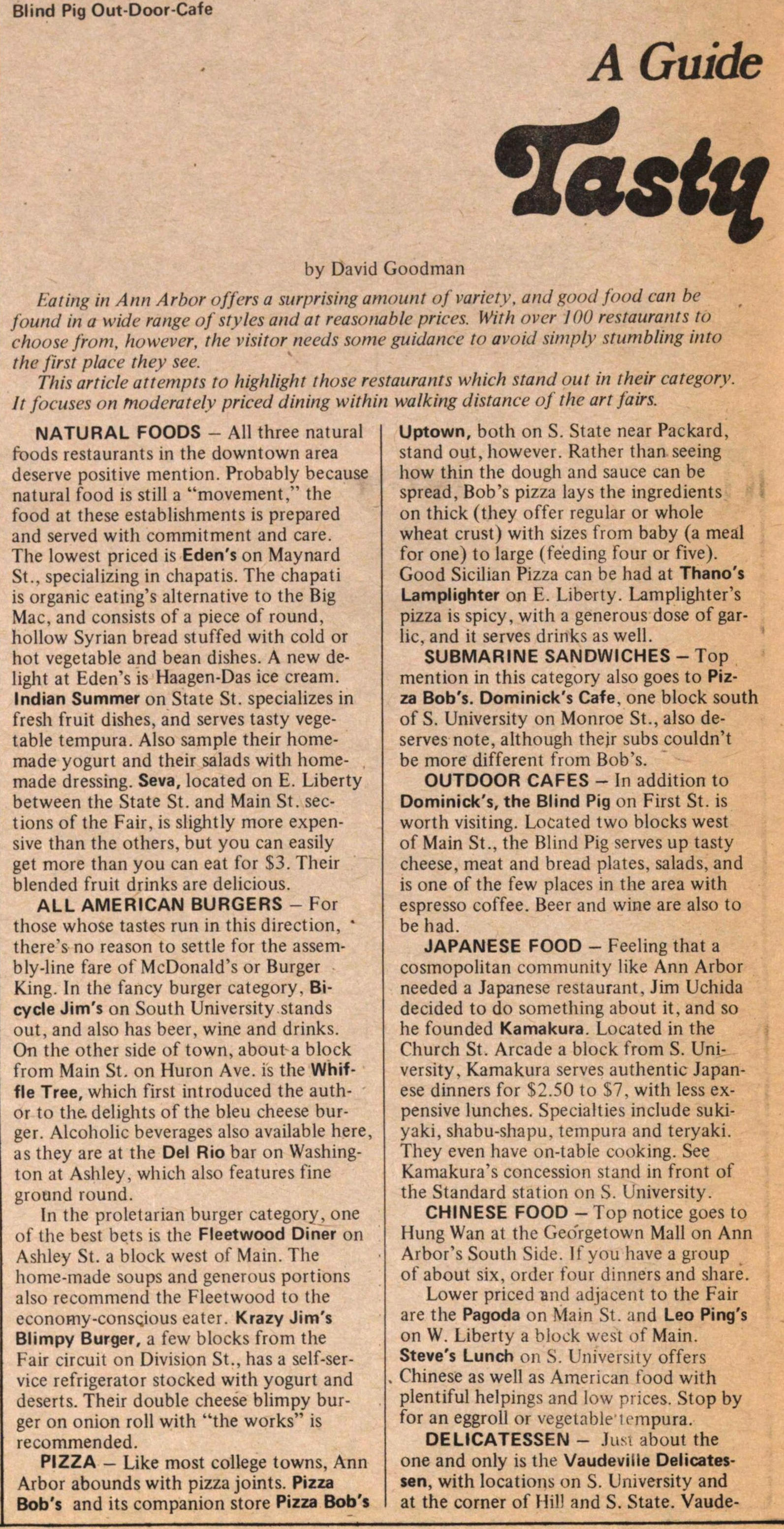 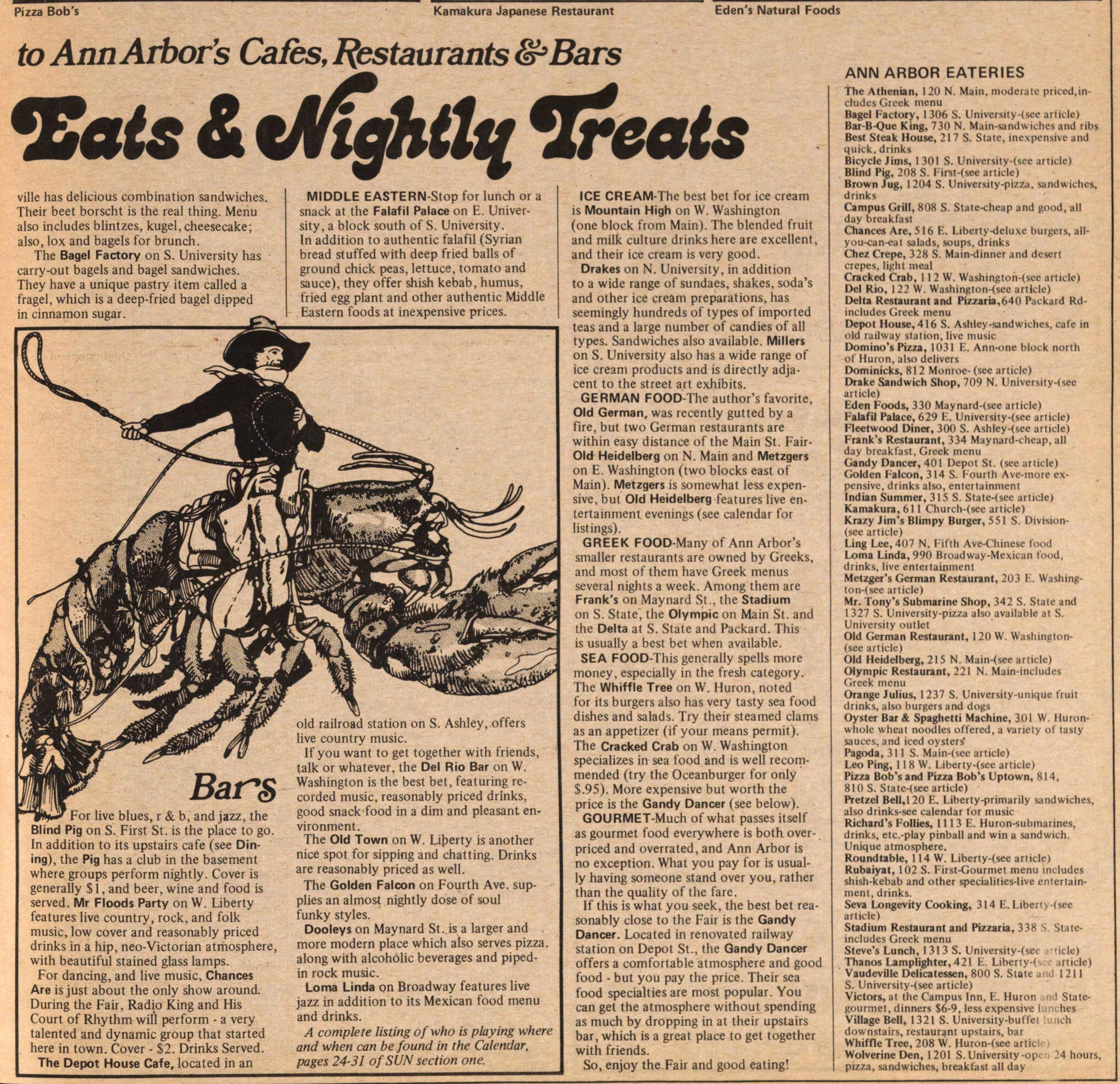 Eating in Ann Arbor offers a surprising amount of variety, and good food can be found in a wide range of styles and at reasonable prices. With over 100 restaurants to choose from, however, the visitor needs some guidance to avoid simply stumbling into the first place they see.

This article attempts to highlight those restaurants which stand out in their category. It focuses on moderately priced dining within walking distance of the art fairs.

NATURAL FOODS - All three natural foods restaurants in the downtown area deserve positive mention. Probably because natural food is still a "movement," the food at these establishments is prepared and served with commitment and care. The lowest priced is Eden's on Maynard St., specializing in chapatis. The chapati is organic eating's alternative to the Big Mac, and consists of a piece of round, hollow Syrian bread stuffed with cold or hot vegetable and bean dishes. A new delight at Eden's is Haagen-Das ice cream. Indian Summer on State St. specializes in fresh fruit dishes, and serves tasty vegetable tempura. Also sample their homemade yogurt and their salads with homemade dressing. Seva, located on E. Liberty between the State St. and Main St. sections of the Fair, is slightly more expensive than the others, but you can easily get more than you can eat for $3. Their blended fruit drinks are delicious.

ALL AMERICAN BURGERS - For those whose tastes run in this direction, ' there's no reason to settle for the assembly-line fare of McDonald's or Burger King. In the fancy burger category, Bicycle Jim's on South University stands out, and also has beer, wine and drinks. On the other side of town, about a block from Main St. on Huron Ave. is the Whiffle Tree, which first introduced the author to the delights of the bleu cheese burger. Alcoholic beverages also available here, as they are at the Del Rio bar on Washington at Ashley, which also features fine ground round.

In the proletarian burger category, one of the best bets is the Fleetwood Diner on Ashley St. a block west of Main. The home-made soups and generous portions also recommend the Fleetwood to the economy-conscjous eater. Krazy Jim's Blimpy Burger, a few blocks from the Fair circuit on Division St., has a self-service refrigerator stocked with yogurt and deserts. Their double cheese blimpy burger on onion roll with "the works" is recommended.

PIZZA - Like most college towns, Ann Arbor abounds with pizza joints. Pizza Bob's and its companion store Pizza Bob's Uptown, both on S. State near Packard, stand out, however. Rather than seeing how thin the dough and sauce can be spread, Bob's pizza lays the ingredients on thick (they offer regular or whole wheat crust) with sizes from baby (a meal for one) to large (feeding four or five). Good Sicilian Pizza can be had at Thano's Lamplighter on E. Liberty. Lamplighter's pizza is spicy, with a generous dose of garlic, and it serves drinks as well.

OUTDOOR CAFES - In addition to Dominick's, the Blind Pig on First St. is worth visiting. Located two blocks west of Main St., the Blind Pig serves up tasty cheese, meat and bread plates, salads, and is one of the few places in the area with espresso coffee. Beer and wine are also to be had.

JAPANESE FOOD - Feeling that a cosmopolitan community like Ann Arbor needed a Japanese restaurant, Jim Uchida decided to do something about it, and so he founded Kamakura. Located in the Church St. Arcade a block from S. University, Kamakura serves authentic Japanese dinners for $2.50 to $7, with less expensive lunches. Specialties include sukiyaki, shabu-shapu, tempura and teryaki. They even have on-table cooking. See Kamakura's concession stand in front of the Standard station on S. University.

CHINESE FOOD - Top notice goes to Hung Wan at the Georgetown Mall on Ann Arbor's South Side. If you have a group of about six, order four dinners and share.

Lower priced and adjacent to the Fair are the Pagoda on Main St. and Leo Ping's on W. Liberty a block west of Main. Steve's Lunch on S. University offers Chinese as well as American food with plentiful helpings and low prices. Stop by for an eggroll or vegetable' tempura.

DELICATESSEN - Jus, about the one and only is the Vaudeviile Delicatessen, with locations on S. University and at the corner of Hill and S. State. Vaudeville has delicious combination sandwiches. Their beet borscht is the real thing. Menu also includes blintzes, kugel, cheesecake; also, lox and bagels for brunch.

The Bagel Factory on S. University has carry-out bagels and bagel sandwiches. They have a unique pastry item called a fragel, which is a deep-fried bagel dipped in cinnamon sugar.

ICE CREAM-The best bet for ice cream is Mountain High on W. Washington (one block from Main). The blended fruit and milk culture drinks here are excellent, and their ice cream is very good. Drakes on N. University, in addition to a wide range of sundaes, shakes, soda's and other ice cream preparations, has seemingly hundreds of types of imported teas and a large number of candies of all types. Sandwiches also available. Millers on S. University also has a wide range of ice cream products and is directly adjacent to the street art exhibits.

GREEK FOOD-Many of Ann Arbor's smaller restaurants are owned by Greeks, and most of them have Greek menus several nights a week. Among them are Frank's on Maynard St., the Stadium on S. State, the Olympic on Main St. and the Delta at S. State and Packard. This is usually a best bet when available.

SEA FOOD-This generally spells more money, especially in the fresh category. The Whiffle Tree on W. Huron, noted for its burgers also has very tasty sea food dishes and salads. Try their steamed clams as an appetizer (if your means permit). The Cracked Crab on W. Washington specializes in sea food and is well recommended (try the Oceanburger for only $.95). More expensive but worth the price is the Gandy Dancer (see below).

GOURMET-Much of what passes itself as gourmet food everywhere is both overpriced and overrated, and Ann Arbor is no exception. What you pay for is usually having someone stand over you, rather than the quality of the fare.

If this is what you seek, the best bet reasonably close to the Fair is the Gandy Dancer. Located in renovated railway station on Depot St., the Gandy Dancer offers a comfortable atmosphere and good food - but you pay the price. Their sea food specialties are most popular. You can get the atmosphere without spending as much by dropping in at their upstairs bar, which is a great place to get together with friends. So, enjoy the Fair and good eating!