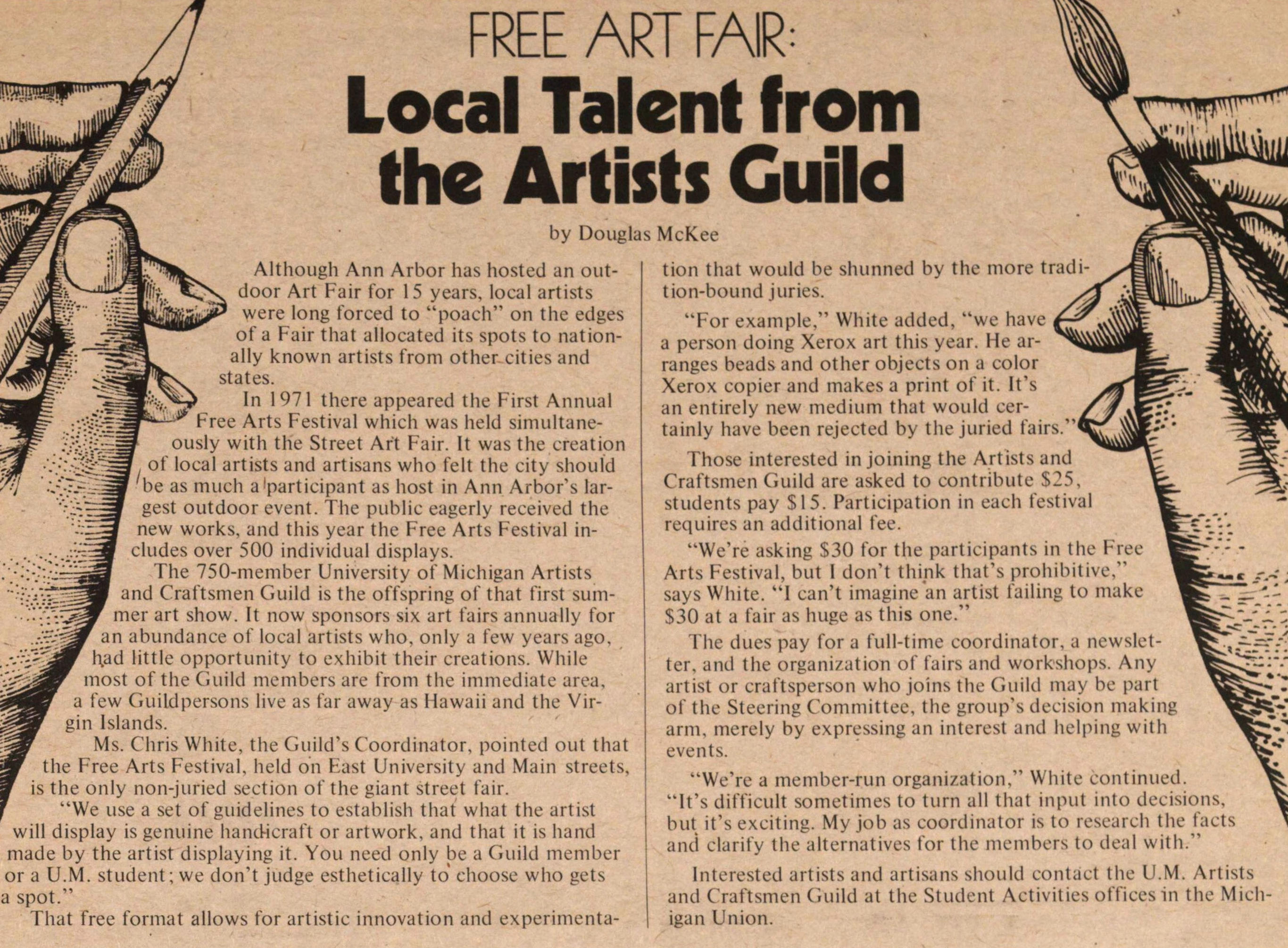 Although Ann Arbor has hosted an outdoor Art Fair for 15 years, local artists were long forced to "poach" on the edges of a Fair that allocated its spots to nationally known artists from other cities and states.

In 1971 there appeared the First Annual Free Arts Festival which was held simultaneously with the Street Art Fair. It was the creation of local artists and artisans who felt the city should be as much a participant as host in Ann Arbor's largest outdoor event. The public eagerly received the new works. and this year the Free Arts Festival includes over 500 individual displays.

The 750-member University of Michigan Artists and Craftsmen Guild is the offspring of that first summer art show. It now sponsors six art fairs annually for an abundance of local artists who, only a few years ago, had little opportunity to exhibit their creations. While most of the Guild members are from the immediate area, a few Guildpersons live as far away as Hawaii and the Virgin Islands.

Ms. Chris White, the Guild's Coordinator, pointed out that the Free Arts Festival, held on East University and Main streets, is the only non-juried section of the giant Street fair.

"We use a set of guidelines to establish that what the artist will display is genuine handicraft or artwork, and that it is hand made by the artist displaying it. You need only be a Guild member or a U.M. student; we don't judge esthetically to choose who gets a spot."

That free format allows for artistic innovation and experimentation that would be shunned by the more tradition-bound juries.

"For example," White added, "we have a person doing Xerox art this year. He arranges beads and other objects on a color Xerox copier and makes a print of it. It's an entirely new medium that would certainly have been rejected by the juried fairs."

Those interested in joining the Artists and Craftsmen Guild are asked to contribute $25, students pay $15. Participation in each festival requires an additional fee.

"We're asking $30 for the participants in the Free Arts Festival, but I don't think that’s prohibitive," says White. "I can't imagine an artist failing to make $30 at a fair as huge as this one."

The dues pay for a full-time coordinator, a newsletter, and the organization of fairs and workshops. Any artist or craftsperson who joins the Guild may be part of the Steering Committee, the group's decision making arm, merely by expressing an interest and helping with events.

"We're a member-run organization," White continued. "It's difficult sometimes to turn all that input into decisions, but it's exciting. My job as coordinator is to research the facts and clarify the alternatives tor the members to deal with." Interested artists and artisans should contact the U.M. Artists and Craftsmen Guild at the Student Activities offices in the Michigan Union.