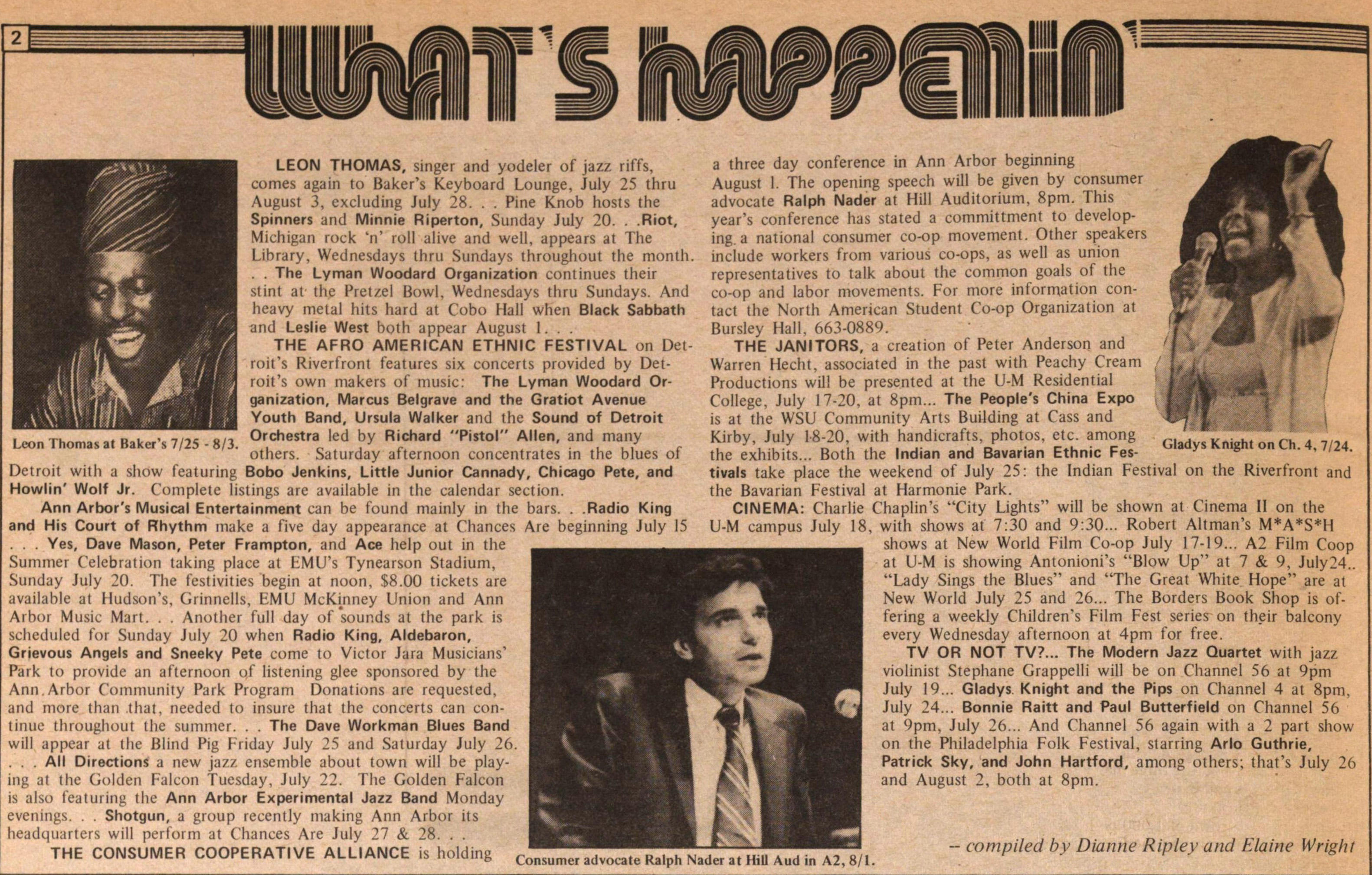 THE AFRO AMERICAN ETHNIC FESTIVAL on Detroit's Riverfront features six concerts provided by Detroit's own makers of music: The Lyman Woodard Organization, Marcus Belgrave and the Gratiot Avenue Youth Band, Ursula Walker and the Sound of Detroit Orchestra led by Richard "Pistol" Alien, and many others. Saturday afternoon concentrates in the blues of Detroit with a show featuring Bobo Jenkins, Little Junior Cannady, Chicago Pete, and Howlin' Wolf Jr. Complete listings are available in the calendar section.

Ann Arbor's Musical Entertainment can be found mainly in the bars. . .Radio King and His Court of Rhythm make a five day appearance at Chances Are beginning July 15 . . . Yes, Dave Mason, Peter Frampton, and Ace help out in the Summer Celebration taking place at EMU's Tynearson Stadium, Sunday July 20. The festivities begin at noon, $8.00 tickets are available at Hudson's, Grinnells, EMU McKinney Union and Ann Arbor Music Mart. . . Another full day of sounds at the park is scheduled for Sunday July 20 when Radio King, Aldebaron, Grievous Angels and Sneeky Pete come to Víctor Jara Musicians' Park to provide an afternoon of listening glee sponsored by the Ann Arbor Community Park Program. Donations are requested, and more than that, needed to insure that the concerts can continue throughout the summer. . . The Dave Workman Blues Band will appear at the Blind Pig Friday July 25 and Saturday July 26. ... All Directions a new jazz ensemble about town will be playing at the Golden Falcon Tuesday, July 22. The Golden Falcon is also featuring the Ann Arbor Experimental Jazz Band Monday evenings. . . Shotgun, a group recently making Ann Arbor its headquarters will perform at Chances Are July 27 & 28. . .

THE CONSUMER COOPERATIVE ALLIANCE is holding a three day conference in Ann Arbor beginning August 1. The opening speech will be given by consumer advocate Ralph Nader at Hill Auditorium, 8pm. This year's conference has stated a commitment to developing a national consumer co-op movement. Other speakers include workers from various co-ops, as well as union representatives to talk about the common goals of the co-op and labor movements. For more information contact the North American Student Co-op Organization at Bursley Hall, 663-0889.

THE JANITORS, a creation of Peter Anderson and Warren Hecht, associated in the past with Peachy Cream Productions will be presented at the U-M Residential College, July 17-20, at 8pm... The People's China Expo is at the WSU Community Arts Building at Cass and Kirby, July 18-20, with handicrafts, photos, etc. among the exhibits... Both the Indian and Bavarian Ethnic festivals take place the weekend of July 25: the Indian Festival on the Riverfront and the Bavarian Festival at Harmonie Park.

TV OR NOT TV?... The Modern Jazz Quartet with jazz violinist Stephane Grappelli will be on Channel 56 at 9pm July 19... Gladys Knight and the Pips on Channel 4 at 8pm. July 24... Bonnie Raitt and Paul Butterfield on Channel 56 at 9pm, July 26... And Channel 56 again with a 2 part show on the Philadelphia Folk Festival, starring Arlo Guthrie, Patrick Sky, and John Hartford, among others; that's July 26 and August 2, both at 8pm.

Consumer advocate Ralph Nader at Hill Aud in A2, 8/1.