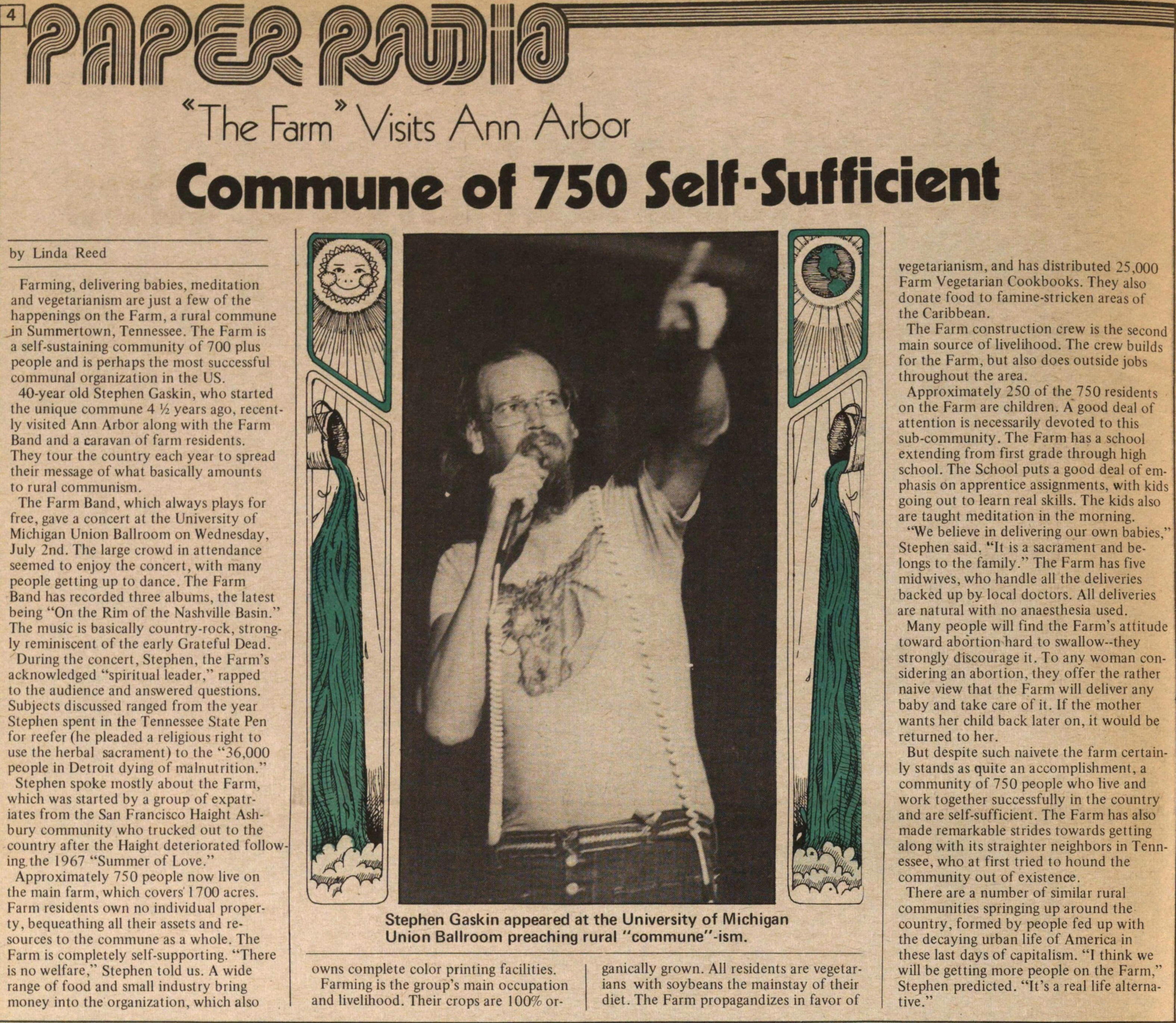 Farming, delivering babies, meditation and vegetarianism are just a few of the happenings on the Farm, a rural commune in Summertown, Tennessee. The Farm is a self-sustaining community of 700 plus people and is perhaps the most successful communal organization in the US.

40-year old Stephen Gaskin, who started the unique commune 4 1/2 years ago, recently visited Ann Arbor along with the Farm Band and a caravan of farm residents. They tour the country each year to spread their message of what basically amounts to rural communism.

The Farm Band, which always plays for free, gave a concert at the University of Michigan Union Ballroom on Wednesday, July 2nd. The large crowd in attendance seemed to enjoy the concert, with many people getting up to dance. The Farm Band has recorded three albums, the latest being "On the Rim of the Nashville Basin." The music is basically country-rock, strongly reminiscent of the early Grateful Dead. During the concert. Stephen, the Farm's acknowledged "spiritual leader," rapped to the audience and answered questions. Subjects discussed ranged from the year Stephen spent in the Tennessee State Pen for reefer (he pleaded a religious right to use the herbal sacrament) to the "36,000 people in Detroit dying of malnutrition." Stephen spoke mostly about the Farm, which was started by a group of expatriates from the San Francisco Haight Ashbury community who trucked out to the country after the Haight deteriorated following the 1967 "Slimmer of Love."

Approximately 750 people now live on the main farm, which covers 1 700 acres. Farm residents own no individual property, bequeathing all their assets and resources to the commune as a whole. The Farm is completely self-supporting. "There is no welfare," Stephen told us. A wide range of food and small industry bring money into the organization, which also owns complete color printing facilities. Farming is the group's main occupation and livelihood. Their crops are 100% ganically grown. All residents are vegetarians with soybeans the mainstay of their diet. The Farm propagandizes in favor of vegetarianism, and has distributed 25,000 Farm Vegetarian Cookbooks. They also donate food to famine-stricken areas of the Caribbean.

The Farm construction crew is the second main source of livelihood. The crew builds for the Farm, but also does outside jobs throughout the area.

Approximately 250 of the 750 residents on the Farm are children. A good deal of attention is necessarily devoted to this sub-community. The Farm has a school extending from first grade through high school. The School puts a good deal of emphasis on apprentice assignments, with kids going out to learn real skills. The kids also are taught meditation in the morning.

"We believe in delivering our own babies." Stephen said. "It is a sacrament and belongs to the family." The Farm has five midwives, who handle all the deliveries backed up by local doctors. All deliveries are natural with no anaesthesia used.

Many people will find the Farm's attitude toward abortion hard to swallow-they strongly discourage it. To any woman considering an abortion, they offer the rather naive view that the Farm will deliver any baby and take care of it. If the mother wants her child back later on, it would be returned to her.

But despite such naivete the farm certainly stands as quite an accomplishment, a community of 750 people who live and work together successfully in the country and are self-sufficient. The Farm has also made remarkable strides towards getting along with its straighter neighbors in Tennessee, who at first tried to hound the community out of existence.

There are a number of similar rural communities springing up around the country, formed by people fed up with the decaying urban life of America in these last daysof capitalism. "I think we will be getting more people on the Farm," Stephen predicted. "It's a real life alternative."