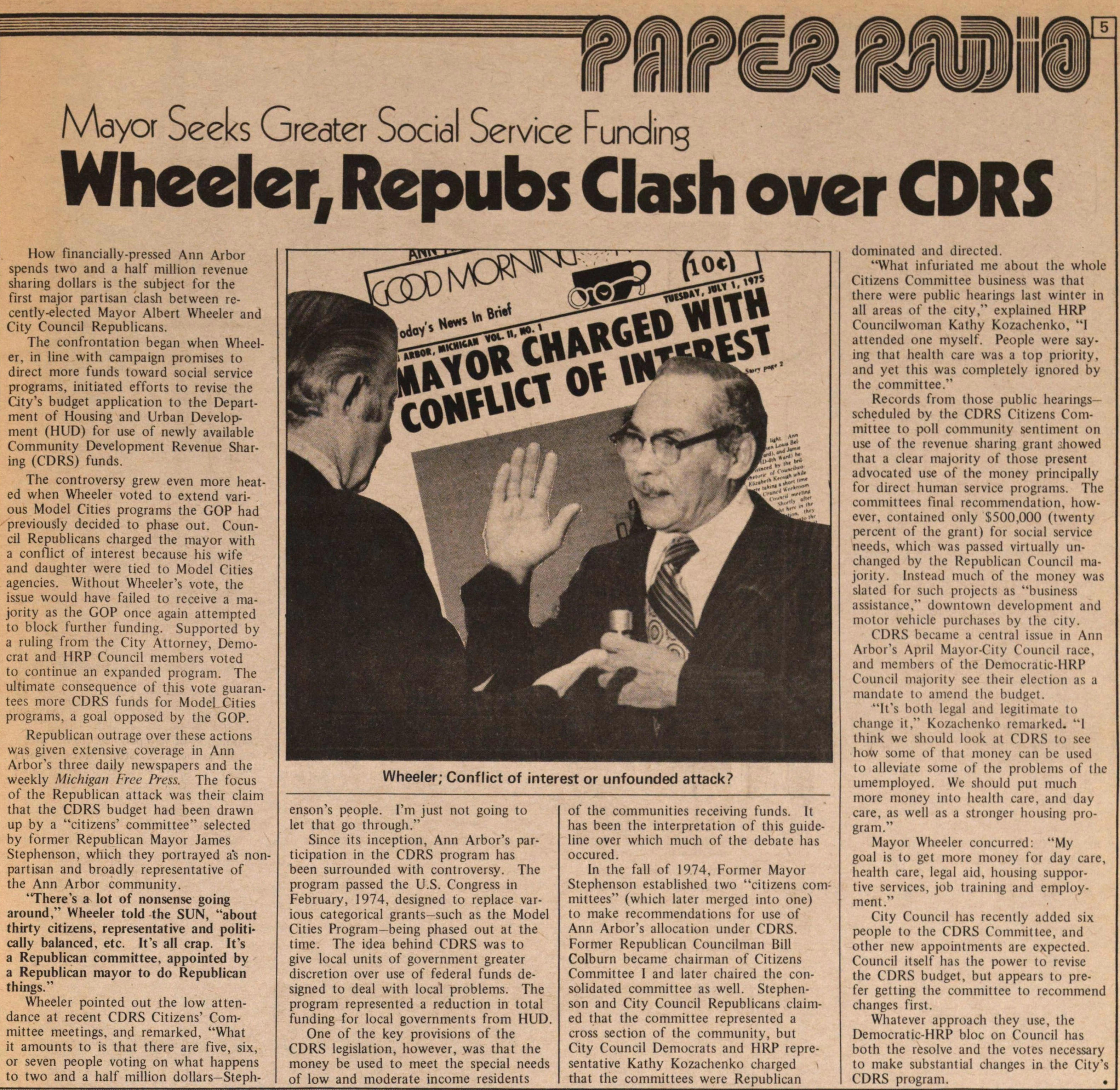 How financially-pressed Ann Arbor spends two and a half million revenue sharing dollars is the subject for the first major partisan clash between recently-elected Mayor Albert Wheeler and City Council Republicans.

The confrontation began when Wheeler, in line with campaign promises to direct more funds toward social service programs, initiated efforts to revise the City's budget application to the Department of Housing and Urban Development (HUD) for use of newly available Community Development Revenue Sharing (CDRS) funds.

The controversy grew even more heated when Wheeler voted to extend various Model Cities programs the GOP had previously decided to phase out. Council Republicans charged the mayor with a conflict of interest because his wife and daughter were tied to Model Cities agencies. Without Wheeler's vote, the issue would have failed to receive a majority as the GOP once again attempted to block further funding. Supported by a ruling from the City Attorney, Democrat and HRP Council members voted to continue an expanded program. The ultimate consequence of this vote guarantees more CDRS funds for Model Cities programs, a goal opposed by the GOP.

Republican outrage over these actions was given extensive coverage in Ann Arbor's three daily newspapers and the weekly Michigan Free Press. The focus of the Republican attack was their claim that the CDRS budget had been drawn up by a "citizens' committee" selected by farmer Republican Mayor James Stephenson, which they portrayed as nonpartisan and broadly representative of the Ann Arbor community.

"There's a lot of nonsense going around," Wheeler told the SUN, "about thirty citizens, representative and politically balanced, etc. It's all crap. It's a Republican committee, appointed by a Republican mayor to do Republican things."

Wheeler pointed out the low attendance at recent CDRS Citizens' Committee meetings, and remarked, "What it amounts to is that there are five, six, or seven people voting on what happens to two and a half million dollars- Stephenson's people. I'm just not going to let that go through."

Since its inception, Ann Arbor's participation in the CDRS program has been surrounded with controversy. The program passed the U.S. Congress in February, 1974, designed to replace various categorical grants- such as the Model Cities Program- being phased out at the time. The idea behind CDRS was to give local units of government greater discretion over use of federal funds designed to deal with local problems. The program represented a reduction in total funding for local governments from HUD.

One of the key provisions of the CDRS legislation, however, was that the money be used to meet the special needs of low and moderate income residents of the communities receiving funds. It has been the interpretation of this guideline over which much of the debate has occurred.

In the fall of 1974, Former Mayor Stephenson established two "citizens committees" (which later merged into one) to make recommendations for use of Ann Arbor's allocation under CDRS. Former Republican Councilman Bill Colburn became chairman of Citizens Committee I and later chaired the consolidated committee as well. Stephenson and City Council Republicans claimed that the committee represented a cross section of the community, but City Council Democrats and HRP representative Kathy Kozachenko charged that the committees were Republican dominated and directed.

"What infuriated me about the whole Citizens Committee business was that there were public hearings last winter in all areas of the city," explained HRP Councilwoman Kathy Kozachenko, "I attended one myself. People were saying that health care was a top priority, and yet this was completely ignored by the committee."

Records from those public hearings scheduled by the CDRS Citizens Committee to poll community sentiment on use of the revenue sharing grant showed that a clear majority of those present advocated use of the money principally for direct human service programs. The committees final recommendation, however, contained only $500,000 (twenty percent of the grant) for social service needs, which was passed virtually unchanged by the Republican Council majority. Instead much of the money was slated for such projects as "business assistance," downtown development and motor vehicle purchases by the city.

CDRS became a central issue in Ann Arbor's April Mayor-City Council race, and members of the Democratic-HRP Council majority see their election as a majority to amend the budget.

"It's both legal and legitimate to change it." Kozachenko remarked. "I think we should look at CDRS to see how some of that money can be used to alleviate some of the problems of the unemployed. We should put much more money into health care, and day care, as well as a stronger housing program."

City Council has recently added six people to the CDRS Committee, and other new appointments are expected. Council itself has the power to revise the CDRS budget, but appears to prefer getting the committee to recommend changes first.

Whatever approach they use, the Democratic-HRP bloc on Council has both the resolve and the votes necessary to make substantial changes in the City's CDRS program. .