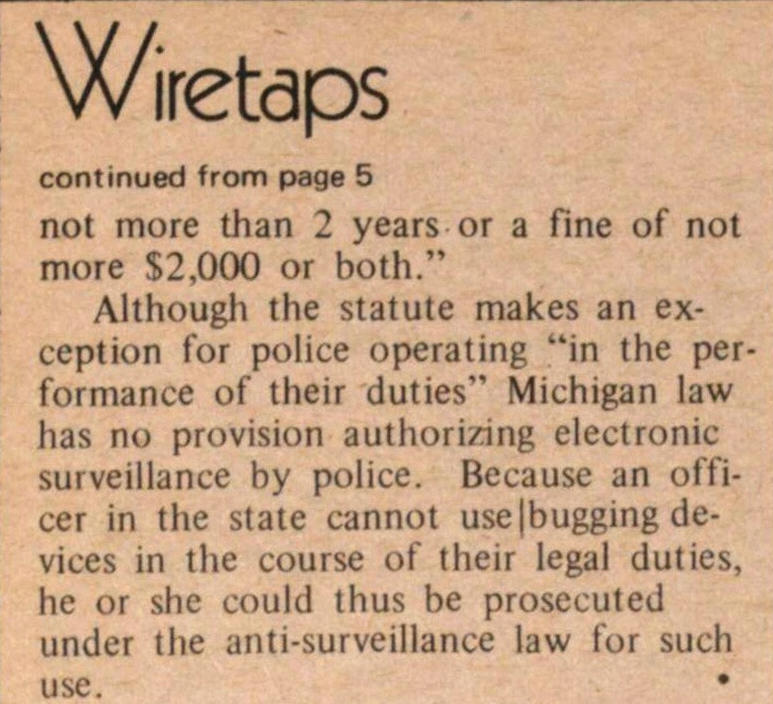 Michigan law enforcement agencies have been purchasing bugging and surveillance equipment over the past three years despite a state law specifically prohibiting their use.

According to information released by State Representative Perry Bullard (Dem. Ann Arbor), at least 13 bugging and wiretap devices were sold to Michigan police departments in 1973 and 1974. Use of such devices is prohibited by state law and carries penalties of up to two years imprisonment for violators.

"Because Michigan does not have a wiretap authorization statute," Bullard stated in a letter to Attorney General Frank Kelley, "I request that your department conduct an investigation into the purpose the (police) agencies had in buying the equipment and the use to which it has been put."

Bullard requested the probe following receipt of data from the National Commission for the Review of Federal and State Laws Relating to Wiretapping and Electronic Surveillance, showing that two electronics firms made sales of five separate devices to Michigan police agencies. The federal office did not release the names of the specific agencies invoived.

Among the devices purchased was the TX-755 Transmitter distributed by Audio Intelligence Devices, Inc. The transmitter is disguised as an ordinary wall electric outlet.

"You can even plug in an electrical appliance while the skillfully concealed amplified microphone and AC powered transmitter allow you to monitor every sound without interruption," according to the catalogue discription. Three of the transmitters were sold to police agencies in the state.

A second device, also available from Audio Intelligence Devices, is the TX-805 transmitter which replaces a telephone mouthpiece and which can work virtually forever by using regular telephone current rather than batteries. State law enforcement agencies bought three copies of the TX-805.

Other bugging accessories purchased by Michigan police departments included amplification equipment designed to strengthen signals transmitted by small, low-power bugging devices. Such signal amplifiers are placed within a short distance of a bug and strengthen the transmition so that it can be picked up by the eavesdropper at a greater distance.

"We now have evidence," representative Bullard concludes, "that there exists in Michigan sophisticated electronic surveillance equipment which very likely could be in use today in an unlawful invasion of the rights of Michigan citizens. It is a matter which warrants the immediate attention of the Attorney General."

The Michigan State Penal code contains the following provisions on use and possession of bugging devices:

"Any person who installs in any private place...any device for observing, photographing or eavesdropping upon the sounds or events of such place, or uses any such unauthorized installation,...(or) any person who manufactures, possesses or transfers to another any device...commonly used for eavesdroping...shall be guilty of a felony punishable by confinement in a state prison continued on page 18 Wiretaps continued f rom page 5 not more than 2 years or a fine of not more $2,000 or both."

Although the statute makes an exception for police operating "in the performance of their duties" Michigan law has no provision authorizing electronic surveillance by police. Because an officer in the state cannot use bugging devices in the course of their legal duties, he or she could thus be prosecuted under the anti-surveillance law for such use.