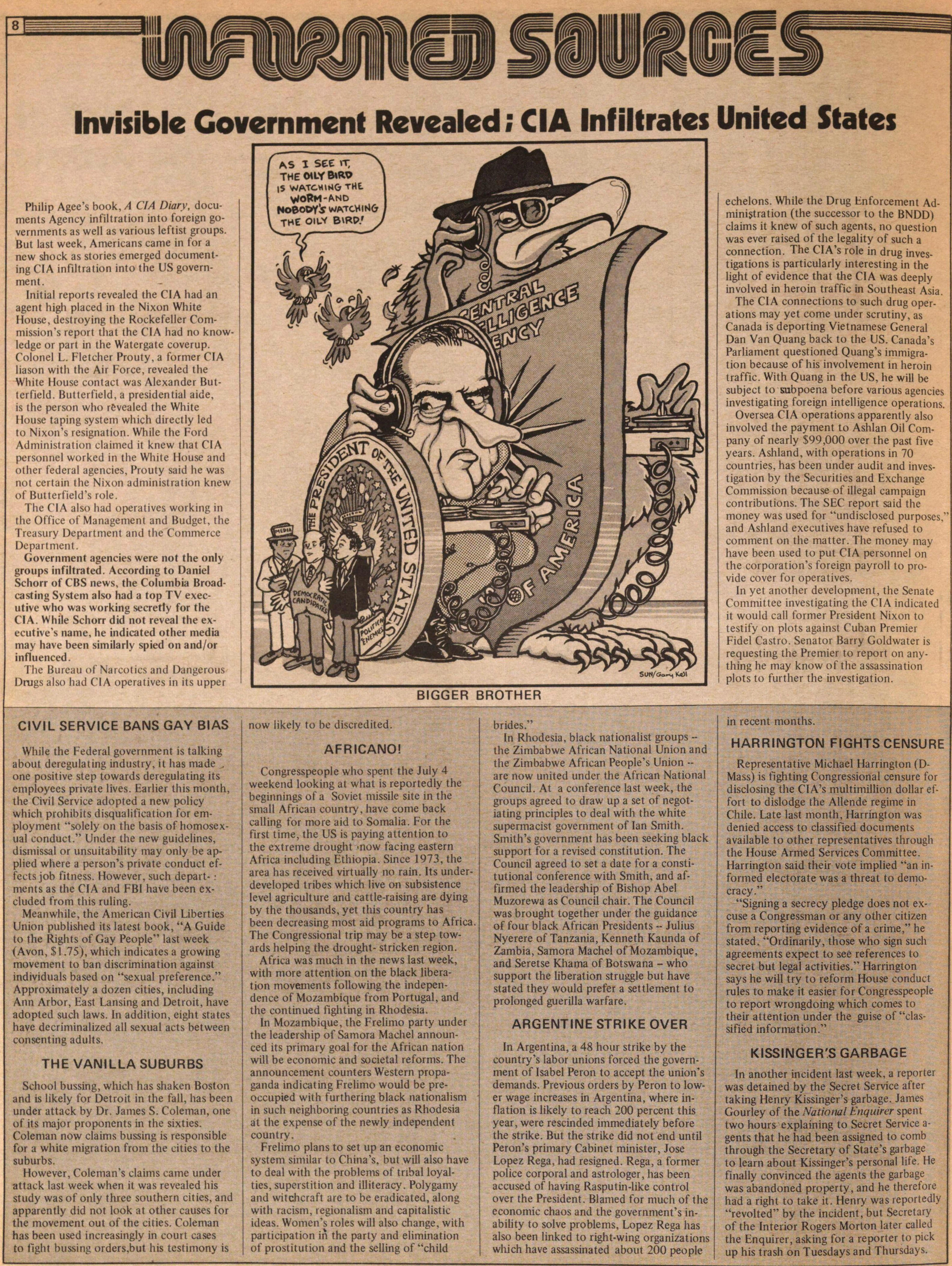 The CIA also had operatives working in the Office of Management and Budget, the Treasury Department and the Commerce Department.

Government agencies were not the only groups infiltrated. According to Daniel Schorr of CBS news, the Columbia Broadcasting System also had a top TV executive who was working secretly for the CIA. While Schorr did not reveal the executive's name, he indicated other media may have been similarly spied on and/or influenced.

The Bureau of Narcotics and Dangerous Drugs also had CIA operatives in its upper echelons. While the Drug Enforcement Administration (the successor to the BNDD) claims it knew of such agents, no question was ever raised of the legality of such a connection. The CIA's role in drug investigations is particularly interesting in the light of evidence that the CIA was deeply involved in heroin traffic in Southeast Asia.

The CIA connections to such drug operations may yet come under scrutiny, as Canada is deporting Vietnamese General Dan Van Quang back to the US. Canada's Parliament questioned Quang's immigration because of his involvement in heroin traffic. With Quang in the US, he will be subject to subpoena before various agencies investigating foreign intelligence operations.

Oversea CIA operations apparently also involved the payment to Ashlan Oil Company of nearly $99,000 over the past five years. Ashland, with operations in 70 countries, has been under audit and investigation by the Securities and Exchange Commission because of illegal campaign contributions. The SEC report said the money was used for "undisclosed purpose," and Ashland executives have refused to comment on the matter. The money may have been used to put CIA personnel on the corporation's foreign payroll to provide cover for operatives.

In yet another development, the Senate Committee investigating the CIA indicated it would call former President Nixon to testify on plots against Cuban Premier Fidel Castro. Senator Barry Goldwater is requesting the Premier to report on anything he may know of the assassination plots to further the investigation.

While the Federal government is talking about deregulating industry, it has made one positive step towards deregulating its employees private lives. Earlier this month, the Civil Service adopted a new policy which prohibits disqualification for employment "solely on the basis of homosexual conduct." Under the new guidelines, dismissal or unsuitability may only be applied where a person's private conduct effects job fitness. However, such departments as the CIA and FBI have been excluded from this ruling.

Meanwhile, the American Civil Liberties Union published its Iatest book, "A Guide to the Rights of Gay People" last week (Avon, $1.75), which indicates a growing movement to ban discrimination against individuals based on "sexual preference." Approximately a dozen cities, including Ann Arbor, East Lansing and Detroit, have adopted such laws. In addition, eight states have decriminalized all sexual acts between consenting adults.

School bussing, which has shaken Boston and is likely for Detroit in the fall, has been under attack by Dr. James S. Coleman, one of its major proponents in the sixties. Coleman now claims bussing is responsible for a white migration from the cities to the suburbs.

However, Coleman's claims came under attack last week when it was revealed his study was of only three southern cities, and apparently did not look at other causes for the movement out of the cities. Coleman has been used increasingly in court cases to fight bussing orders, but his testimony is now likely to be discredited.

Congresspeople who spent the July 4 weekend looking at what is reportedly the beginnings of a Soviet missile site in the small African country, have come back calling for more aid to Somalia. For the first time, the US is paying attention to the extreme drought now facing eastern Africa including Ethiopia. Since 1973, the area has received virtually no rain. lts underdeveloped tribes which live on subsistence level agriculture and cattle-raising are dying by the thousands, yet this country has been decreasing most aid programs to África. The Congressional trip may be a step towards helping the stricken region.

Africa was much in the news last week, with more attention on the black liberation movements following the independence of Mozambique from Portugal, and the continued fighting in Rhodesia.

In Mozambique, the Frelimo party under the leadership of Samora Machel announced its primary goal for the African nation will be economic and societal reforms. The announcement counters Western propaganda indicating Frelimo would be preoccupied with furthering black nationalism in such neighboring countries as Rhodesia at the expense of the newly independent country.

Frelimo plans to set up an economic system similar to China', but will also have to deal with the problems of tribal loyalties, superstition and illiteracy. Polygamy and witchcraft are to be eradicated, along with racism, regionalism and capitalistic ideas. Women's roles will also change, with participation in the party and elimination of prostitution and the selling of "child brides."

In Rhodesia, black nationalist groups-the Zimbabwe African National Union and the Zimbabwe African People's Union- are now united under the African National Council. At a conference last week, the groups agreed to draw up a set of negotiating principles to deal with the white supermacist government of lan Smith. Smith's government has been seeking black support for a revised constitution. The Council agreed to set a date for a constitutional conference with Smith, and affirmed the leadership of Bishop Abel Muzorewa as Council chair. The Council was brought together under the guidance of four black African Presidents-Julius Nyerere of Tanzania, Kenneth Kaunda of Zambia, Samora Machel of Mozambique, and Seretse Khama of Botswana-who support the liberation struggle but have stated they would prefer a settlement to prolonged guerilla warfare.

In Argentina, a 48 hour strike by the country's labor unions forced the government of Isabel Peron to accept the union's demands. Previous orders by Peron to lower wage increases in Argentina, where infla tion is likely to reach 200 percent this year, were rescinded immediately before the strike. But the strike did not end until Peron's primary Cabinet minister, Jose Lopez Rega, had resigned. Rega, a former police corporal and astrologer, has been accused of having Rasputin-like control over the President. Blamed for much of the economic chaos and the government's inability to solve problems, Lopez Rega has also been linked to right-wing organizations which have assassinated about 200 people in recent months.

Representative Michael Harrington (D-Mass) is fighting Congressional censure for disclosing the CIA's multimillion dollar effort to dislodge the Allende regime in Chile. Late last month, Harrington was denied access to classified documents available to other representatives through the House Armed Services Committee. Harrington said their vote implied "an informed electorate was a threat to democracy."

"Signing a secrecy pledge does not excuse a Congressman or any other citizen from reporting evidence of a crime," he stated. "Ordinarily, those who sign such agreements expect to see references to secret but legal activities." Harrington says he will try to reform House conduct rules to make it easier for Congresspeople to report wrongdoing which comes to their attention under the guise of "classified information."

In another incident last week, a reporter was detained by the Secret Service after taking Henry Kissinger's garbage. James Gourley of the National Enquirer spent two hours explaining to Secret Service agents that he had been assigned to comb through the Secretary of State's garbage to learn about Kissinger's personal life. He finally convinced the agents the garbage was abandoned property, and he therefore had a right to take it. Henry was reportedly "revolted" by the incident, but Secretary of the Interior Rogers Morton later called the Enquirer, asking for a reporter to pick up his trash on Tuesdays and Thursdays.