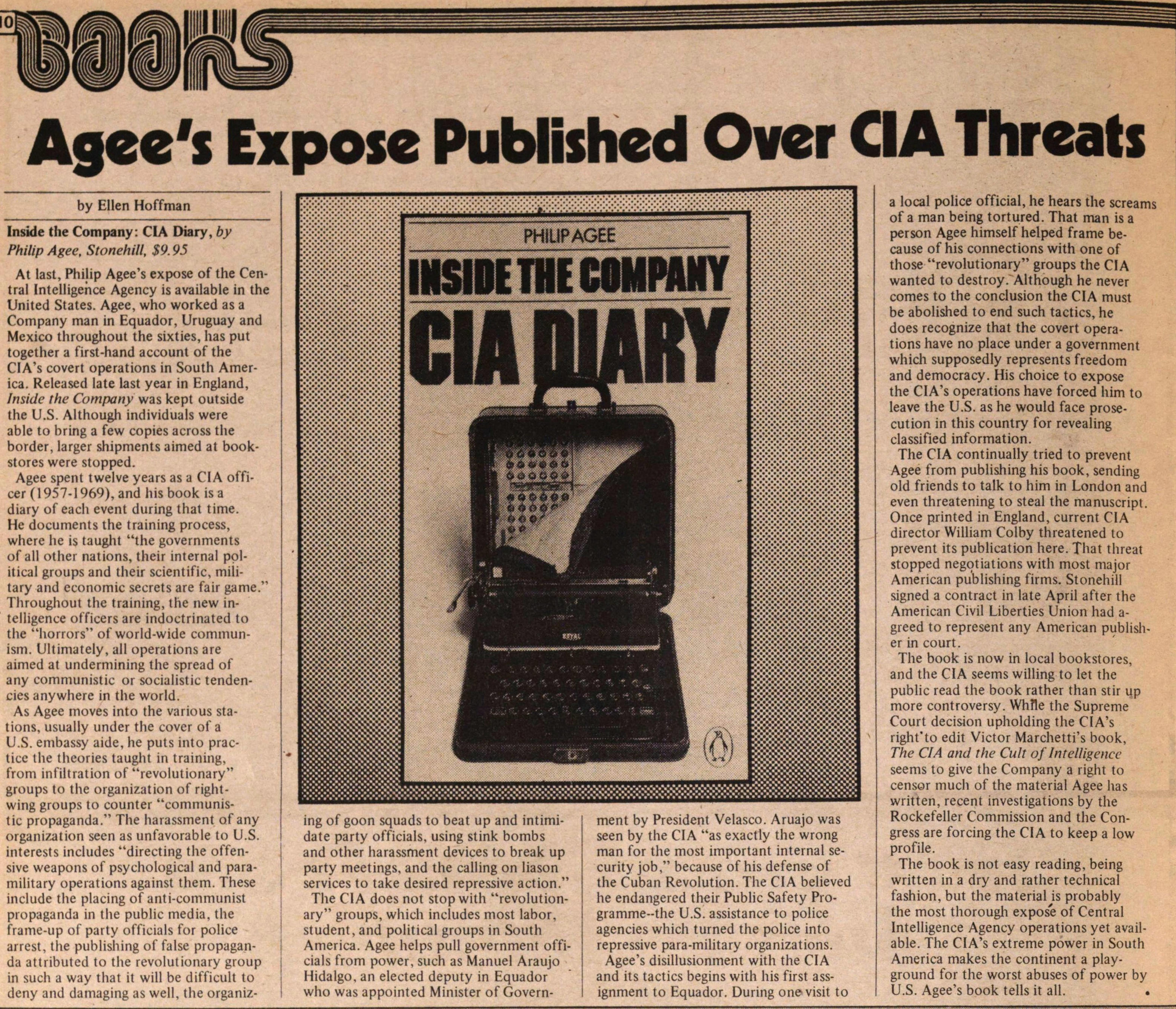 Inside the Company: CIA Diary, by Philip Agee, Stonehill, $9.95

At last, Philip Agee's expose of the Central Intelligence Agency is available in the United States. Agee, who worked as a Company man in Equador, Uruguay and Mexico throughout the sixties, has put together a first-hand account of the CIA's covert operations in South America. Released late last year in England, Inside the Company was kept outside the U.S. Although individuals were able to bring a few copies across the border, larger shipments aimed at bookstores were stopped.

Agee spent twelve years as a CIA officer (1957-1969), and his book is a diary of each event during that time. He documents the training process, where he is taught "the governments of all other nations, their internal political groups and their scientific, military and economic secrets are fair game." Throughout the training, the new intelligence officers are indoctrinated to the "horrors" of world-wide communism. Ultimately, all operations are aimed at undermining the spread of any communistic or socialistic tendencies any where in the world.

As Agee moves into the various stations, usually under the cover of a U.S. embassy aide, he puts into practicc the theories taught in training, from infiltration of "revolutionary" groups to the organization of rightwing groups to counter "communistic propaganda." The harassment of any organization seen as unfavorable to U.S. interests includes "directing the offensive weapons of psychological and paramilitary operations against them. These include the placing of anti-communist propaganda in the public media, the frame-up of party officials for police arrest, the publishing of false propaganda attributed to the revolutionary group in such a way that it will be difficult to deny and damaging as well, the organizing of goon squads to beat up and intimidate party officials, using stink bombs and other harassment devices to break up party meetings, and the calling on liason services to take desired repressive action."

The CIA does not stop with "revolutionary" groups, which includes most labor, student, and political groups in South America. Agee helps pull government officials from power, such as Manuel Araujo Hidalgo, an elected deputy in Equador who was appointed Minister of ment by President Velasco. Aruajo was seen by the CIA "as exactly the wrong man for the most important internal security job," because of his defense of the Cuban Revolution. The CIA believed he endangered their Public Safety Programme-the U.S. assistance to police agencies which turned the police into repressive para-military organizations.

Agee's disillusionment with the CIA and its tactics begins with his first assignment to Equador. During one visit to a local police official, he hears the screams of a man being tortured. That man is a person Agee himself helped frame because of his connections with one of those "revolutionary" groups the CIA wanted to destroy. Although he never comes to the conclusion the CIA must be abolished to end such tactics, he does recognize that the covert operations have no place under a government which supposedly represents freedom and democracy. His choice to expose the CIA's operations have forced him to leave the U.S. as he would face prosecution in this country for revealing classified information.

The CIA continually tried to prevent Agee from publishing his book, sending old friends to talk to him in London and even threatening to steal the manuscript. Once printed in England, current CIA director William Colby threatened to prevent its publication here. That threat stopped negotiations with most major American publishing firms. Stonehill signed a contract in late April after the American Civil Liberties Union had agreed to represent any American publisher in court.

The book is now in local bookstores, and the CIA seems willing to let the public read the book rather than stir up more controversy. While the Supreme Court decision upholding the CIA's right to edit Victor Marchetti's book, The CIA and the Cult of Intelligence seems to give the Company a right to censor much of the material Agee has written, recent investigations by the Rockefeller Commission and the Congress are forcing the CIA to keep a low profile.

The book is not easy reading, being written in a dry and rather technical fashion, but the material is probably the most thorough expose of Central Intelligence Agency operations yet available. The CIA's extreme power in South America makes the continent a playground for the worst abuses of power by U.S. Agee's book tells it all.