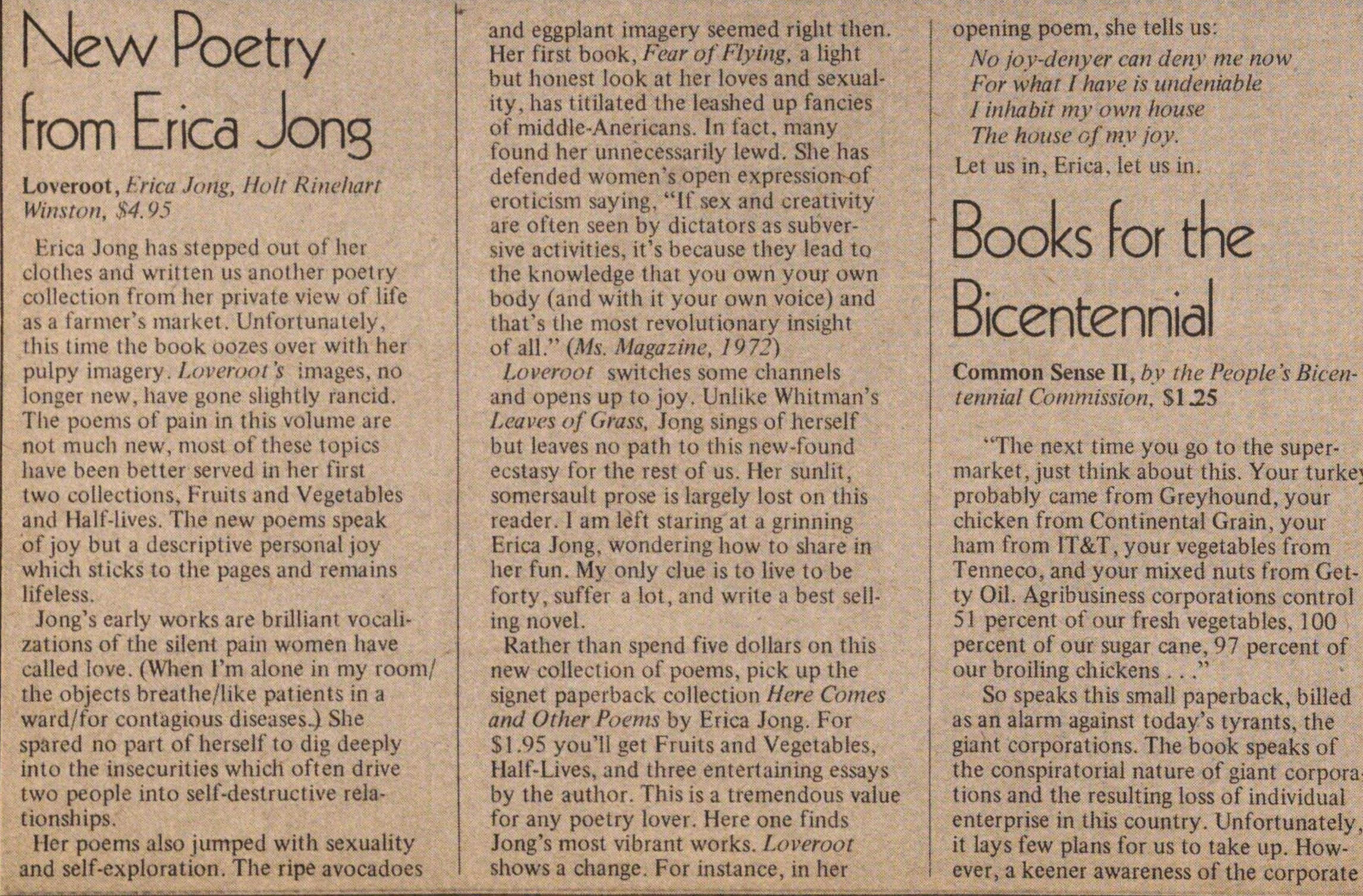 Erica Jong has stepped out of her clothes and written us another poetry collection from her private view of life as a farmer's market. Unfortunately, this time the book oozes over with her pulpy imagery. Loveroot's images, no longer new, have gone slightly rancid. The poems of pain in this volume are not much new, most of these topics have been better served in her first two collections, Fruits and Vegetables and Half-lives. The new poems speak of joy but a descriptive personal joy which sticks to the pages and remains lifeless.

Jong's early works are brilliant vocalizations of the silent pain women have called love. (When l'm alone in my room the objects breathe like patients in a ward for contagious diseases). She spared no part of herself to dig deeply into the insecurities which often drive two people into self-destructive relationships.

Her poems also jumped with sexuality and self-exploration. The ripe avocadoes and eggplant imagery seemed right then. Her first book, Fear of Flying, a light but honest look at her loves and sexuality, has titillated the leashed up fancies of middle-Americans. In fact, many found her unnecessarily lewd. She has defended women's open expression of eroticism saying, "If sex and creativity are often seen by dictators as subversive activities, it's because they lead to the knowledge that you own your own body (and with it your own voice) and that's the most revolutionary insight of all." (Ms. Magazine, 1972)

Loveroot switches some channels and opens up to joy. Unlike Whitman's Leaves of Grass, Jong sings of herself but leaves no path to this new-found ecstasy for the rest of us. Her sunlit, somersault prose is largely lost on this reader. I am left staring at a grinning Erica Jong, wondering how to share in her fun. My only clue is to live to be forty, suffer a lot, and write a best selling novel.

Rather than spend five dollars on this new collection of poems, pick up the signet paperback collection Here Comes and Other Poems by Erica Jong. For $1.95 you'll get Fruits and Vegetables, Half-Lives, and three entertaining essays by the author. This is a tremendous value for any poetry lover. Here one finds Jong's most vibrant works. Loveroot shows a change. For instance, in her opening poem, she tells us:

No joy-denyer can deny me now
For what l have is undeniable
I inhabit my own house
The house of my joy.