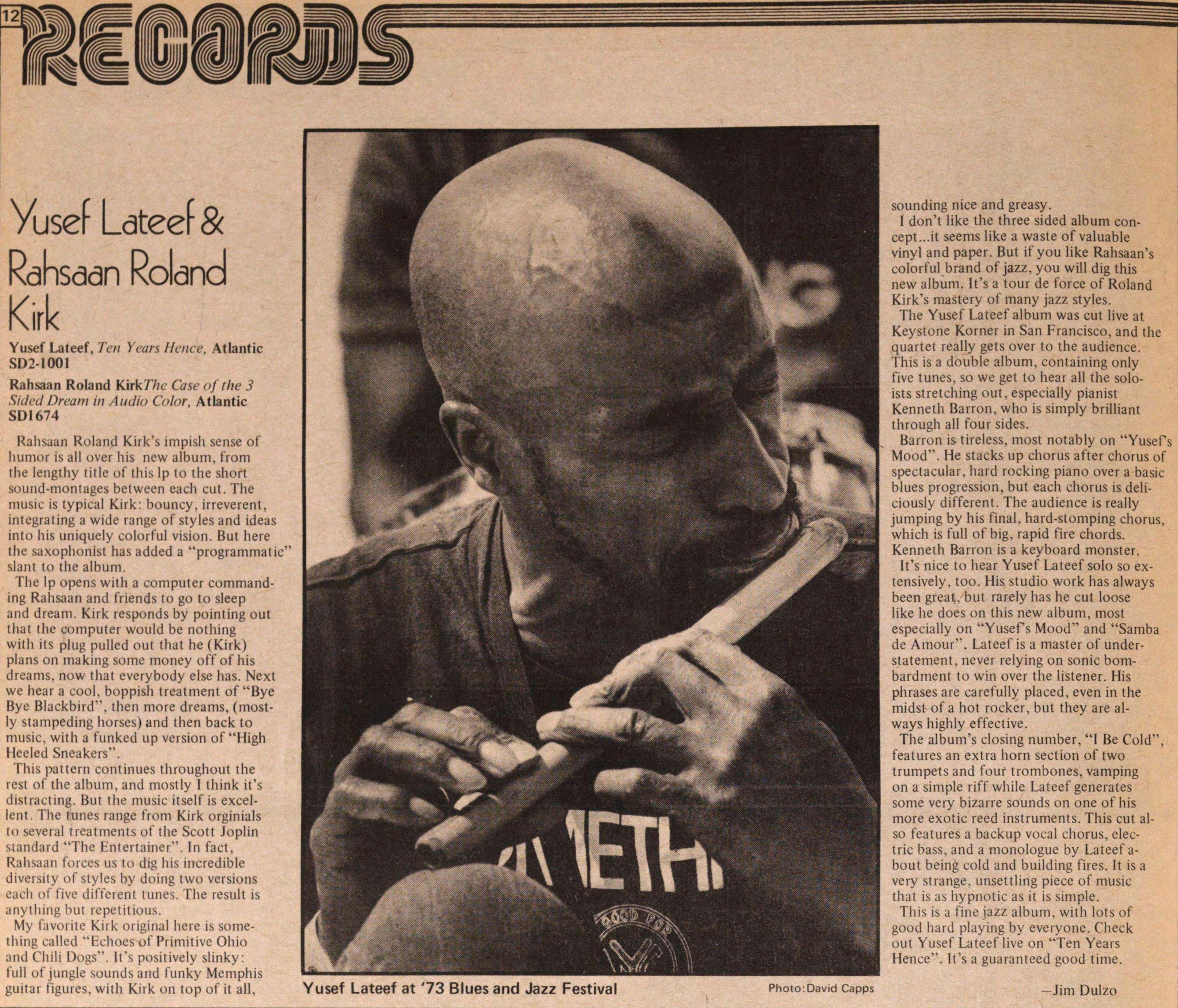 Rahsaan Roland Kirk's impish sense of humor is all over his new album, from the lengthy title of this lp to the short sound-montages between each cut. The music is typical Kirk: bouncy, irreverent, integrating a wide range of styles and ideas into his uniquely colorful vision. But here the saxophonist has added a "programmatic" slant to the album.

The lp opens with a computer commanding Rahsaan and friends to go to sleep and dream. Kirk responds by pointing out that the computer would be nothing with its plug pulled out that he (Kirk) plans on making some money off of his dreams, now that everybody else has. Next we hear a cool, boppish treatment of "Bye Bye Blackbird", then more dreams, (mostly stampeding horses) and then back to music, with a funked up version of "High Heeled Sneakers".

This pattern continues throughout the rest of the album, and mostly I think it's distracting. But the music itself is excellent. The tunes range from Kirk originals to several treatments of the Scott Joplin standard "The Entertainer". In fact, Rahsaan forces us to dig his incredible diversity of styles by doing two versions each of five different tunes. The result is anything but repetitious.

My favorite Kirk original here is something called "Echoes of Primitive Ohio and Chili Dogs". It's positively slinky: full of jungle sounds and funky Memphis guitar figures, with Kirk on top of it all. sounding nice and greasy.

I don't like the three sided album concept. ..it seems like a waste of valuable vinyl and paper. But if you like Rahsaan's colorful brand of jazz, you will dig this new album. It's a tour de force of Roland Kirk's mastery of many jazz styles.

The Yusef Lateef album was cut live at Keystone Korner in San Francisco, and the quartet really gets over to the audience. This is a double album, containing only five tunes, so we get to hear all the soloists stretching out, especially pianist Kenneth Barron, who is simply brilliant through all four sides.

Barron is tireless, most notably on "Yusef's Mood". He stacks up chorus after chorus of spectacular, hard rocking piano over a basic blues progression, but each chorus is deliciously different. The audience is really jumping by his final, hard-stomping chorus, which is full of big, rapid fire chords. Kenneth Barron is a keyboard monster.

It's nice to hear Yusef Lateef solo so extensively, too. His studio work has always been great. but rarely has he cut loose like he does on this new album, most especially on "Yusef's Mood" and "Samba de Amour". Lateef is a master of understatement, never relying on sonic bombardment to win over the listener. His phrases are carefully placed, even in the midst of a hot rocker, but they are always highly effective.

The album's closing number, "I Be Cold", features an extra horn section of two trumpets and four trombones, vamping on a simple riff while Lateef generates some very bizarre sounds on one of his more exotic reed instruments. This cut also features a backup vocal chorus, electric bass, and a monologue by Lateef about being cold and building fires. It is a very strange. unsettling piece of music that is as hypnotic as it is simple.

This is a fine jazz album, with lots of good hard playing by everyone. Check out Yusef Lateef live on "Ten Years Hence". It's a guaranteed good time.