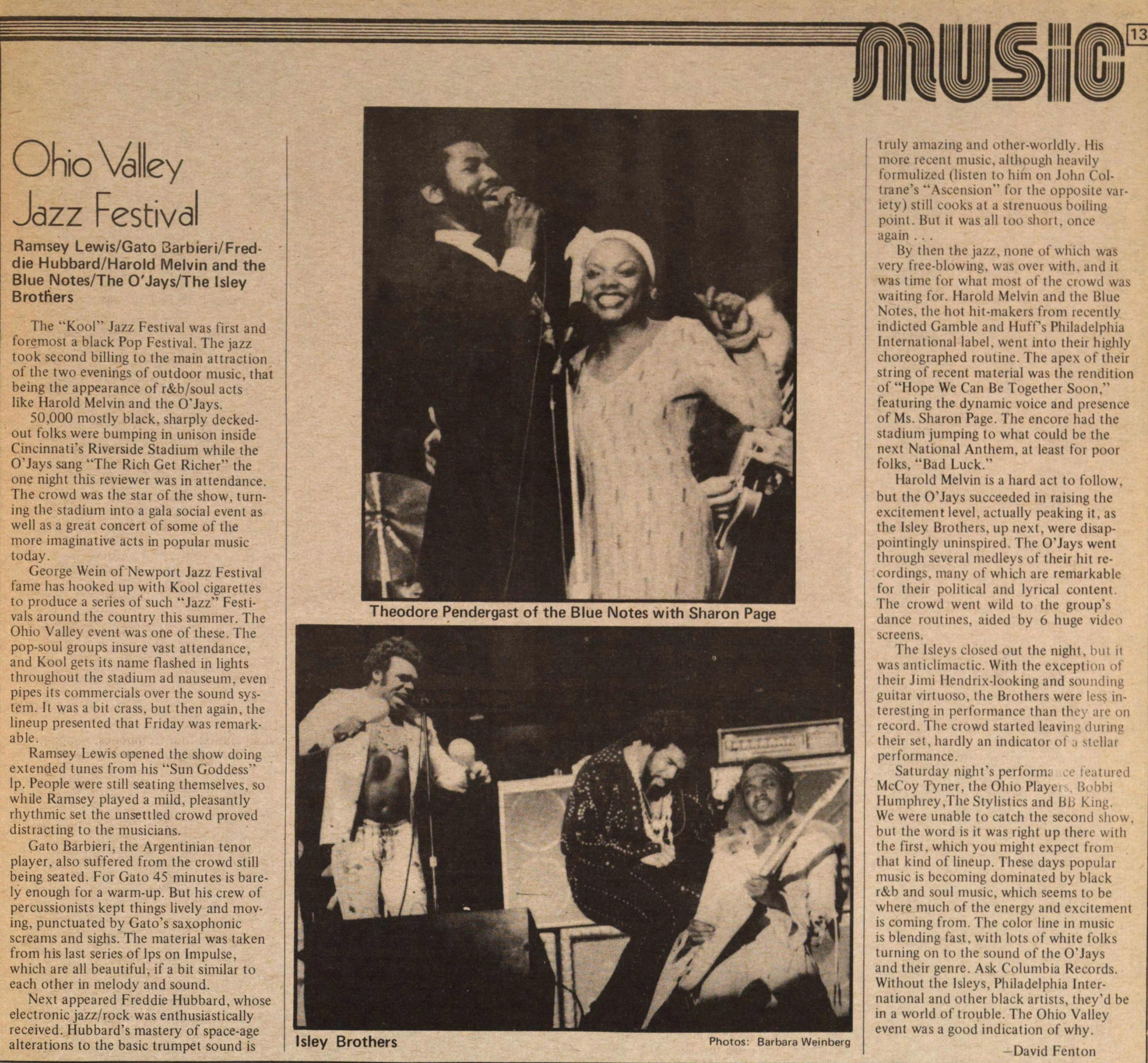 The "Kool" Jazz Festival was first and foremost a black Pop Festival. The jazz took second billing to the main attraction of the two evenings of outdoor music, that being the appearance of r&b/soul acts like Harold Melvin and the O'Jays.

50,000 mostly black, sharply decked-out folks were bumping in unison inside Cincinnati's Riverside Stadium while the O'Jays sang "The Rich Get Richer" the one night this reviewer was in attendance. The crowd was the star of the show, turning the stadium into a gala social event as well as a great concert of some of the more imaginative acts in popular music today.

George Wein of Newport Jazz Festival fame has hooked up with Kool cigarettes to produce a series of such "Jazz" Festivals around the country this summer. The Ohio Valley event was one of these. The pop-soul groups insure vast attendance, and Kool gets its name flashed in lights throughout the stadium ad nauseum. even pipes its commercials over the sound system. It was a bit crass, but then again, the lineup presented that Friday was remarkable.

Ramsey Lewis opened the show doing extended tunes from his "Sun Goddess" lp. People were still seating themselves, so while Ramsey played a mild. pleasantly rhythmic set the unsettled crowd proved distracting to the musicians.

Gato Barbieri, the Argentinian tenor player, also suffered from the crowd still being seated. For Gato 45 minutes is barely enough for a warm-up. But his crew of percussionists kept things lively and moving, punctuated by Gato's saxophonic screams and sighs. The material was taken from his last series of lps on Impulse, which are all beautiful, if a bit similar to each other in melody and sound.

Next appeared Freddie Hubbard, whose electronic jazz/rock was enthusiastically received. Hubbard's mastery of space-age alterations to the basic trumpet sound is truly amazing and other-worldly. His more recent music, although heavily formulized (listen to him on John Coltrane's "Ascension" for the opposite variety) still cooks at a strenuous boiling point. But it was all too short, once again . . .

By then the jazz, none of which was very free-blowing, was over with, and it was time for what most of the crowd was waiting for. Harold Melvin and the Blue Notes, the hot hit-makers from recently indicted Gamble and Huffs Philadelphia International label, went into their highly choreographed routine. The apex of their string of recent material was the rendition of "Hope We Can Be Together Soon," featuring the dynamic voice and presence of Ms. Sharon Page. The encore had the stadium jumping to what could be the next National Anthem. at least tor poor folks, "Bad Luck."

Harold Melvin is a hard act to follow, hut the O'Jays succeeded in raising the excitement level. actually peaking it, as the Isley Brothers, up next, were disappointingly uninspired. The O'Jays went through several medleys of their hit recordings, many of which are remarkable for their political and lyrical content. The crowd went wild to the group's dance routines, aided by 6 huge video screens.

The Isleys closed out the night, but it was anticlimactic. With the exception of their Jimi Hendrix-looking and sounding guitar virtuoso, the Brothers were less interesting in performance than they are on record. The crowd started leaving during their set, hardly an indicator of a stellar performance.

Saturday night's performance featured McCoy Tyner, the Ohio Players, Bobbi Humphrey, The Stylistics and BB King. We were unable to catch the second show. but the word is it was right up there with the first, which you might expect from that kind of lineup. These days popular music is becoming dominated by black r&b and soul music, which seems to be where much of the energy and excitement is coming from. The color line in music is blending fast, with lots of white folks turning on to the sound of the O'Jays and their genre. Ask Columbia Records. Without the Isleys, Philadelphia International and other black artists, they'd be in a world of trouble. The Ohio Valley event was a good indication of why.