R&B and Jazz from Columbia Records 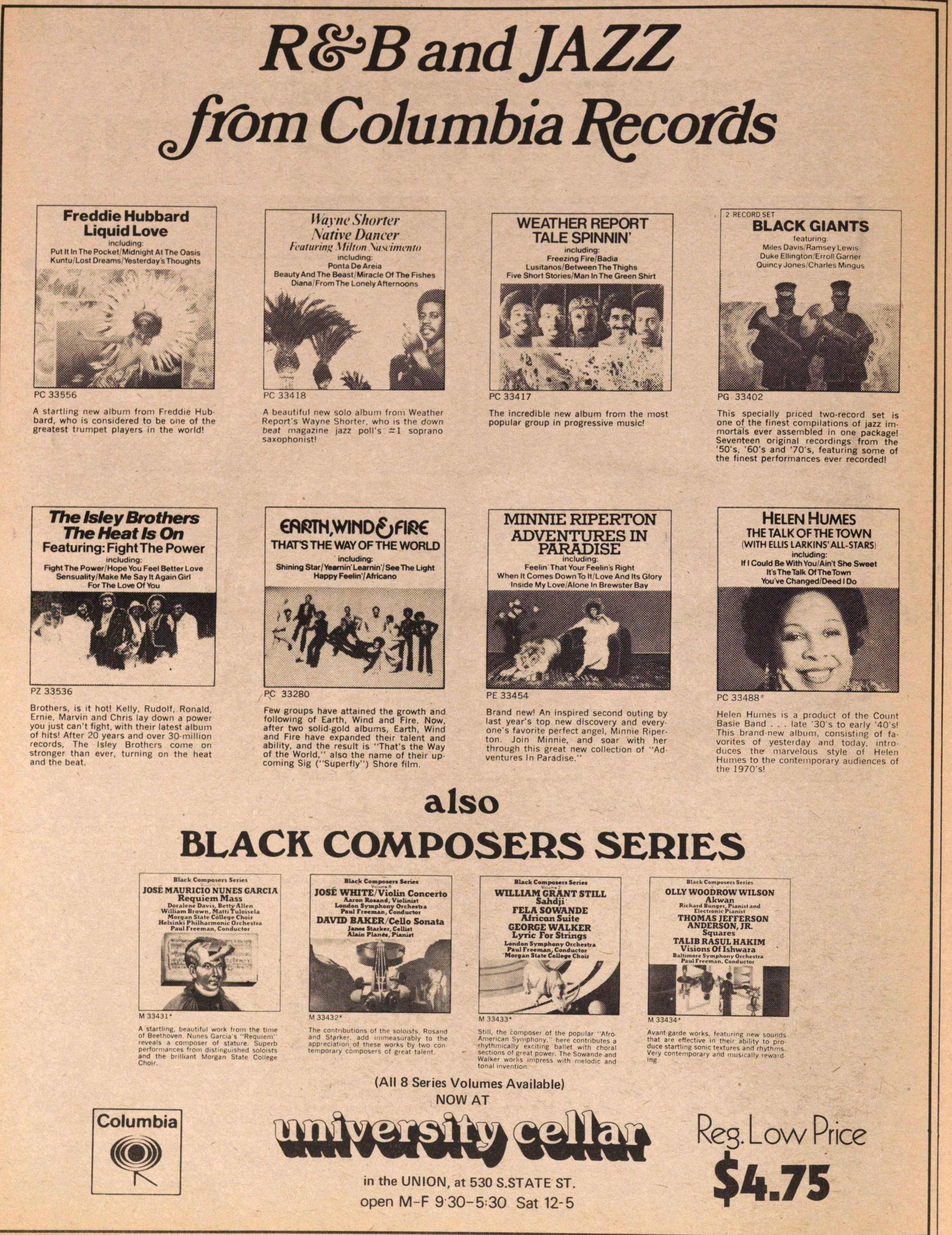 including: Put It In The Pocket / Midnight At the Oasis / Kuntu / Lost Dreams / Yesterday's Thoughts

A startling new album from Freddie Hubbard, who is considered to be one of the greatest trumpet players in the world!

including: Ponta De Areia / Beauty and the Beast / Miracle Of The Fishes / Diana / From the Lonely Afternoons

A beautiful new solo album from Weather Report's Wayne Shorter, who is the down beat magazine jazz poll's #1 soprano saxophonist!

including: Freezing Fire / Badia / Lusitanos / Between the Thighs / Five Short Stories / Man In The Green Shirt

The incredible new album from the most popular group in progressive music!

This specially priced two-record set is one of the finest compilations of jazz immortals ever assembled in one package! Seventeen original recordings from the '50's, '60's and '70's, featuring some of the finest performances ever recorded!

The Heat Is On

including: Fight the Power / Hope You Feel Better Love / Sensuality / Make Me Say It Again Girl / For the Love of You

Brothers, is it hot! Kelly, Rudolf, Ronald, Ernie, Marvin and Chris lay down a power you just can't fight, with their latest album of hits! After 20 years and over 30-million records, The Isley Brothers come on stronger than ever, turning on the heat and the beat.

That's The Way Of The World

Few groups have attained the growth and following of Earth, Wind and Fire. Now, after two solid-gold albums, Earth, Wind and Fire have expanded their talent and ability, and the result is "That's the Way of the World," also the name of their upcoming Sig ("Superfly") Shore Film.

including: Feelin' That Your Feelin's Right / When It Comes Down To It / Love And Its Glory / Inside My Love / Alone in Brewster Bay

The contributions of the soloists, Rosand and Starker, add immeasurable to the appreciation of these works by two contemporary composers of great talent.

Still, the composer of the popular "Afro-American Symphony," here contributes a rhythmically exciting ballet with choral sections of great power. The Sowande and Walker works impress with melodic and tonal invention.

Avant-garde works, featuring new sounds that are effective in their ability to produce startling sonic textures and rhythms. Very contemporary and musically rewarding.

(All 8 Series Volumes Available) Now at