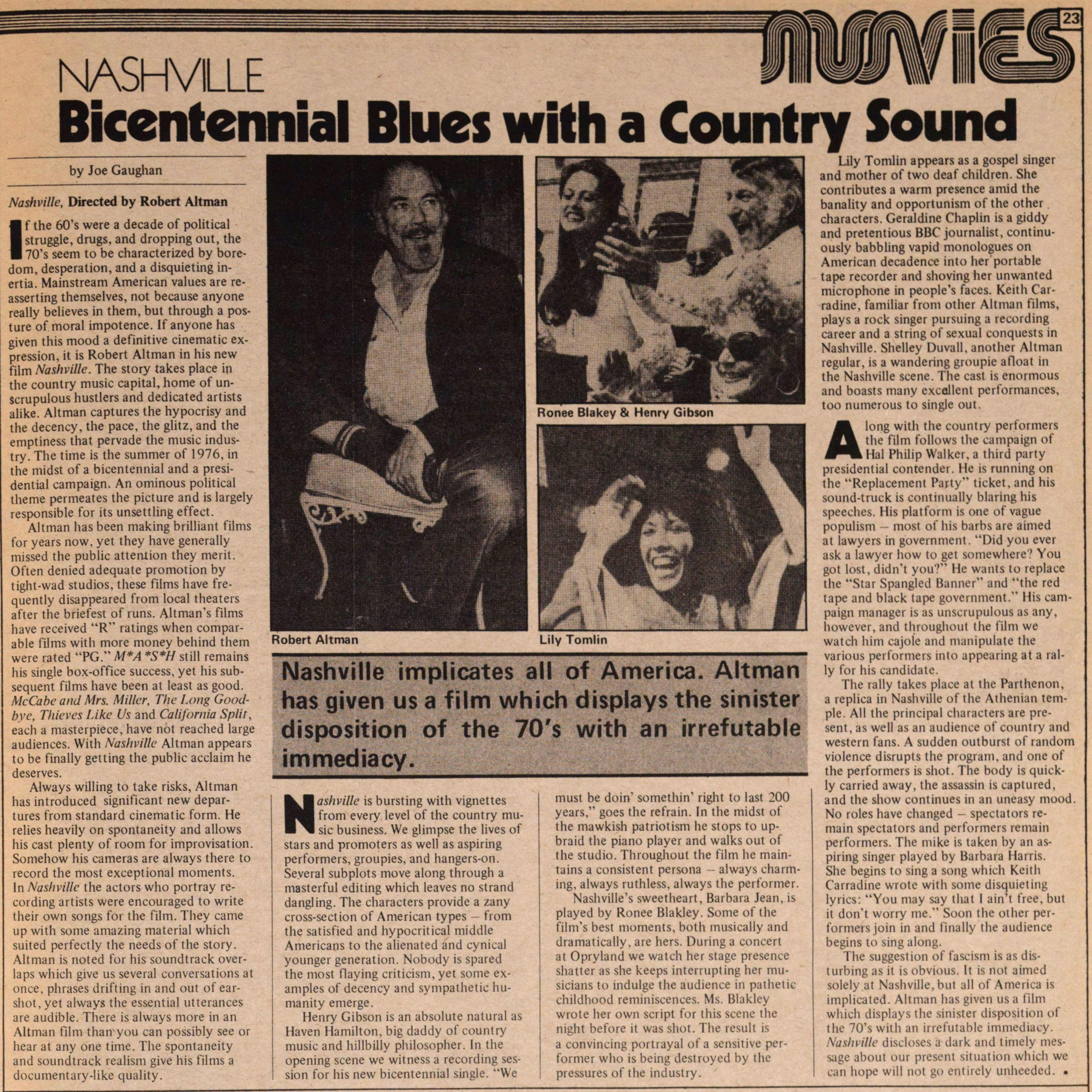 Bicentennial Blues with a Country Sound

If the 60's were a decade of political struggle, drugs, and dropping out, the 70's seem to be characterized by boredom, desperation, and a disquieting inertia. Mainstream American values are reasserting themselves, not because anyone really believes in them, but through a posture of moral impotence. If anyone has given this mood a definitive cinematic expression, it is Robert Altman in his new film Nashville. The story takes place in the country music capital, home of unscrupulous hustlers and dedicated artists alike. Altman captures the hypocrisy and the decency, the pace, the glitz, and the emptiness that pervade the music industry. The time is the summer of 1976, in the midst of a bicentennial and a presidential campaign. An ominous political theme permeates the picture and is largely responsible for its unsettling effect.

Altman has been making brilliant films for years now. yet they have generally missed the public attention they merit. Often denied adequate promotion by tight-wad studios. these films have frequently disappeared from local theaters after the briefest of runs. Akman's films have received "R" ratings when I able films with more money behind them were rated "PG." MA SH still remains his single box-office success, yet his subsequent films have been at least as good. McCabe and Mrs. Miller, The Long Goodbye, Thieves Like Us and California Split, each a masterpiece, have not reached large audiences. With Nashville Altman appears to be finally getting the public acclaim he deserves.

Always willing to take risks, Altman has introduced significant new departures from standard cinematic form. He relies heavily on spontaneity and allows his cast plenty of room for improvisation. Somehow his cameras are always there to record the most exceptional moments. In Nashville the actors who portray recording artists were encouraged to write their own songs for the film. They came up with some amazing material which suited perfectly the needs of the story. Altman is noted for his soundtrack overlaps which give us several conversations at once, phrases drifting in and out of earshot, yet always the essential utterances are audible. There is always more in an Altman film that you can possibly see or hear at any one time. The spontaneity and soundtrack realism give his films a documentary-like quality.

Nashville is bursting with vignettes from every level of the country music business. We glimpse the lives of stars and promoters as well as aspiring performers, groupies, and hangers-on. Several subplots move along through a masterful editing which leaves no strand dangling. The characters provide a zany cross-section of American types - from the satisfied and hypocritical middle Americans to the alienated and cynical younger generation. Nobody is spared the most flaying criticism, yet some examples of decency and sympathetic humanity emerge.

Henry Gibson is an absolute natural as Haven Hamilton, big daddy of country music and hillbilly philosopher. In the opening scène we witness a recording session for his new bicentennial single. "We must be doin' something right to last 200 years," goes the refrain. In the midst of the mawkish patriotism he stops to upbraid the piano player and walks out of the studio. Throughout the film he maintains a consistent persona - always charming. always ruthless. always the performer.

Nashville's sweetheart, Barbara Jean, is played by Ronee Blakley. Some of the film's best moments, both musically and dramatically . are hers. During a concert at Opryland we watch her stage presence shatter as she keeps interrupting her musicians to indulge the audience in pathetic childhood reminiscences. Ms. Blakley wrote her own script for this scène the night before it was shot. The result is a convincing portrayal of a sensitive performer who is being destroyed by the pressures of the industry.

Lily Tomlin appears as a gospel singer and mother of two deaf children. She contributes a warm presence amid the banality and opportunism of the other characters. Geraldine Chaplin is a giddy and pretentious BBC journalist, continuously babbling vapid monologues on American decadence into her portable tape recorder and shoving her unwanted microphone in people's faces. Keith Carradine, familiar from other Altman films, plays a rock singer pursuing a recording career and a string of sexual conquests in Nashville. Shelley Duvall, another Altman regular, is a wandering groupie afloat in the Nashville scene. The cast is enormous and boasts many excellent performances, too numerous to single out.

Along with the country performers the film follows the campaign of Hal Philip Walker, a third party presidential contender. He is running on the "Replacement Party" ticket, and his sound-truck is continually blaring his speeches. His platform is one of vague populism - most of his barbs are aimed at lawyers in government. "Did you ever ask a lawyer how to get somewhere'? You got lost, didn't you'" He wants to replace the "Star Spangled Banner" and "the red tape and black tape government." His campaign manager is as unscrupulous as any, however, and throughout the film we watch him cajole and manipulate the various performers into appearing at a rally for his candidate.

The rally takes place at the Parthenon, a replica in Nashville of the Athenian temple. All the principal characters are present, as well as an audience of country and western fans. A sudden outburst of random violence disrupts the program, and one of the performers is shot. The body is quickly carried away, the assassin is captured, and the show continues in an uneasy mood. No roles have changed - spectators remain spectators and performers remain performers. The mike is taken by an aspiring singer played by Barbara Harris. She begins to sing a song which Keith Carradine wrote with some disquieting lyrics: "You may say that I ain't tree, but it don't worry me." Soon the other performers join in and finally the audience begins to sing along.