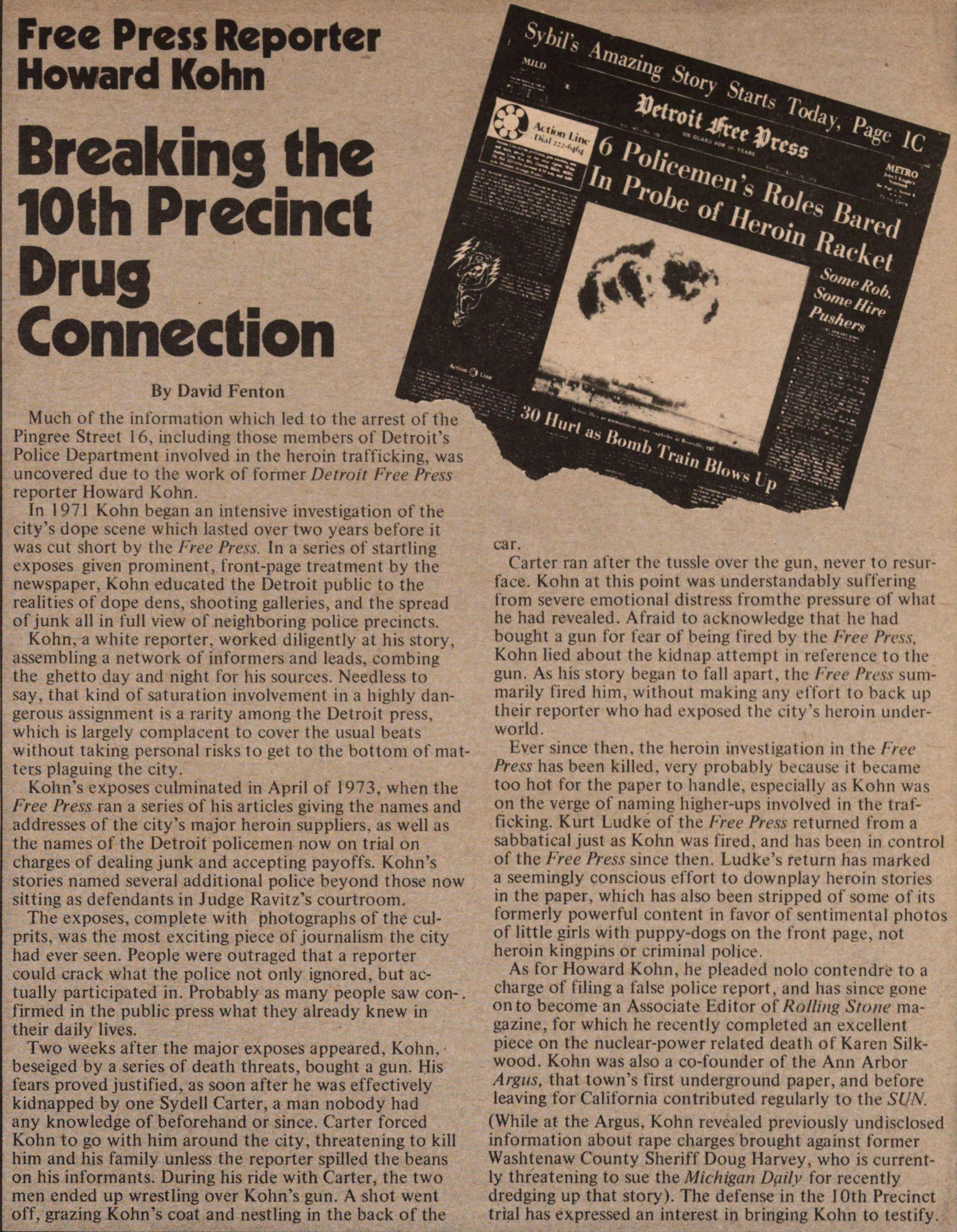 Much of the information which led to the arrest of the ' Pingree Street 16, including those members of Detroit's Pólice Department involved in the heroin trafficking, was uncovered due to the work of former Detroit Free Press reporter Howard Kohn. In 1971 Kohn began an intensive investigation of the city's dope scène which lasted over two years before it was cut short by the i'ree Press. In a series of startling exposes given prominent, front-page treatment by the newspaper, Kohn educated the Detroit public to the realities of dope dens, shooting galleries, and the spread of junk all in full view of neighboring pólice precinets. Kohn, a white reporter, worked diligently at his story, assembling a network of informers and leads, combing the ghetto day and night tor his sources. Needless to say, that kind of saturation involvement in a highly dangerous assignment is a rarity among the Detroit press, which is largely complácent to cover the usual beats without taking personal risks to get to the bottom of matters plaguing the city. Kohn's exposes culminated in April of 1973, when the Free Press ran a series of his articles giving the names and addresses of the city's major heroin suppliers, as well as the names of the Detroit policemen now on trial on charges of dealing junk and accepting payoffs. Kohn's stories named several additional pólice beyond those now sitting as defendants in Judge Ravitz's courtroom. The exposes, complete with photographs of the culprits, was the most exciting piece of journalism the city had ever seen. People were outraged that a reporter could crack what the pólice not only ignored, but actually participated in. Probably as many people saw con-, firmed in the public press what they already knew in their daily lives. Two weeks after the major exposes appeared, Kohn, beseiged by a series of death threats, bought a gun. His fears proved justified, as soon after he was effectively kidnapped by one Sydell Carter, a man nobody had any knowledge of beforehand or since. Carter forced Kohn to go with him around the city, threatening to kill him and his family unless the reporter spilied the beans on his informants. During his ride with Carter, the two men ended up wrestling over Kohn's gun. A shot went off, grazing Kohn's coat and nestling in the back of the car. Carter ran after the tussle over the gun, never to resurface. Kohn at this point was understandably suffering from severo emotional distress fromthe pressure of wliat he had revealed. Afraid to acknowledge that he had bought a gun tor leur of being fired by the Free Press, Kohn lied about the kidnap attenipt in referente to the gun. As his story began to fall apart, the l'rce Press summarily fired him, without making any effort to back up their reporter who had exposed the city's heroin underworld. Ever since then. the heroin investigation in the Free Press has been killed, very probably because it becaroe too hot for the paper to handle, especially as Kohn was on the verge of naming higher-ups involved in the trafficking. Kurt Ludke of the Free Press returned from a sabbatical just as Kohn was fired, and has been n control of the Free Press since then. Ludke's return has marked a seemingly conscious effort to downplay heroin stories in the paper, which has also been stripped of some of its formerly powerful content in favor of sentimental photos of little girls with puppy-dogs on the front page, not heroin kingpins or criminal pólice. As for Howard Kohn, he pleaded nolo contendré to a charge of filing a false pólice report, and has since gone onto become an Associate Editor oí Rolling Stone magazine, for which he recently completed an excellent piece on the nuclear-power related death of Karen Silkwood. Kohn was also a co-founder of the Ann Arbor Argus, that town's first underground paper, and before leaving for California contributed regularly to the SUN. (While at the Argus, Kohn revealed previously undisclosed information about rape charges brought against former Washtenaw County Sheriff Doug Harvey, who is currently threatening to sue the Michigan Daily for recently dredging up that story). The defense in the lOth Precinct trial has expressed an interest in bringing Kohn to testify.