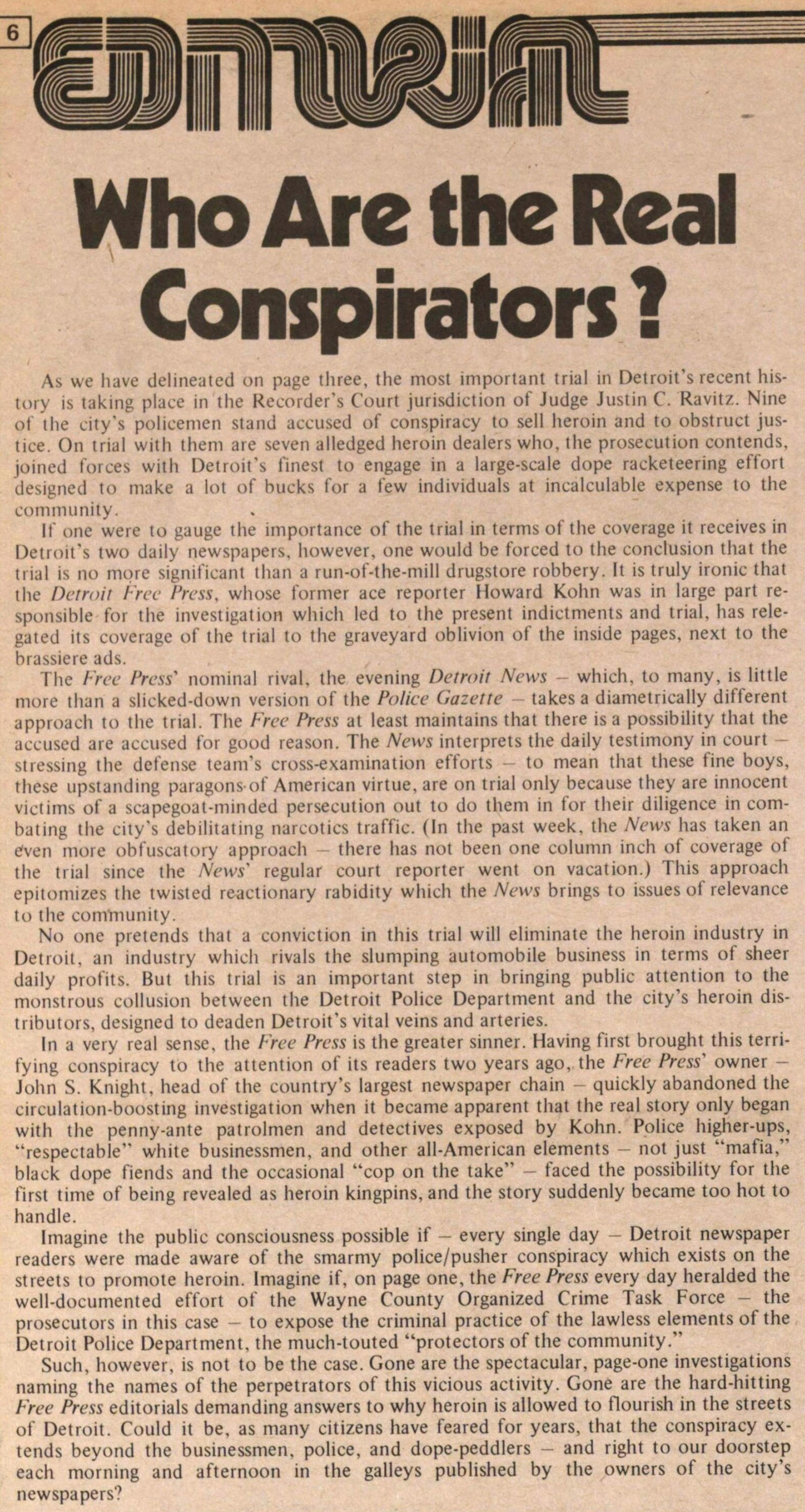 As ve Ikivo delineated on page three, the most important trial in Detroit's recent histoiy is taking place in the Recorder's Court jurisdiction of Judge Justin C. Ravitz. Nine pi the city's policemen stand accused of conspiracy to sell heroin and to obstruct justice. On trial with them are seven alledged heroin dealers who. the prosecution contends, oined torces with Detroit's l'inest to engage in a large-scale dope racketeering effort designed to make a lol of bucks for a few individuals at incalculable expense lo the communiiy. It" one were to gauge the importance of the trial in terms of the coverage it receives in Detroit's two daily newspapeis, however, one would be forced to the conclusión that the mal is no more significant thaii a i un-of-the-mill drugstore robbery. It is truly ironie that the Detroit Free Press, whose tonner ace reporter Howard Kohn was in large part rejponsible fot the investigation which led to the present indictments and trial, has relega ted its coverage of the trial to the graveyard oblivion of the inside pages, next to the brassiere ads. The Free Press' nominal rival, the evening Detroit News which. to many. is little more than a slicked-down version of the Pólice Gazette takesa diametrically different approach to the trial. The Free l'ress at least maintains that there isa possibility that the accused are accused for good reason. The News interprets the daily testimony in court - stressing the defense team's cross-examination effort! - to mean that these fine boys, these upstanding paragons-of American virtue, are on trial only beeause they are innocent victims of a scapegoat-minded persecution out to do them in for their diligence in combating the city's debilitating narcotica traffic. (In the past week, the News has taken an eVen more obfuscatory approach there has not been one column inch of coverage ot the trial since the News' regular court reporter went on vacation.) This approach epitomizes the twisted reactionary rabidity which the News brings to issues of relevance to the corrrrnunity. No one pretends that a conviction in this trial will elimínate the heroin industry in Detroit, an Industry which rivals the slumping automobile business in terms of sheer daily profits. But this trial is an important step in bringing public attention to the monstrous collusion between the Detroit Pólice Department and the city's heroin distributois, designed to deaden Detroit's vital veins and arteries. In a very real sense, the Free Press is the greater sinner. Having first brought this terrifying conspiracy to the attention of its readers two years ago, the Free Press' owner - John S. Knight, head of the country's largest newspaper chain - quickly abandoned the circulation-boosting investigation when it became apparent that the real story only began with the penny-ante patrolmen and detectives exposed by Kohn. Pólice higher-ups, "respectable" white businessmen, and other all-American elements - not just "mafia," black dope fiends and the occasional "cop on the take" - faced the possibiiity for the first time of being revealed as heroin kingpins, and the story suddenly became too hot to handle. Imagine the public consciousness possible if - every single day - Detroit newspaper readers were made aware of the smarmy policepusher conspiracy which exists on the streets to promote heroin. Imagine if, on page one, the Free Press every day heralded the well-documented effort of the Wayne County Organized Crime Task Force - the prosecutors in this case - to exposé the criminal practice of the lawless elements of the Detroit Pólice Department, the much-touted "protectors of the community." Such, however, is not to be the case. Gone are the spectacular, page-one investigations naming the names of the perpetrators of this vicious activity. Gone are the hard-hitting Free Press editorials demanding answers to why heroin is allowed to flourish in the streets of Detroit. Could it be, as many citizens have feared for years, that the conspiracy extends beyond the businessmen, pólice, and dope-peddlers - and riglit to our doorstep each morning and afternoon in the galleys published by the owners of the city's newspapers?