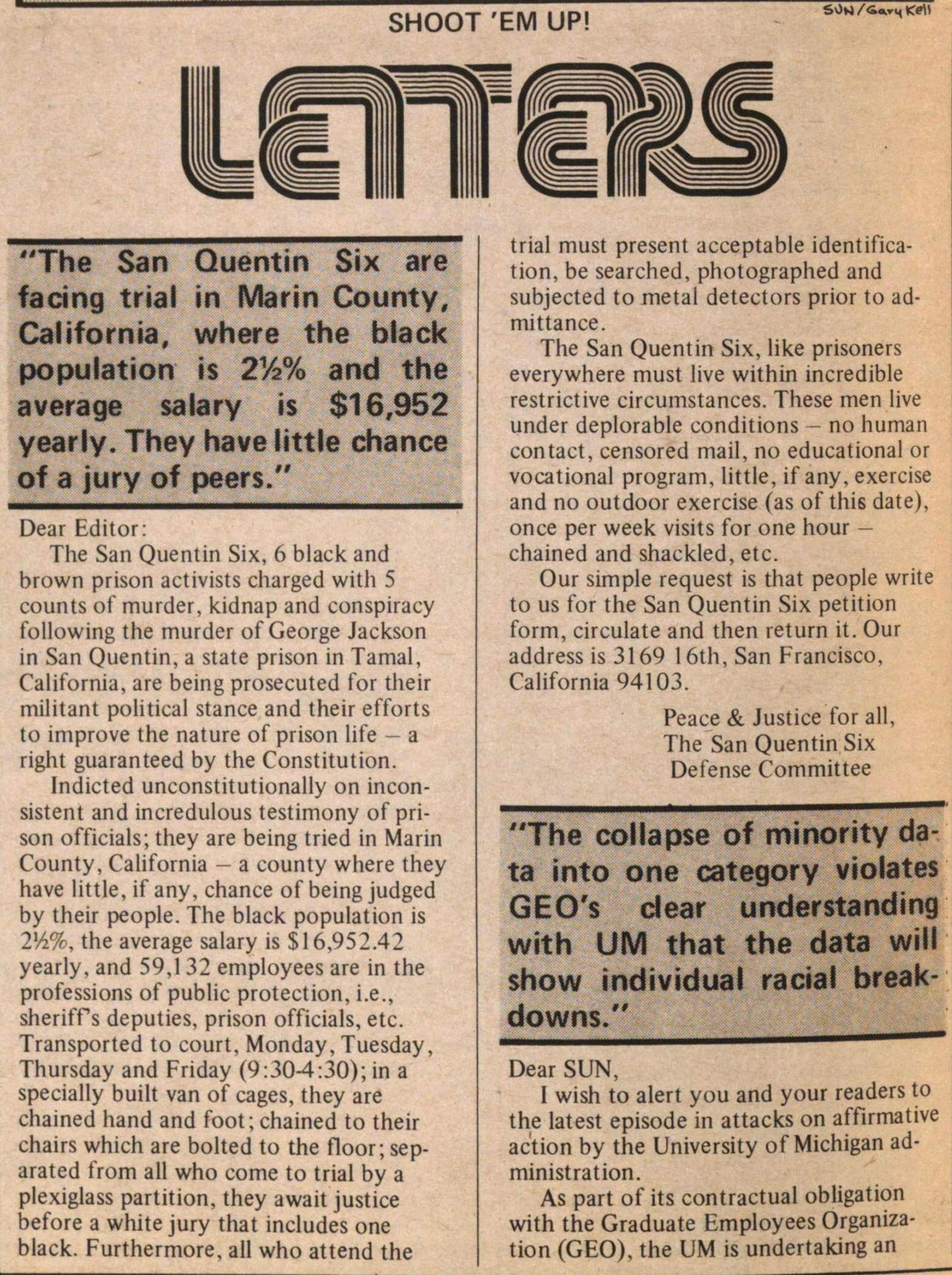 "The San Quentin Six are facing trial in Marin County, California, where the black population is 2%% and the average salary is $16,952 yearly. They have little chance of a jury of peers." Dear Editor: The San Quentin Six, 6 black and brown prison activists charged with 5 counts of murder, kidnap and conspiracy following the murder of George Jackson in San Quentin, a state prison in Tamal, California, are being prosecuted for their militant political stance and their efforts to improve the nature of prison life - a right guaranteed by the Constitution. Indicted unconstitutionally on inconsistent and incredulous testimony of prison officials; they are being tried in Marin County, California - a county where they have little, if any , chance of being judged by their people. The black population is 2V4%, the average salary is $16,952.42 yearly, and 59,1 32 employees are in the professions of public protection, i.e., sheriff s deputies, prison officials, etc. Transported to court, Monday, Tuesday, Thursday and Friday (9:304:30); in a specially built van of cages, they are chained hand and foot; chained to their chairs which are bolted to the floor; separated from all who come to trial by a plexiglass partition, they await justice before a white jury that includes one black. Furthermore, all who attend the trial must present acceptable identification, be searched, photographed and subjected to metal detectors prior to admittance. The San Quentin Six, like prisoners everywhere must live within incredible restrictive circumstances. These men live under deplorable conditions - no human contact, censored mail, no educational or vocational program, little, if any, exercise and no outdoor exercise (as of this date), once per week visits for one hour - chained and shackled, etc. Our simple request is that people write to us for the San Quentin Six petition form, circuíate and then return it. Our address is 3169 16th,San Francisco, California 94103. Peace & Justice for all, The San Quentin Six Defense Committee "The collapse of minority data into one category violates GEO's clear understanding with UM that the data will show individual racial breakdowns _ Dear SUN, I wish to alert you and your readers to the latest episode in attacks on affirmative ac'tion by the University of Michigan administration. As part of its contractual obligation with the Gradúate Employees Organization (GEO), the UM is undertaking an analysis of female and minority representation in the gradúate school and the gradúate work forcé. GEO has found, however, that the university is lumping all minorities into one category of "minority"; and including non-citizens as minorities. The collapsing of minority data into one category violatesGEO's ciear understanding with the UM that the data will show the following racial breakdowns: Black, Asian, Native American, Chicano and other Spanish Surnamed. It violates also Pres. Robben Fleming's directive in the UM's original 1973 Affirmative Action Report submitted to HEW, which calis for racial breakdown in the data. Furthermore. it precludes the possibility of setting up goals and timetables for each minority group. The inclusión of non-citizens in the data also violates GEO's understanding with the UM. Since the data on noncitizens has been separated in the past in the UM's Record, one cannot but conclude that this action, like the action of lumping minorities together, is an attempt to make the data look more impressive. The UM cannot be allowed to get away with hiring minority foreign students to fulfill its affirmative action obligations. A further example of apparent lack of good faith effort on the part of the UM is in its refusal to include a recruitment program of gradúate students in its affirmative action program for gradúate employees. GEO, in a grievance that is going to arbitration, has argued that the UM must actively recruit women and minorities in order to improve female and minority representation in the pool of available applicants for gradúate student jobs. Sincerely, Send your comments, criticisms, suggestions, etc. to: The SUN 'letters, 603 E. William Street, Ann Arbor, Michigan