Voice Of The People 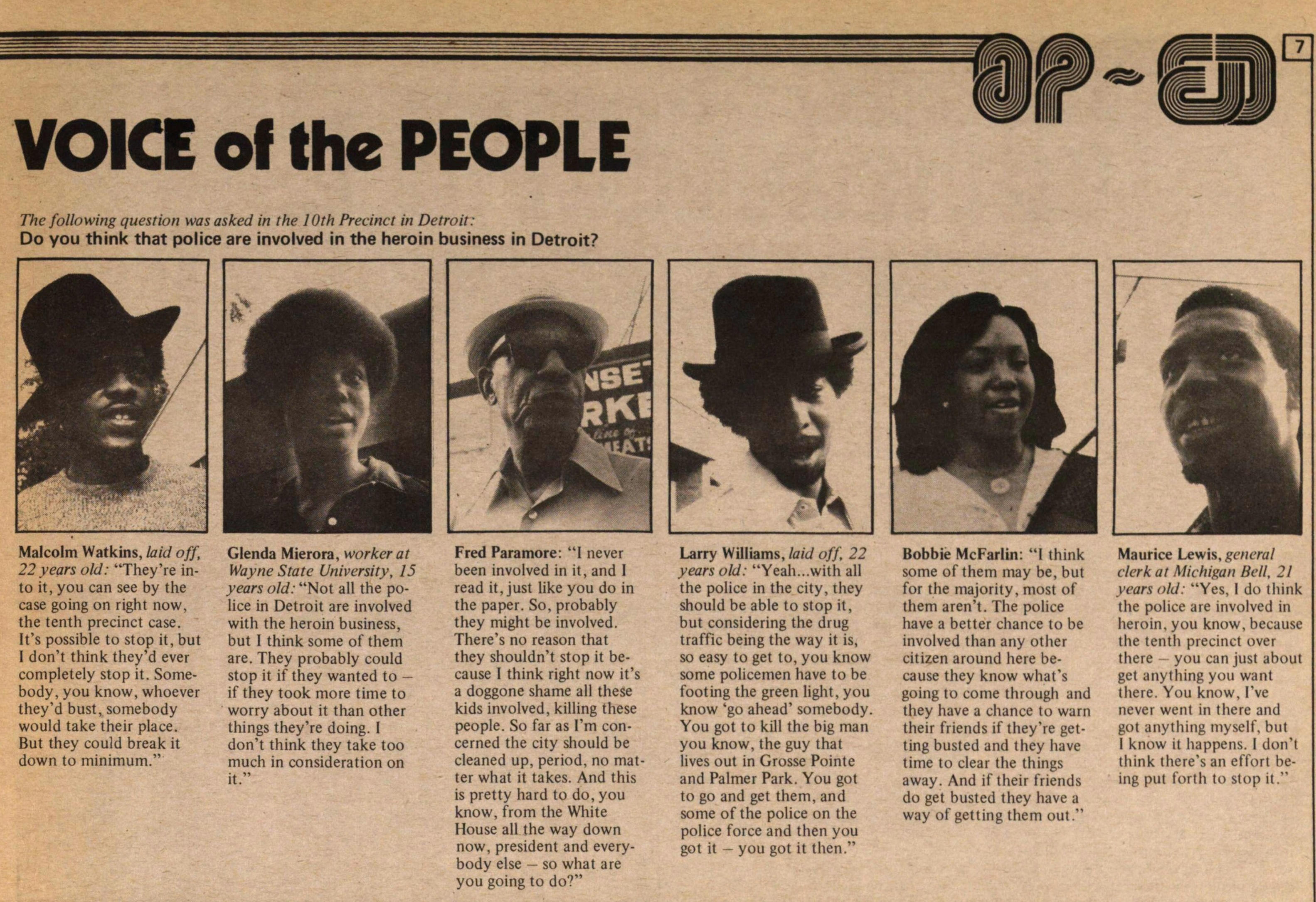 The following question was asked in the lOth Precinct in Detroit: Do you think that pólice are involved in the heroin business in Detroit? Malcolm Watkins, laid off, 22 years old: "They're into it.you can see by the case going on right now, the tenth precinct case. It's possible to stop it, but I don't think they'd ever completely stop it. Somebody, y ou know, whoever they'd bust, somebody would take their place. But they could break it down to minimum." Glenda Mierora, workerat Wayne State University, 15 years old: "Not all the police in Detroit are involved with the heroin business, but I think some of them are. They probably could stop it if they wanted to - if they took more time to worry about it than other things they're doing. I don't think they take too much in consideration on it." Fred Paramore: "I never been involved in it, and I read it, just like you do in the paper. So, probably they might be involved. There's no reason that they shouldn't stop it because I think right now it's a doggone shame all these kids involved, killing these people. So far as I'm concerned the city should be cleaned up, period, no matter what it takes. And this is pretty hard to do, you know, from the White House all the way down now, president and everybody else - so what are you going to do?" Larry Williams, laid off, 22 years old: "Yeah...with all the pólice in the city, they should be able to stop it, but considering the drug traffic being the way it is, so easy to get to, you know some policemen have to be footing the green light, you know 'go ahead' somebody. You got to kill the big man you know, the guy that lives out in Grosse Pointe and Palmer Park. You got to go and get them, and some of the pólice on the pólice forcé and then you got it - you got it then." Bobbie McFarlin: "I think some of them may be, but for the majority, most of them aren't. The pólice have a better chance to be involved than any other citizen around here because they know what's going to come through and they have a chance to warn their friends if they're getting busted and they have time to clear the things away. And if their friends do get busted they have a way of getting them out." Maurice Lewis, general vlerk at Michigan Bell. 21 years oíd: "Yes, I do t hink the pólice are involved in heroin, you know, because the tenth precinct over there - you can just about get anything you want there. You know, l've never went in there and got anything myself, but 1 know it happens. I don't tlünk there's an effort being put forth to stop it."