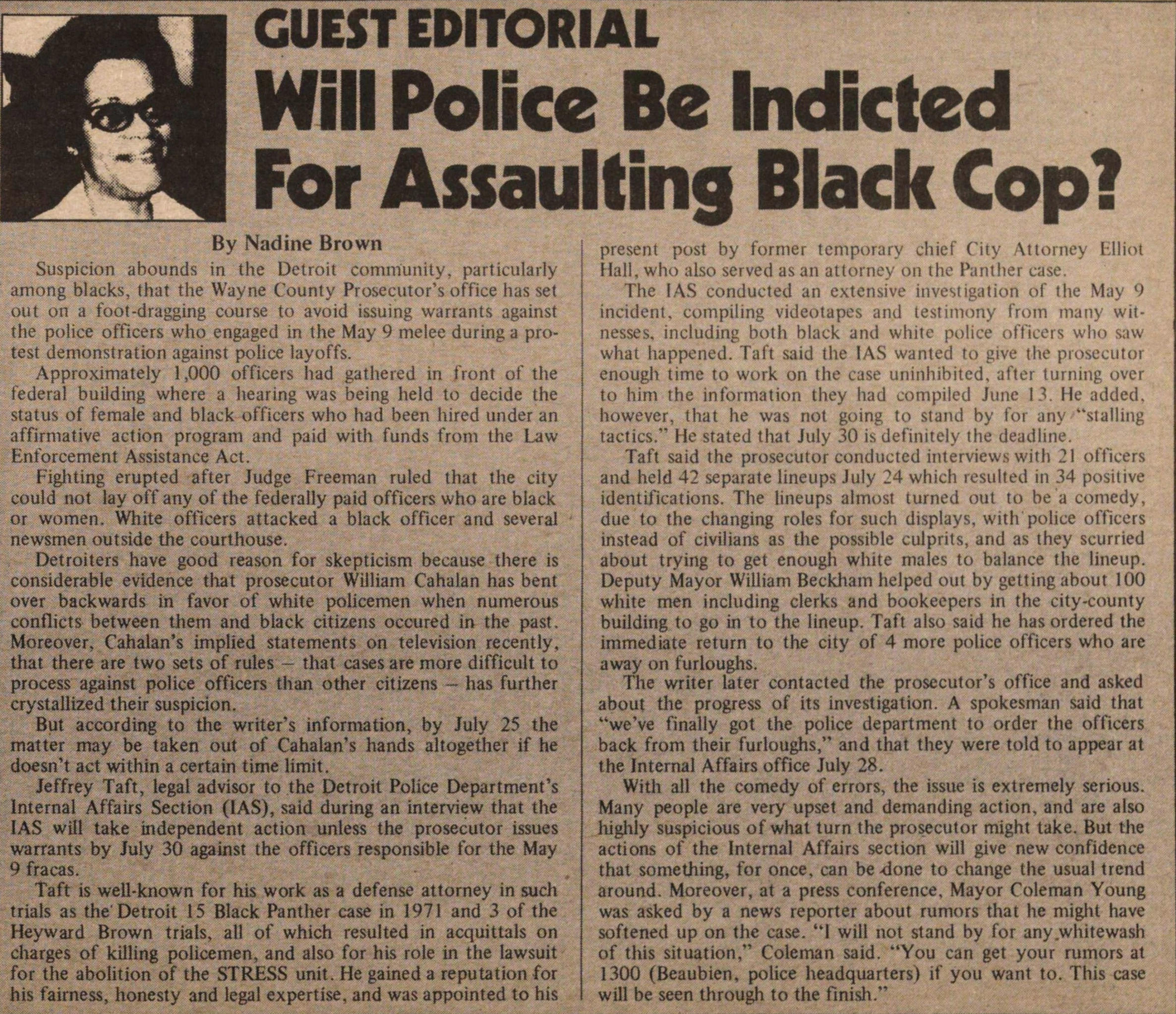 Will Police Be Indicated For Assaulting Black Cop?

Suspicion abounds in the Detroit community, particularly among blacks, that the Wayne County Prosecutor's office has set out on a foot-dragging course to avoid issuing warrants against the police officers who engaged in the May 9 melee during a protest demonstration against police layoffs.

Approximately 1,000 officers had gathered in front of the federal building where a hearing was being held to decide the status of female and black officers who had been hired under an affirmative action program and paid with funds from the Law Enforcement Assistance Act.

Fighting erupted after Judge Freeman ruled that the city could not lay off any of the federally paid officers who are black or women. White officers attacked a black officer and several newsmen outside the courthouse.

Detroiters have good reason for skepticism because there is considerable evidence that prosecutor William Cahalan has bent over backwards in favor of white policemen when numerous conflicts between them and black citizens occured in the past. Moreover, Cahalan's implied statements on television recently, that there are two sets of rules - that cases are more difficult to process against police officers than other citizens - has further crystallized their suspicion.

But according to the writer's information, by July 25 the matter may be taken out of Cahalan's hands altogether if he doesn't act within a certain time limit.

Jeffrey Taft, legal advisor to the Detroit Police Department 's Internal Affairs Section (IAS), said during an interview that the IAS will take independent action unless the prosecutor issues warrants by July 30 against the officers responsible for the May 9 fracas.

Taft is well-known for his work as a defense attomey in such trials as the Detroit 15 Black Panther case in 1971 and 3 of the Heyward Brown trials, all of which resulted in acquittals on charges of killing policemen, and also for his role in the lawsuit for the abolition of the STRESS unit. He gained a reputation for his fairness, honesty and legal expertise, and was appointed to his present post by former temporary chief City Attorney Elliot Hall, who also served as an attorney on the Panther case.

The IAS conducted an extensive investigation of the May 9 incident, compiling videotapes and testimony from many witnesses. including both black and white police officers who saw what happened. Taft said the IAS wanted to give the prosecutor enough time to work on the case uninhibited, after turning over to him the information they had compiled June 13. He added. however, that he was not going to stand by for any "stalling tactics." He stated that July 30 is definitely the deadline.

Taft said the prosecutor conducted interviews with 21 officers and held 42 separate lineups July 24 which resulted in 34 positive identifications. The lineups almost turned out to be a comedy, due to the changing roles for such displays, with police officers instead of civilians as the possible culprits, and as they scurried about trying to get enough white males to balance the lineup. Deputy Mayor William Beckham helped out by getting about 100 white men including clerks and bookeepers in the city-county building to go in to the lineup. Taft also said he has ordered the immediate return to the city of 4 more police officers who are away on furloughs.

The writer later contacted the prosecutor's office and asked about the progress of its investigation. A spokesman said that "we've finally got the police department to order the officers back from their furloughs," and that they were told to appear at the Internal Affairs office July 28.

With all the comedy of errors, the issue is extremely serious. Many people are very upset and demanding action, and are also highly suspicious of what turn the prosecutor might take. But the actions of the Internal Affairs section will give new confidence that something, for once, can be done to change the usual trend around. Moreover, at a press conference, Mayor Coleman Young was asked by a news reporter about rumors that he might have softened up on the case. "I will not stand by for any whitewash of this situation," Coleman said. "You can get your rumors at 1300 (Beaubien, police headquarters) if you want to. This case will be seen through to the finish."