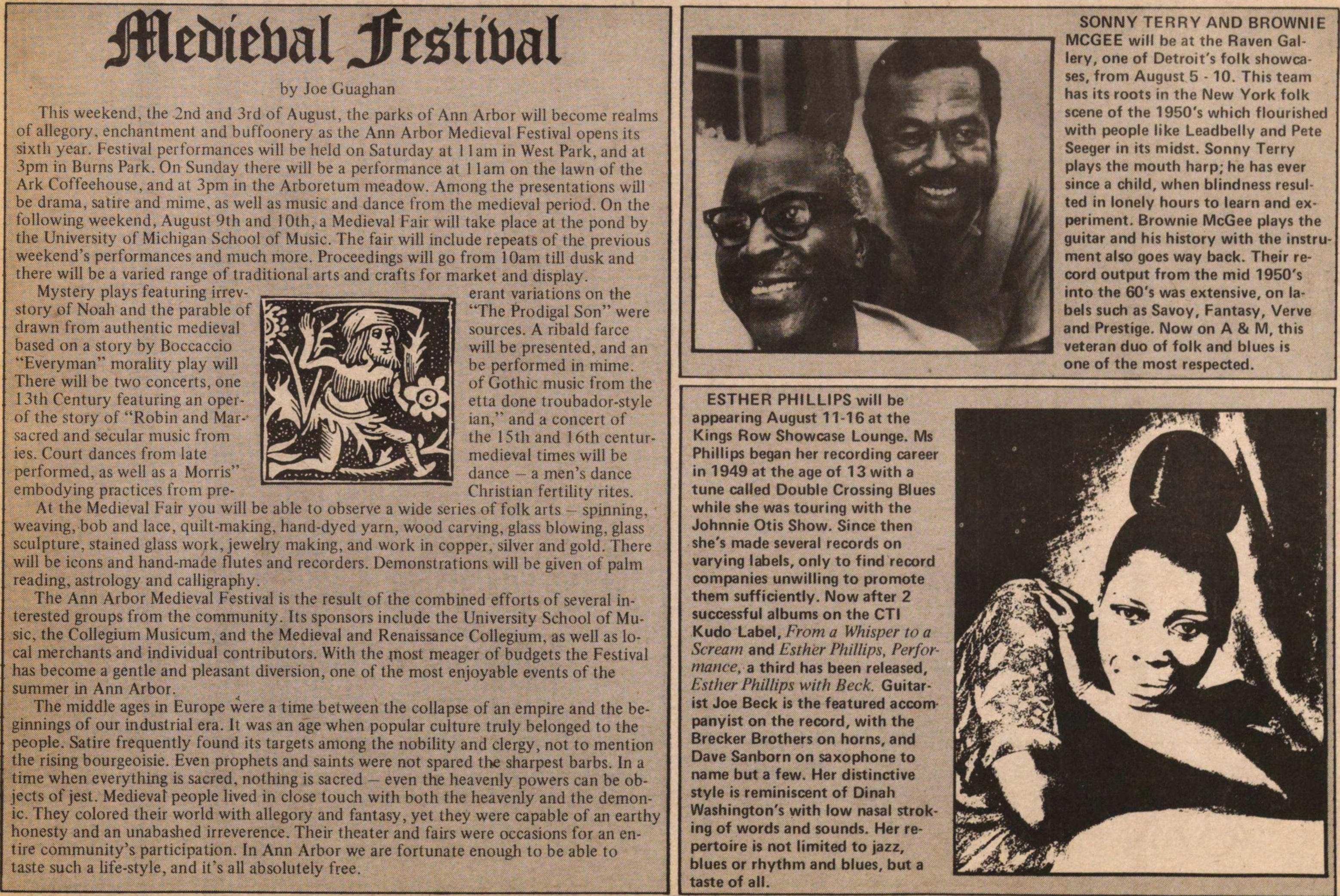 This weekend, the 2nd and 3rd of August, the parks of Ann Arbor will become realms of aliegory, enchantment and buffoonery as the Ann Arbor Medieval Festival opens its sixth year. Festival performances will be held on Saturday at 1 lam in West Park, and at 3pm in Burns Park. On Sunday there will be a performance at I lam on the lawn of the Ark Coffeehouse, and at 3pm in the Arboretum meadow. Among the presentations will be drama, satire and mime, as well as rnusic and dance from the medieval period. On the following weekend, August 9th and lOth, a Medieval Fair will take place at the pond by the University of Michigan School of Music. The fair will include repeats of the previous weekend's performances and much more. Proceedings will go from lOam till dusk and there will be a varied range of traditional arts and crafts for market and display. Mystery plays fea turing irrevslory of Noali and the parable of drawn from authentic medieval based on a story by Boccaccio "Everyman" morality play will There will be two concerts, one 13th Century featuring an operof the story of "Robin and Mar-sacred and secular music from ies. Court dances from late performed, as well as a Morris" embodying practices from erant variations on the "The Prodigal Son" were sources. A ribald farce will be presented, and an be performed in mime. ofGothic music f rom the etta done troubador-styie ian," and a concert of the 15th and löth centurmedieval times will be dance - a men's dance Chrisüan fertility rites. At the Medieval Fair you will be able to observe a wide series of folk arts ■ spinning, weaving, bob and lace, quilt-making, hand-dyed yarn, wood carving, glass blowing, glass sculpture. stained glass work, jewelry making, and work in copper, silver and gold. There will be icons and hand-made flutes and recorders. Demonstrations will be given of palm reading, astrology and calligraphy. The Ann Arbor Medieval Festival is the result of the combined efforts of several interested groups from the community. lts sponsors include the University School of Music, the Collegium Musicum, and the Medieval and Renaissance Collegium, as well as local merchants and individual contributors. With the most meager of budgets the Festival has become a gentle and pleasant diversion, one of the most enjoyable events of the summer in Ann Arbor. The middle ages in Europe were a time between the collapse of an empire and the beginnings of our industrial era. lt was an age when popular culture truly belonged to the people. Satire frequently found its targets among the nobility and clergy, not to mention the rising bourgeoisie. Even prophets and saints were not spared the sharpest barbs. In a time when everything is sacred, nothing is sacred - even the heavenly powers can be objects of jest. Medieval people lived in close touch with both the heavenly and the demonie. They colored their world with allegory and fantasy, yet they were capable of an earthy honesty and an unabashed irreverence. Their theater and fairs were occasions tbr an entire community's participation. In Ann Arbor we are fortúnate enough to be able to taste such a life-style, and it's all absolutely free. SONNY TERRY AND BROWNIE MCGEE will be at the Raven Gal lery, one of Detroit's folk showcases, from August 5 - 10. This team has ts roots in the New York folk scène of the 1950's which flourished with people like Leadbelly and Pete Seeger in its midst. Sonny Terry plays the mouth harp; he has ever since a child, when blindness resul ted in lonely hours to learn and experiment. Brownie McGee piays the guitar and his history with the instrument also goes way back. Their record output from the mid 1950's into the 60's was extensive, on labels such as Savoy, Fantasy, Verve and Prestige. Now on A & M, this veteran duo of folk and blues is one of the most respected. ESTHER PHILLIPS will be appear ing August 1 1 -1 6 at the Kings Row Showcase Lounge. Ms Phillips began her recording career in 1949 at the age of 1 3 with a tune ca lied Doublé Crossing Blues while she was touring with the Johnnie Otis Show. Since then she's made several records on varying labels, only to f ind record companies unwilling to promote them sufficiently. Now after 2 successf ui albums on the CTI Kudo Label, From a Whisper to a Screain and t'sthcr Pliillips, Performance, a third has been released. Hstter Phillips with Beek. Guitarist Joe Beek is the featured accom panyist on the record, with the Brecker Brothers on horns, and Dave Sanborn on saxophone to name but a few. Her distinctive style is reminiscent of Dinah Washington's with low nasal stroking of words and sounds. Her repertoire is not limited to jazz, blues or rhythm and blues, but a taste of all.