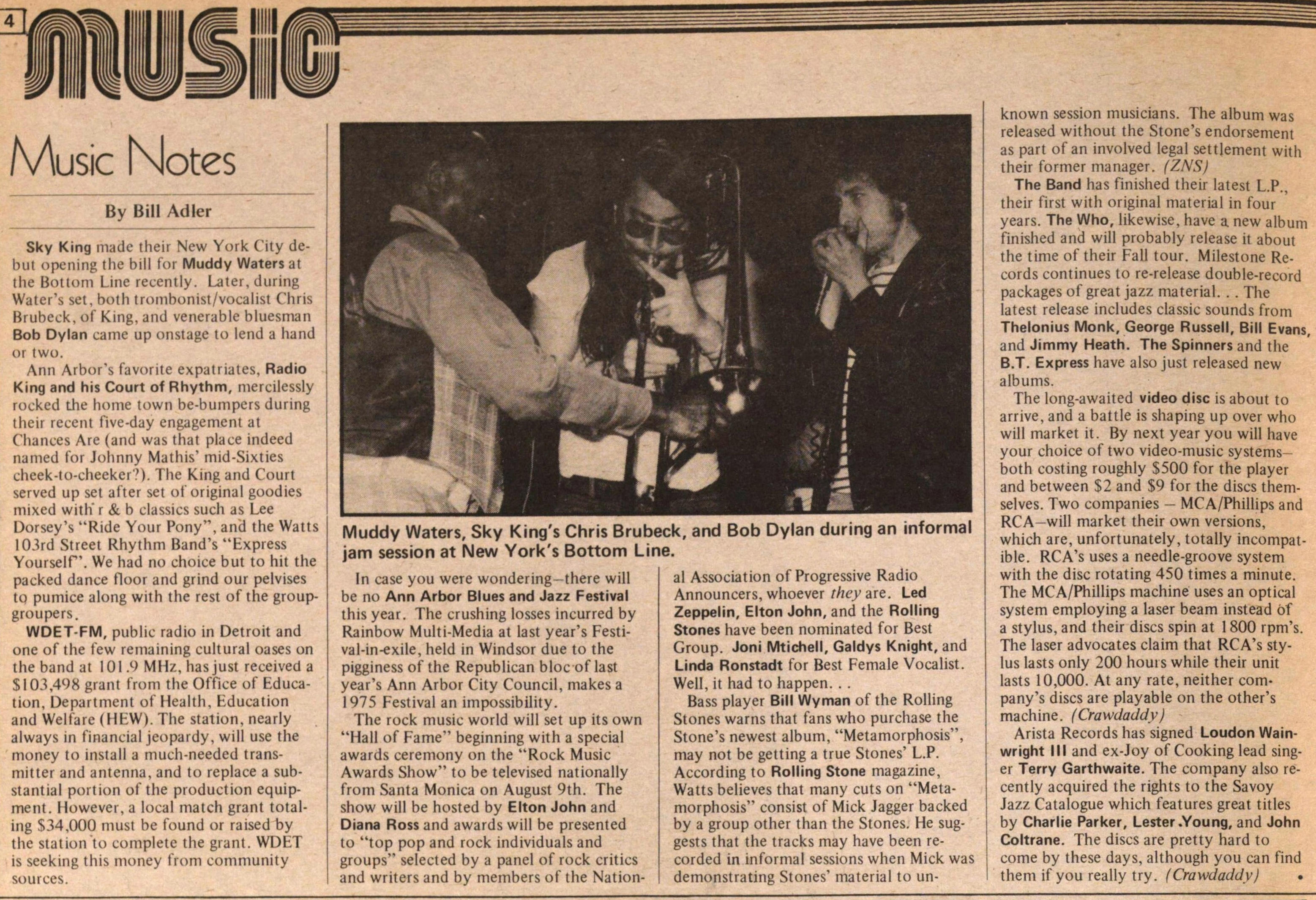 Sky King made their New York City debut opening the bill for Muddy Waters at the Bot toni Line recently. Later, during Water's set. both trombonistvocalist Chris Brubeck, of King, and venerable bluesman Bob Dylan came up onstage to lend a hand or two. Ann Arbor's favorite expatriates. Radio King and his Court of Rhythm, mercilessly rocked the home town be-bumpcrs during their recent five-day engagement at Chances Are (and was that place indeed named for Johnny Mathis" mid-Sixties chcek-to-cheeker'.'). The King and Court served up set after set of original goodies mixed witli r & b classics such as Lee Dorsey's "Ride Your Pony", and the Watts 103rd Street Rhythm Band's "Express Yourself'. We had no choice but to hit the packed dance floor and grind our pelvises to pumice along with the rest of the groupgroupers. WDET-FM, public radio in Detroit and one of the few remaining cultural oases on the band at 101 3 MHz, has just received a $103,498 grant trom the Office of Education, Department of Health, Education and Welfare (HEW). The station, nearly always in financial jeopardy, will use the money to install a much-needed transmitter and antenna, and to replace a substantial portion of the product ion equipment. However, a local match grant totaling 534,000 must be found or raised by the station 'to complete the grant. WDET is seeking this money ffom community sources. In case you were wondering-there will be no Ann Arbor Blues and Jazz Festival this year. The crushing losses incurred by Rainbow Multi-Media at last year's Festival-in-exile, held in Windsor due to the pigginess of the Republican bloc of last year's Ann Arbor City Council, makes a 1975 Festival an impossibility. The rock music world will set up its own "Hall of Fame" beginning with a special awards ceremony on the "Rock Music Awards Show" to be televised nationally from Santa Monica on August 9th. The show will be hosted by Elton John and Diana Ross and awards will be presented to "top pop and rock individuals and groups" selected by a panel of rock critics and writers and by members of the al Association of Progressive Radio Announcers, whoever they are. Led Zeppelin, Elton John, and the Rolling Stones have been nominated for Best Group. Joni Mtichell, Galdys Knight, and Linda Ronstadt for Best Female Vocalist. Well, it had to happen. . . Bass player Bill Wyman of the Rolling Stones warns that fans who purchase the Stone's newest album, "Metamorphosis", may not be getting a true Stones' L.P. According to Rolling Stone magazine, Watts believes that many cuts on "Metamorphosis" consist of Mick Jagger backed by a group other than the Stones. He suggests that the tracks may have been recorded in informal sessions when Mick was demonstrating Stones' material to known session musicians. The album was released without the Stone's endorsement as part of an involved legal settlement with their former manager. (ZNS) The Band has finished their latest L.P., their first with original material in four years. The Who, likewise, have a new album finished and will probably release it about the time of their Fall tour. Milestone Records continúes to re-release double-record packages of great jazz material. . . The latest release includes classic sounds from Thelonius Monk, George Russell, Bill Evans, and Jimmy Heath. The Spinners and the B.T. Express have also just released new albums. The long-awaited video disc is about to arrive, and a battle is shaping up over who will market it. By next year you will have your choice of two video-music systemsboth costing roughly $500 for the player and between $2 and $9 for the discs themselves. Two companies - MCAPhillips and RCA- will market their own versions, which are, unfortunately, totally incompatible. RCA's uses a needle-groove system with the disc rotating 450 times a minute. The MCAPhillips machine uses an optical system employing a laser beam instead óf a stylus, and their discs spin at 1 800 rpm's. The laser advocates claim that RCA's stylus lasts only 200 hout s while their unit lasts 10,000. At any rate, neither company's discs are playable on the other's machine. (Crawdaddy) Arista Records has signed Loudon Wainwright III and ex-Joy of Cooking lead singer Terry Garthwaite. The company also recently acquired the rights to the Savoy Jazz Catalogue which features great titles by Charlie Parker, Lester .Young, and John Coltrane. The discs are pretty hard to come by these days, although you can find them if you really try. (Crawdaddy)