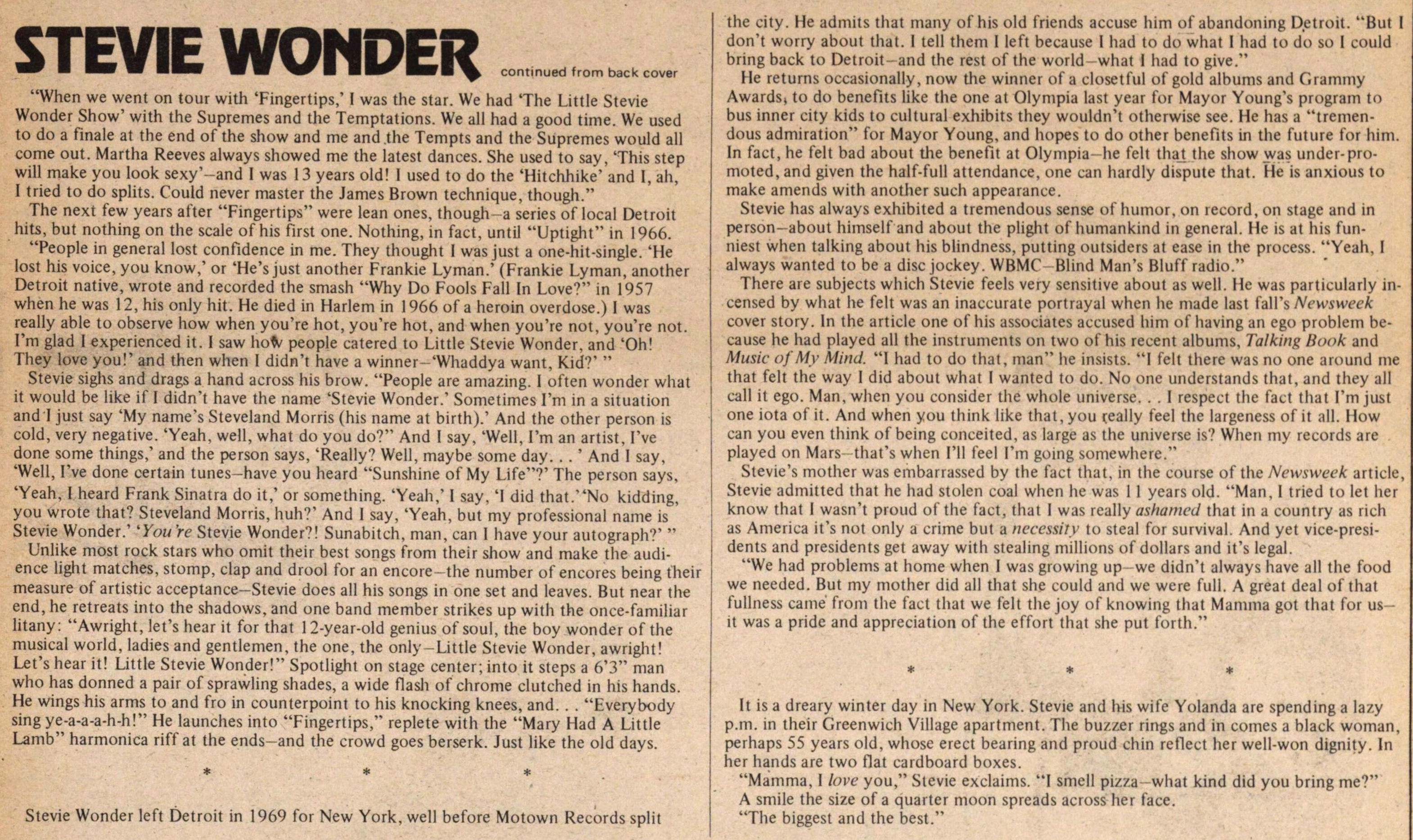 continued from back cover

"When we went on tour with 'Fingertips,' I was the star. We had 'The Little Stevie Wonder Show' with the Supremes and the Temptations. We all had a good time. We used to do a finale at the end of the show and me and the Tempts and the Supremes would all come out. Martha Reeves always showed me the latest dances. She used to say, 'This step will make you look sexy-and I was 13 years old! I used to do the 'Hitchhike' and I, ah, I tried to do splits. Could never master the James Brown technique, though."

The next few years after "Fingertips" were lean ones, though-a series of local Detroit hits, but nothing on the scale of his first one. Nothing, in fact, until "Uptight" in 1966.

"People in general lost confidence in me. They thought I was just a one-hit-single. 'He lost his voice, you know,' or 'He's just another Frankie Lyman.' (Frankie Lyman, another Detroit native, wrote and recorded the smash "Why Do Fools Fall In Love?" in 1957 when he was 12, his only hit. He died in Harlem in 1966 of a heroin overdose.) I was really able to observe how when you're hot, you're hot, and when you're not, you're not. I'm glad I experienced it. I saw how people catered to Little Stevie Wonder, and 'Oh! They love you!' and then when I didn't have a winner-'Whaddya want, Kid?' "

Stevie sighs and drags a hand across his brow. "People are amazing. I often wonder what it would be like if I didn't have the name 'Stevie Wonder.' Sometimes I'm in a situation and I just say 'My name's Steveland Morris (his name at birth).' And the other person is cold, very negative. 'Yeah, well, what do you do?" And I say, 'Well, I'm an artist, I've done some things,' and the person says, 'Really? Well, maybe some day. . . ' And I say, 'Well, I've done certain tunes-have you heard "Sunshine of My Life"?' The person says, 'Yeah, I heard Frank Sinatra do it,' or something. 'Yeah,' I say, 'I did that."No kidding, you wrote that? Steveland Morris, huh?' And I say, 'Yeah, but my professional name is Stevie Wonder.' 'You 're Stevie Wonder?! Sunabitch, man, can 1 have your autograph?' "

Unlike most rock stars who omit their best songs from their show and make the audience light matches, stomp, clap and drool for an encore-the number of encores being their measure of artistic acceptance-Stevie does all his songs in one set and leaves. But near the end, he retreats into the shadows, and one band member strikes up with the once-familiar litany: "Awright, let's hear it for that 12-year-old genius of soul, the boy wonder of the musical world, ladies and gentlemen, the one, the only-Little Stevie Wonder, awright! Let's hear it! Little Stevie Wonder!" Spotlight on stage center; into it steps a 6'3" man who has donned a pair of sprawling shades, a wide flash of chrome clutched in his hands. He wings his arms to and fro in counterpoint to his knocking knees, and. . . "Everybody sing ye-a-a-a-h-h!" He launches into "Fingertips," replete with the "Mary Had A Little Lamb" harmonica riff at the ends-and the crowd goes berserk. Just like the old days.

Stevie Wonder left Detroit in 1969 for New York, well before Motown Records split the city. He admits that many of hisold friends accuse him of abandoning Detroit. "But I don't worry about that. I tell them I left because I had to do what I had to do so I could bring back to Detroit-and the rest of the world-what I had to give."

He returns occasionally, now the winner of a closetful of gold albums and Grammy Awards, to do benefits like the one at Olympia last year for Mayor Young's program to bus inner city kids to cultural exhibits they wouldn't otherwise see. He has a "tremendous admiration" for Mayor Young, and hopes to do other benefits in the future for him. In fact, he felt bad about the benefit at Olympia- he felt that the show was under-promoted.and given the half-full attendance, one can hardly dispute that. He is anxious to make amends with another such appearance.

Stevie has always exhibited a tremendous sense of humor, on record, on stage and in person-about himself and about the plight of humankind in general. He is at his funniest when talking about his blindness, putting outsiders at ease in the process. "Yeah. I always wanted to be a disc jockey. WBMC Blind Man's Bluff radio."

There are subjects which Stevie feels very sensitive about as well. He was particularly incensed by what he felt was an inaccurate portrayal when he made last fall's Newsweek cover story. In the article one of his associates accused him of having an ego problem because he had played all the instruments on two of his recent albums, Talking Bonk and Music of My Mind. "I had to do that, man" he insists. "I felt there was no one around me that felt the way I did about what I wanted to do. No one understands that, and they all call it ego. Man, when you consider the whole universe. . . I respect the fact that I'm just one iota of it. And when you think like that, you really feel the largeness of it all. How can you even think of being conceited, as large as the universe is? When my records are played on that's when I'll feel I'm going somewhere."

Stevie's mother was embarrassed by the fact that, in the course of the Newsweek article, Stevie admitted that he had stolen coal when he was 11 years old. "Man, I tried to let her know that I wasn't proud of the fact, that I was really ashamed that in a country as rich as America it's not only a crime but a necessity to steal for survival. And yet vice-presidents and presidents get away with stealing millions of dollars and it's legal.

"We had problems at home when I was growing up we didn't always have all the food we needed. But my mother did all that she could and we were full. A great deal of that fullness carne from the fact that we felt the joy of knowing that Mamma got that for us - it was a pride and appreciation of the effort that she put forth."

It is a dreary winter day in New York. Stevie and his wife Yolanda are spending a lazy p.m. in their Greenwich Village apartment. The buzzer rings and in comes a black woman, perhaps 55 years old, whose erect bearing and proud chin reflect her well-won dignity. In her hands are two flat cardboard boxes.

"Mamma, I love you," Stevie exclaims. "I smell pizza- what kind did you bring me?"

A smile the size of a quarter moon spreads across her face.

"The biggest and the best."