Legacy of the 'Little Big Man' 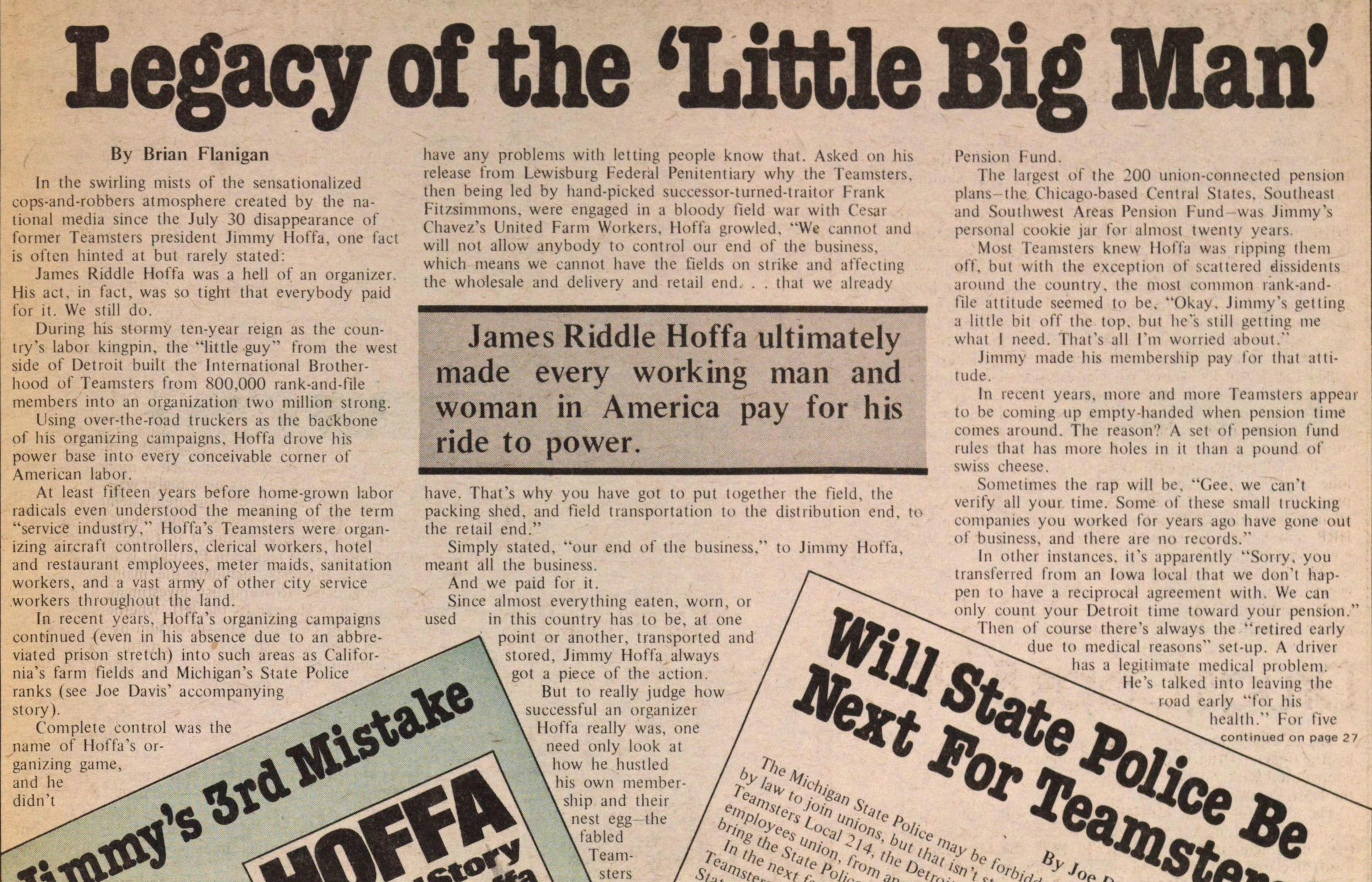 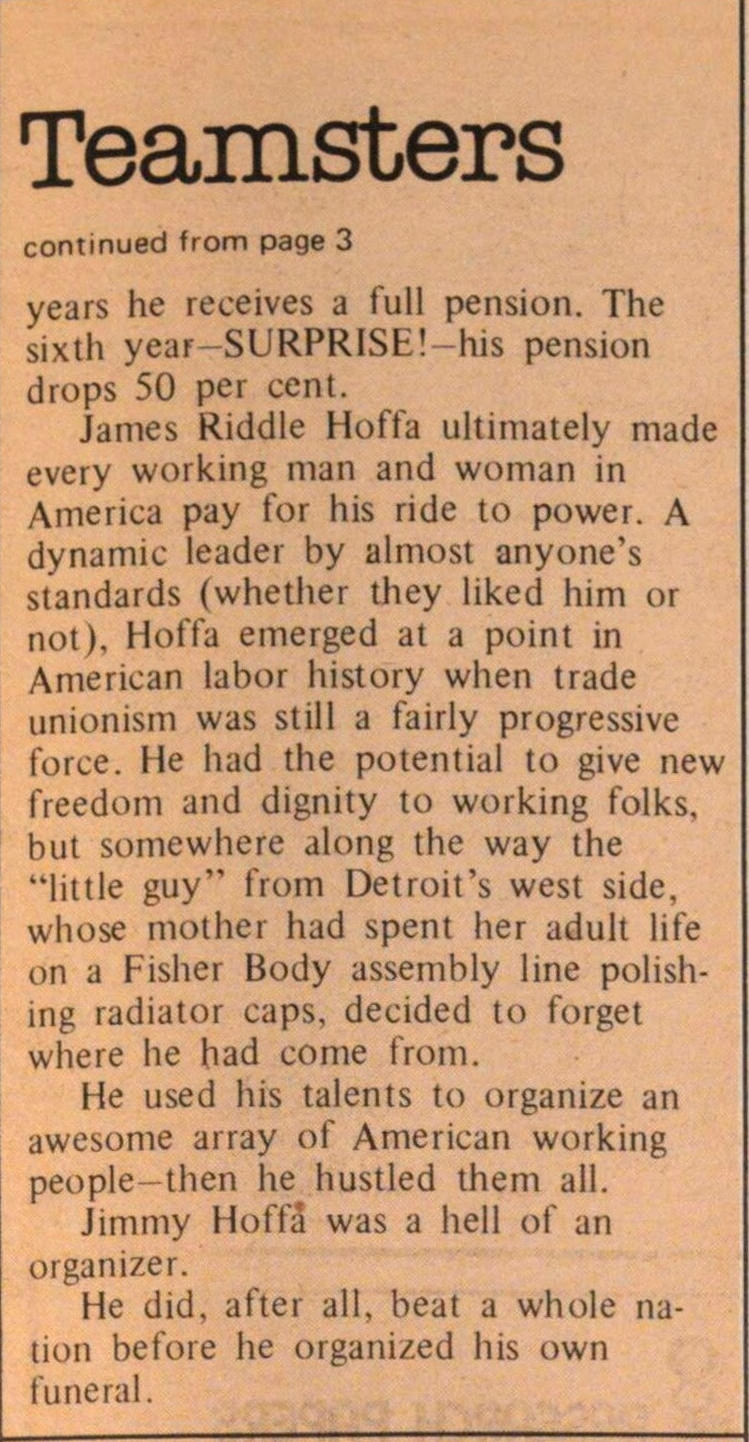 In the swirling mists of the sensationalized cops-and-robbers atmosphere created by the national media since the July 30 disappearance of former Teamsters president Jimmy Hoffa, one fact is often hinted at but rarely stated:

James Riddle Hoffa was a hell of an organizer. His act, in fact, was so tight that everybody paid for it. We still do.

During his stormy ten-year reign as the country's labor kingpin, the "little guy" from the west side of Detroit built the International Brotherhood of Teamsters from 800,000 rank-and-file members into an organization two million strong.

Using over-the-road truckers as the backbone of his organizing campaigns, Hoffa drove his power base into every conceivable corner of American labor.

At least fifteen years before home-grown labor radicals even understood the meaning of the term "service industry." Hoffa's Teamsters were organizing aircraft controllers, clerical workers, hotel and restaurant employees, meter maids, sanitation workers, and a vast army of other city service workers throughout the land.

In recent years, Hoffa's organizing campaigns continued (even in his absence due to an abbreviated prison stretch) into such areas as California's farm fields and Michigan's State Police ranks (see Joe Davis' accompanying story).

Complete control was the name of Hoffa's organizing game, and he didn't have any problems with letting people know that. Asked on his release from Lewisburg Federal Penitentiary why the Teamsters, then being led by hand-picked successor-turned-traitor Frank Fitzsimmons, were engaged in a bloody field war with Cesar Chavez's United Farm Workers, Hoffa growled, "We cannot and will not allow anybody to control our end of the business, which means we cannot have the fields on strike and affecting the wholesale and delivery and retail end . . . that we already have. That's why you have got to put together the field, the packing shed, and field transportation to the distribution end, to the retail end."

And we paid for it.

Since almost everything eaten, worn, or used in this country has to be, at one point or another, transported and stored, Jimmy Hoffa always got a piece of the action.

But to really judge how successful an organizer Hoffa really was, one need only look at how he hustled his own membership and their nest egg—in the fabled Teamsters Pension Fund.

Most Teamsters knew Hoffa was ripping them off, but with the exception of scattered dissidents around the country, the most common rank-and-file attitude seemed to be, "Okay, Jimmy's getting a little bit off the top, but he's still getting me what I need. That's all I'm worried about."

Jimmy made his membership pay for that attitude.

In recent years, more and more Teamsters appear to be coming up empty-handed when pension time comes around. The reason? A set of pension fund rules that has more holes in it than a pound of swiss cheese,

Sometimes the rap will be, "Gee, we can't verify all your time. Some of these small trucking companies you worked for years ago have gone out of business, and there are no records."

In other instances, it's apparently "Sorry, you transferred from an Iowa local that we don't happen to have a reciprocal agreement with. We can only count your Detroit time toward your pension."

Then of course there's always the "retired early due to medical reasons" set-up. A driver has a legitimate medical problem. He's talked into leaving the road early "for his health." For five

years he receives a full pension. The sixth year—SURPRISE!—his pension drops 50 per cent.

James Riddle Hoffa ultimately made every working man and woman in America pay for his ride to power. A dynamic leader by almost anyone's standards (whether they liked him or not), Hoffa emerged at a point in American labor history when trade unionism was still a fairly progressive force. He had the potential to give new freedom and dignity to working folks, but somewhere along the way the "little guy" from Detroit's west side, whose mother had spent her adult life on a Fisher Body assembly line polishing radiator caps, decided to forget where he had come from.

He used his talents to organize an awesome array of American working people—then he hustled them all.

Jimmy Hoffa was a hell of an organizer.

He did, after all, beat a whole nation before he organized his own funeral.