Mayor vs DPOA/Coleman vs DPOA 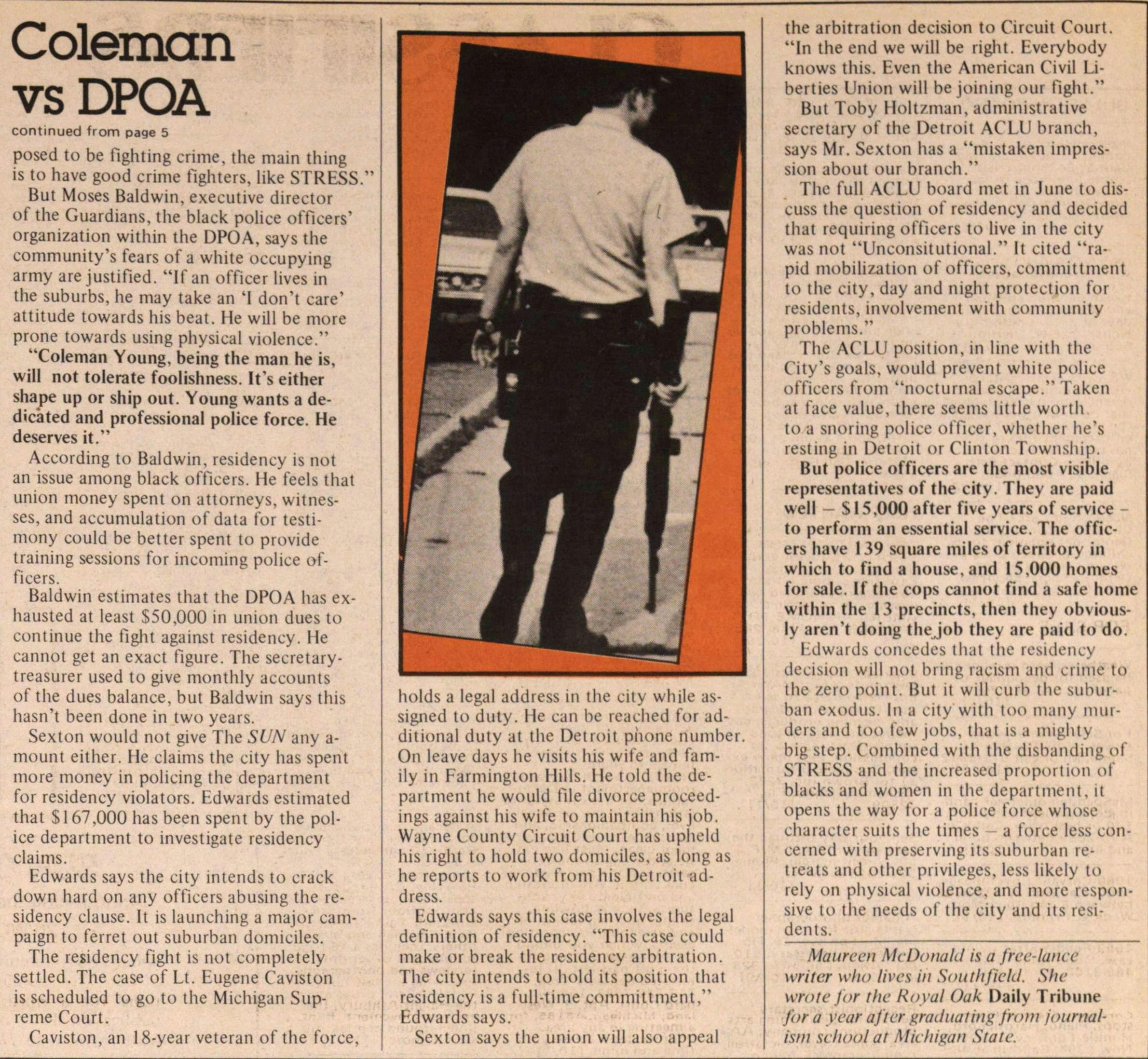 argument went all way to the U.S. Supreme Court, but was remanded back to the arbitration panel following a 1974 ruling of the Michigan Supreme Court that residency is subject to city and union negotiations.

DPOA boss Ron Sexton vows to continue the fight in the courts. "If the future of the city depends on 26,000 people living within its borders," Sexton told The SUN, "then it is dead already."

Sexton and his union put the City in a paradoxical position: it had to defend the worth of its housing and the safety of its streets against charges made by the police officers responsible for their protection.

Edwards explains that the city, if it lost the arbitration, would face more massive flight to the suburbs, plus intensified crime, racism, and hostility between police and residents. And city officials fear that white officers living in the suburbs and patrolling the inner city represent a kind of "occupying army" to residents.

Sexton says residents don't care where police live, as long as they respond to calls for help. "White officers don't live in the area anyway," he admits. "They live in white neighborhoods. If we're sup-

posed to be fighting crime, the main thing is to have good crime fighters, like STRESS."

But Moses Baldwin, executive director of the Guardians, the black police officers' organization within the DPOA, says the community's fears of a white occupying army are justified. "If an officer lives in the suburbs, he may take an 'I don't care' attitude towards his beat. He will be more prone towards using physical violence."

"Coleman Young, being the man he is, will not tolerate foolishness. It's either shape up or ship out. Young wants a dedicated and professional police force. He deserves it."

According to Baldwin, residency is not an issue among black officers. He feels that union money spent on attorneys, witnesses, and accumulation of data for testimony could be better spent to provide training sessions for incoming police officers.

Baldwin estimates that the DPOA has exhausted at least $50,000 in union dues to continue the fight against residency. He cannot get an exact figure. The secretary-treasurer used to give monthly accounts of the dues balance, but Baldwin says this hasn't been done in two years.

Sexton would not give The SUN any amount either. He claims the city has spent more money in policing the department for residency violators. Edwards estimated that $167,000 has been spent by the police department to investigate residency claims.

Edwards says the city intends to crack down hard on any officers abusing the residency clause. It is launching a major campaign to ferret out suburban domiciles.

The residency fight is not completely settled. The case of Lt. Eugene Caviston is scheduled to go to the Michigan Supreme Court.

Caviston, an 18-year veteran of the force, holds a legal address in the city while assigned to duty. He can be reached for additional duty at the Detroit phone number. On leave days he visits his wife and family in Farmington Hills. He told the department he would file divorce proceedings against his wife to maintain his job. Wayne County Circuit Court has upheld his right to hold two domiciles, as long as he reports to work from his Detroit address.

Edwards says this case involves the legal definition of residency. "This case could make or break the residency arbitration. The city intends to hold its position that residency is a full-time commitment," Edwards says.

Sexton says the union will also appeal the arbitration decision to Circuit Court. "In the end we will be right. Everybody knows this. Even the American Civil Liberties Union will be joining our fight."

But Toby Holtzman, administrative secretary of the Detroit ACLU branch, says Mr. Sexton has a "mistaken impression about our branch."

The full ACLU board met in June to discuss the question of residency and decided that requiring officers to live in the city was not "Unconstitutional." It cited "rapid mobilization of officers, commitment to the city, day and night protection for residents, involvement with community problems."

The ACLU position, in line with the City's goals, would prevent white police officers from "nocturnal escape." Taken at face value, there seems little worth to a snoring police officer, whether he's resting in Detroit or Clinton Township.

But police officers are the most visible representatives of the city. They are paid well—$15,000 after five years of service—to perform an essential service. The officers have 139 square miles of territory in which to find a house, and 15,000 homes for sale. If the cops cannot find a safe home within the 13 precincts, then they obviously aren't doing the job they are paid to do.

Edwards concedes that the residency decision will not bring racism and crime to the zero point. But it will curb the suburban exodus. In a city with too many murders and too few jobs, that is a mighty big step. Combined with the disbanding of STRESS and the increased proportion of blacks and women in the department, it opens the way for a police force whose character suits the times—a force less concerned with preserving its suburban retreats and other privileges, less likely to rely on physical violence, and more responsive to the needs of the city and its residents.

Maureen McDonald is a free-lance writer who lives in Southfield. She wrote for the Royal Oak Daily Tribune for a year after graduating from journalism school at Michigan State.