S 1. Could Make You Illegal 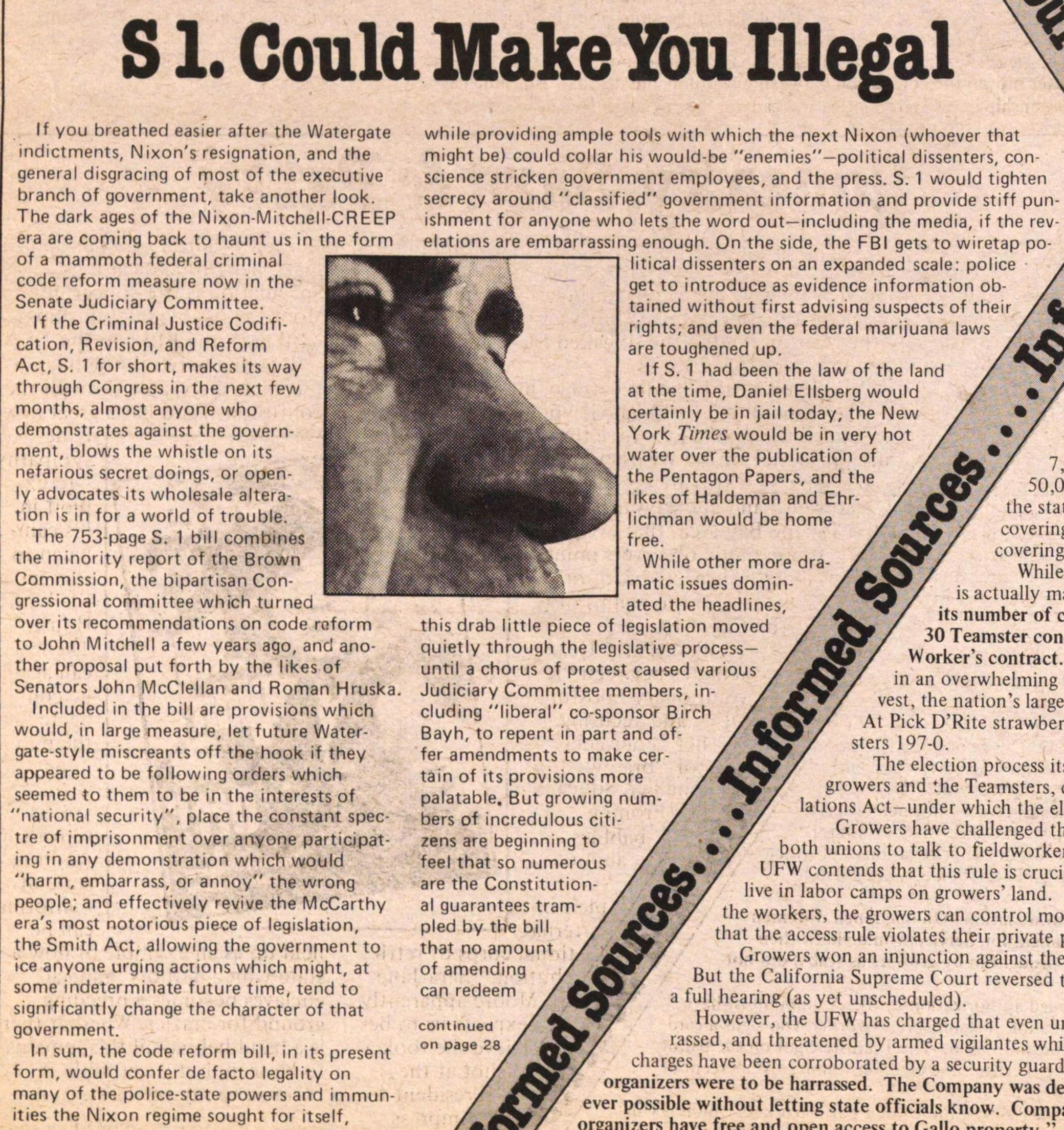 If you breathed easier after the Watergate indictments, Nixon's resignation, and the general disgracing of most of the executive branch of government, take another look. The dark ages of the Nixon-Mitchell-CREEP era are coming back to haunt us in the form of a mammoth federal criminal code reform measure now in the Senate Judiciary Committee.

If the Criminal Justice Codification, Revision, and Reform Act, S. 1 for short, makes its way through Congress in the next few months, almost anyone who demonstrates against the government, blows the whistle on its nefarious secret doings, or openly advocates its wholesale alteration is in for a world of trouble.

The 753-page S. 1 bill combines the minority report of the Brown Commission, the bipartisan Congressional committee which turned over its recommendations on code reform to John Mitchell a few years ago, and another proposal put forth by the likes of Senators John McClellan and Roman Hruska.

Included in the bill are provisions which would, in large measure, let future Watergate-style miscreants off the hook if they appeared to be following orders which seemed to them to be in the interests of "national security," place the constant spectre of imprisonment over anyone participating in any demonstration which would "harm, embarrass, or annoy" the wrong people; and effectively revive the McCarthy era's most notorious piece of legislation, the Smith Act, allowing the government to ice anyone urging actions which might, at some indeterminate future time, tend to significantly change the character of that government.

In sum, the code reform bill, in its present form, would confer de facto legality on many of the police-state powers and immunities the Nixon regime sought for itself, while providing ample tools with which the next Nixon (whoever that might be) could collar his would-be "enemies"—political dissenters, conscience stricken government employees, and the press. S. 1 would tighten secrecy around "classified" government information and provide stiff punishment for anyone who lets the word out—including the media, if the revelations are embarrassing enough. On the side, the FBI gets to wiretap political dissenters on an expanded scale: police get to introduce as evidence information obtained without first advising suspects of their rights; and even the federal marijuana laws are toughened up.

If S. 1 had been the law of the land at the time, Daniel Ellsberg would certainly be in jail today, the New York Times wouId be in very hot water over the publication of the Pentagon Papers, and the likes of Haldeman and Ehrlichman would be home free.

While other more dramatic issues dominated the headlines, this drab little piece of legislation moved quietly through the legislative process—until a chorus of protest caused various Judiciary Committee members, including "liberal" co-sponsor Birch Bayh, to repent in part and offer amendments to make certain of its provisions more palatable. But growing numbers of incredulous citizens are beginning to feel that so numerous are the Constitutional guarantees trampled by the bill that no amount of amending can redeem

the situation. They urge those who share their alarm to do anything possible to stall the bill where it is—preferably "forever," and at least until the Brown Commission's majority report, which has never reached the floor of the Senate, is looked at.

Some kind of amended bill is likely to reach the Senate floor by January. In the meantime, the National Committee Against Repressive Legislation suggests contacting people like Senator Robert Griffin, one of the bill's sponsors, and Senator Philip Hart, a Judiciary Committee member, to let them know your feelings on the matter—in hopes that they may be moved to defend more vigorously the rights of their constituents. Anyone wishing more information about this terrifying proposition or interested in actively working against it can get in touch with NCARL's Midwest office at 431 S. Dearborn, Chicago 60605; the Ann Arbor offices of the American Civil Liberties Union or the American Friends Service Committee; or the Detroit office of the National Lawyers Guild.