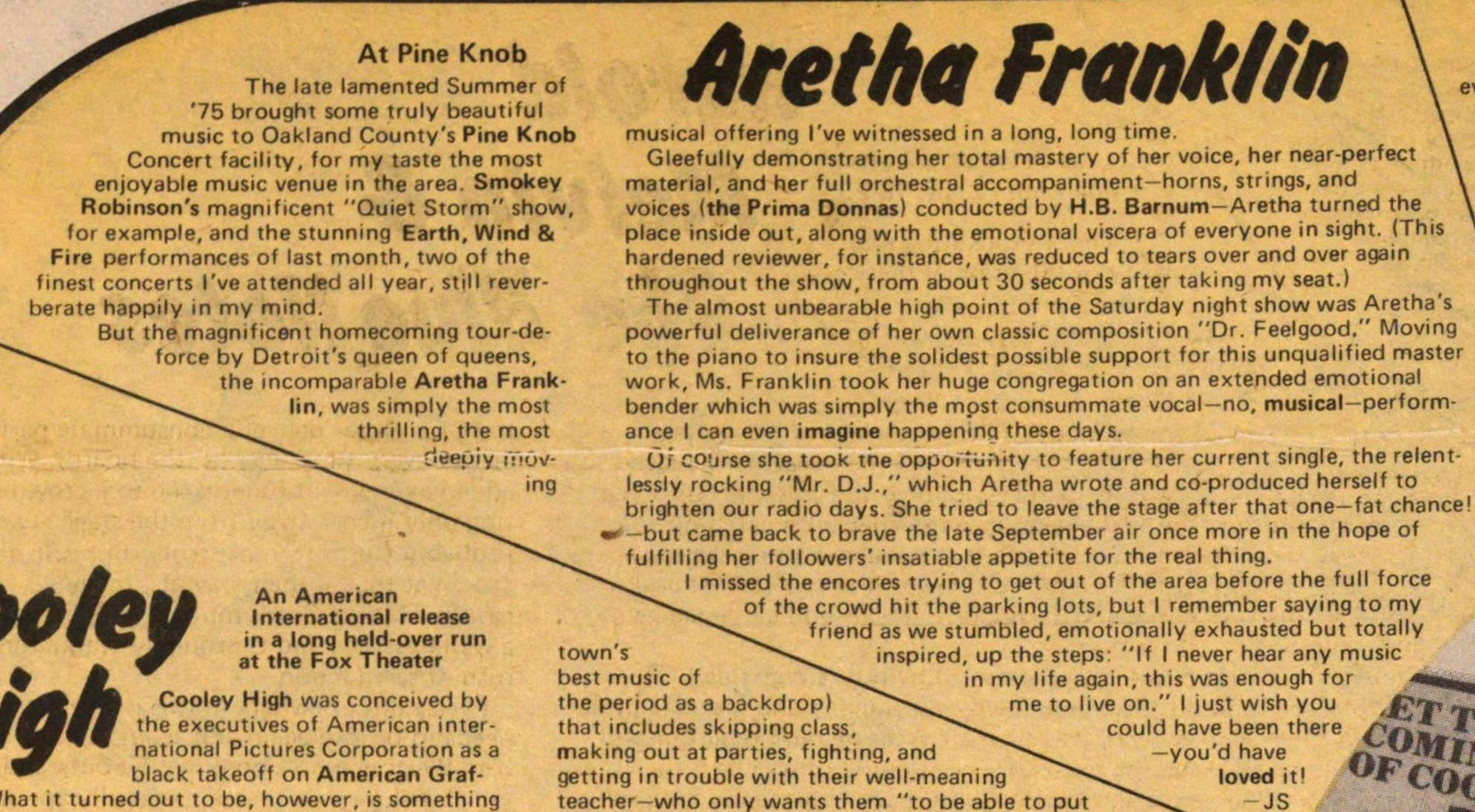 The late lamented Summer of '75 brought some truly beautiful music to Oakland County's Pine Knob Concert facility, for my taste the most enjoyable music venue in the area. Smokey Robinson's magnificent "Quiet Storm" show, for example, and the stunning Earth, Wind & Fire performances of last month, two of the finest concerts l've attended all year, still reverberate happily in my mind.

But the magnificent homecoming tour-de-force bv Detroit's queen of queens, the incomparable Aretha Franklin, was simply the most thrilling, the most deeply moving musical offering I've witnessed in a long, long time.

Gleefully demonstrating her total mastery of her voice, her near-perfect material, and her full orchestral accompaniment - horns, strings, and voices (the Prima Donnas) conducted by H.B. Barnum - Aretha turned the place inside out, along with the emotional viscera of everyone in sight. (This hardened reviewer, for instance. was reduced to tears over and over again throughout the show, from about 30 seconds after taking my seat.)

The almost unbearable high point of the Saturday night show was Aretha's powerful deliverance of her own classic composition "Dr. Feelgood." Moving to the piano to insure the solidest possible support for this unqualified masterwork, Ms. Franklin took her huge congregation on an extended emotional bender which was simply the most consummate vocal- no, musical - performance I can even imagine happening these days.

Of course she took the oppoíiüfíity to feature her current single, the relentlessly rocking "Mr. D.J.," which Aretha wrote and co-produced herself to brighten our radio days. She tried to leave the stage after that one - fat chance! - but carne back to brave the late September air once more in the hope of fulfilling her followers' insatiable appetite for the real thing.

I missed the encores trying to get out of the area before the full torce of the crowd hit the parking lots, but I remember saying to my friend as we stumbled. emotionally exhausted but totally inspired, up the steps: "If I never hear any music in my life again, this was enough for me to live on." I just wish you could have been there - you'd have loved it!