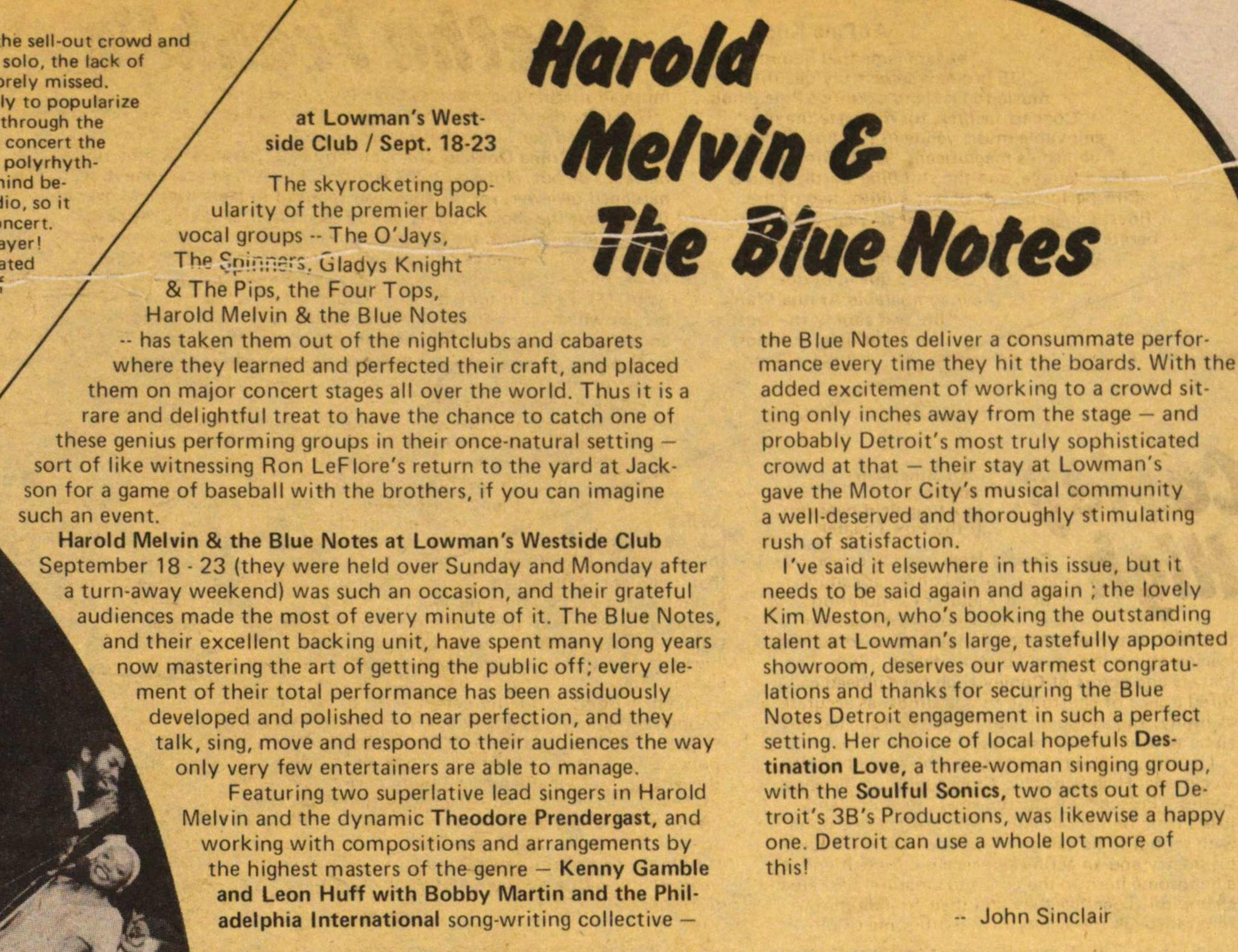 The skyrocketing popularity of the premier black vocal groups - The O'Jays, The Spinners, Gladys Knight & The Pips, the Four Tops, Harold Melvin & the Blue Notes - has taken them out of the nightclubs and cabarets where they learned and perfected their craft, and placed them on major concert stages all over the world. Thus it is a rare and delightful treat to have the chance to catch one of these genius performing groups in their once-natural setting - sort of like witnessing Ron LeFlore's return to the yard at Jackson for a game of baseball with the brothers, if you can imagine such an event.

Harold Melvin & the Blue Notes at Lowman's Westside Club September 18-23 (they were held over Sunday and Monday after a turn-away weekend) was such an occasion, and their grateful audiences made the most of every minute of it. The Blue Notes and their excellent backing unit, have spent many long years now mastering the art of getting the public off; every element of their total performance has been assiduously developed and polished to near perfection, and they talk, sing, move and respond to their audiences the way only very few entertainers are able to manage.

Featuring two superlative lead singers in Harold Melvin and the dynamic Theodore Prendergast, and working with compositions and arrangements by the highest masters of the genre - Kenny Gamble and Leon Huff with Bobby Martin and the Philadelphia International song-writing collective - the Blue Notes deliver a consummate performance every time they hit the boards. With the added excitement of working to a crowd sitting only inches away from the stage - and probably Detroit's most truly sophisticated crowd at that - their stay at Lowman's gave the Motor City's musical community a well-deserved and thoroughly stimulating rush of satisfaction.

l've said it elsewhere in this issue, but it needs to be said again and again; the lovely Kim Weston, who's booking the outstanding talent at Lowman's large, tastefully appointed showroom, deserves our warmest congratulations and thanks for securing the Blue Notes Detroit engagement in such a perfect setting. Her choice of local hopefuls Destination Love, a three-woman singing group, with the Soulful Sonics, two acts out of Detroit's 3B's Productions, was likewise a happy one. Detroit can use a whole lot more of this!