Iffy Sez by Iffy The Dopester 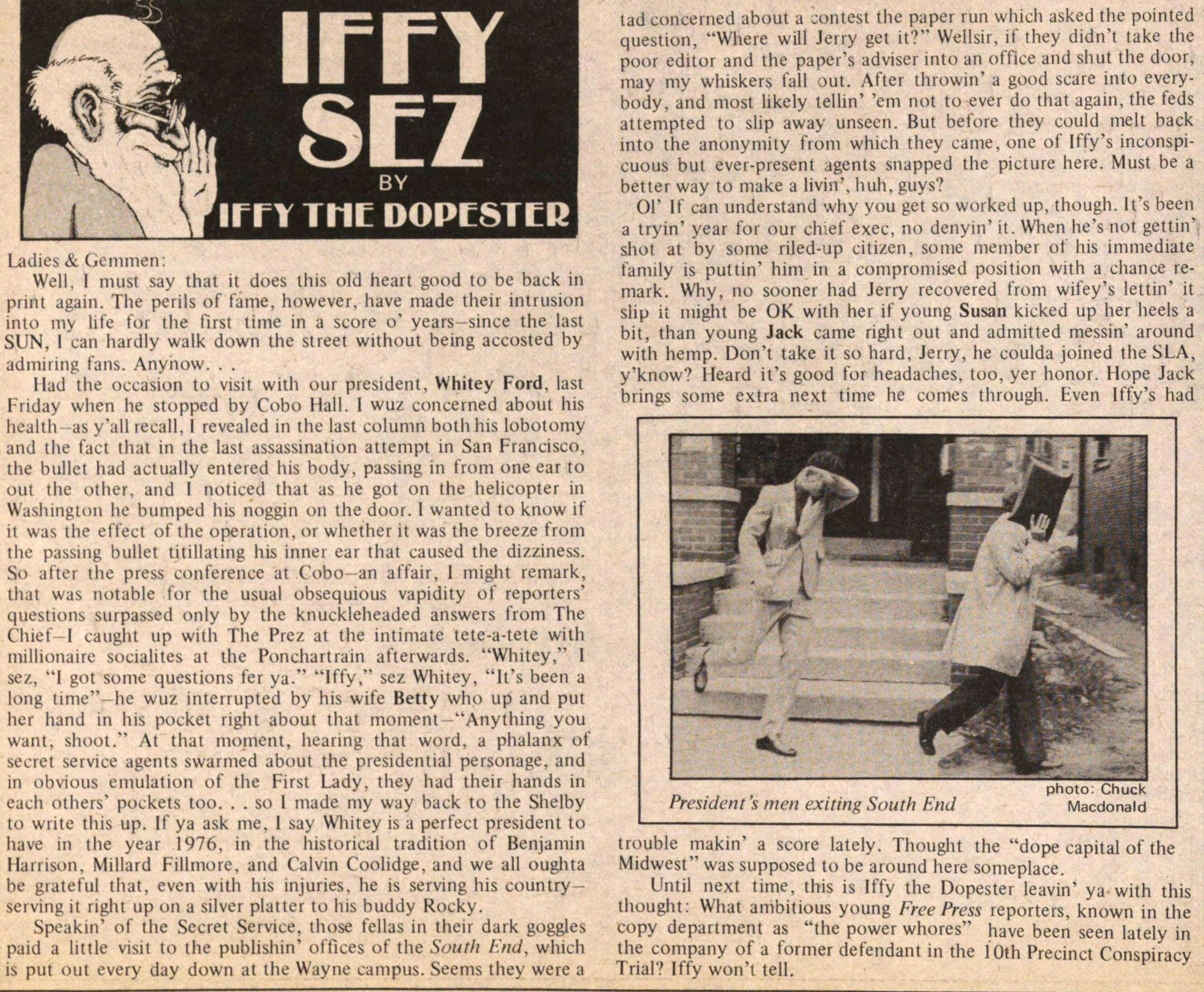 Iffy Sez
By
Iffy The Dopester

Well, I must say that it does this old heart good to be back in print again. The perils of fame, however, have made their intrusion into my life for the first time in a score o' years- since the last SUN, I can hardly walk down the street without being accosted by admiring fans. Anyhow. . .

Had the occasion to visit with our president, Whitey Ford, last Friday when he stopped by Cobo Hall. I wuz concerned about his health -as y'all recall, I revealed in the last column both his lobotomy and the fact that in the last assassination attempt in San Francisco, the bullet had actually entered his body, passing in from one ear to out the other, and I noticed that as he got on the helicopter in Washington he bumped his noggin on the door. I wanted to know if it was the effect of the operation, or whether it was the breeze from the passing bullet titillating his inner ear that caused the dizziness. So after the press conference at Cobo--an affair, I might remark, that was notable for the usual obsequious vapidity of reporters' questions surpassed only by the knuckleheaded answers from The Chief--I caught up with The Prez at the intímate tete-a-tete with millionaire socialites at the Ponchartrain afterwards. "Whitey," I sez, "I got some questions fer ya." "Iffy," sez Whitey, "It's been a long time"-he wuz interrupted by his wife Betty who up and put her hand in his pocket right about that moment -"Anything you want, shoot." At that moment, hearing that word, a phalanx of secret service agents swarmed about the presidential personage, and in obvious emulation of the First Lady, they had their hands in each others' pockets too. . . so I made my way back to the Shelby to write this up. If ya ask me, I say Whitey is a perfect president to have in the year 1976, in the historical tradition of Benjamin Harrison, Millard Fillmore, and Calvin Coolidge, and we all oughta be grateful that, even with his injuries, he is serving his country- serving it right up on a silver platter to his buddy Rocky.

Speakin' of the Secret Service, those fellas in their dark goggles paid a little visit to the publishin' offices of the South End, which is put out every day down at the Wayne campus. Seems they were a tad concerned about a contest the paper run which asked the pointed question, "Where will Jerry get it?" Wellsir, if they didn't take the poor editor and the paper's adviser into an office and shut the door. may my whiskers fall out. After throwin' a good scare into everybody, and most likely tellin' 'em not to ever do that again, the feds attempted to slip away unseen. But before they could melt back into the anonymity from which they came, one of Iffy's inconspicuous but ever-present agents snapped the picture here. Must be a better way to make a livin', huh, guys?

Ol' If can understand why you get so worked up, though. It's been a tryin' year for our chief exec, no denyin' it. When he's not gettin' shot at by some riled-up citizen, some member of his immediate family is puttin' him in a compromised position with a chance remark. Why, no sooner had Jerry recovered from wifey's lettin' it slip it might be OK with her if young Susan kicked up her heels a bit, than young Jack came right out and admitted messin' around with hemp. Don't take it so hard, Jerry, he coulda joined the SLA, y'know? Heard it's good for headaches, too, yer honor. Hope Jack brings some extra next time he comes through. Even Iffy's had trouble makin' a score lately. Thought the "dope capital of the Midwest" was supposed to be around here someplace.

Until next time, this is Iffy the Dopester leavin' ya with this thought: What ambitious young Free Press reporters, known in the copy department as "the power whores" have been seen lately in the company of a former defendant in the 10th Precinct Conspiracy Trial? Iffy won't tell.