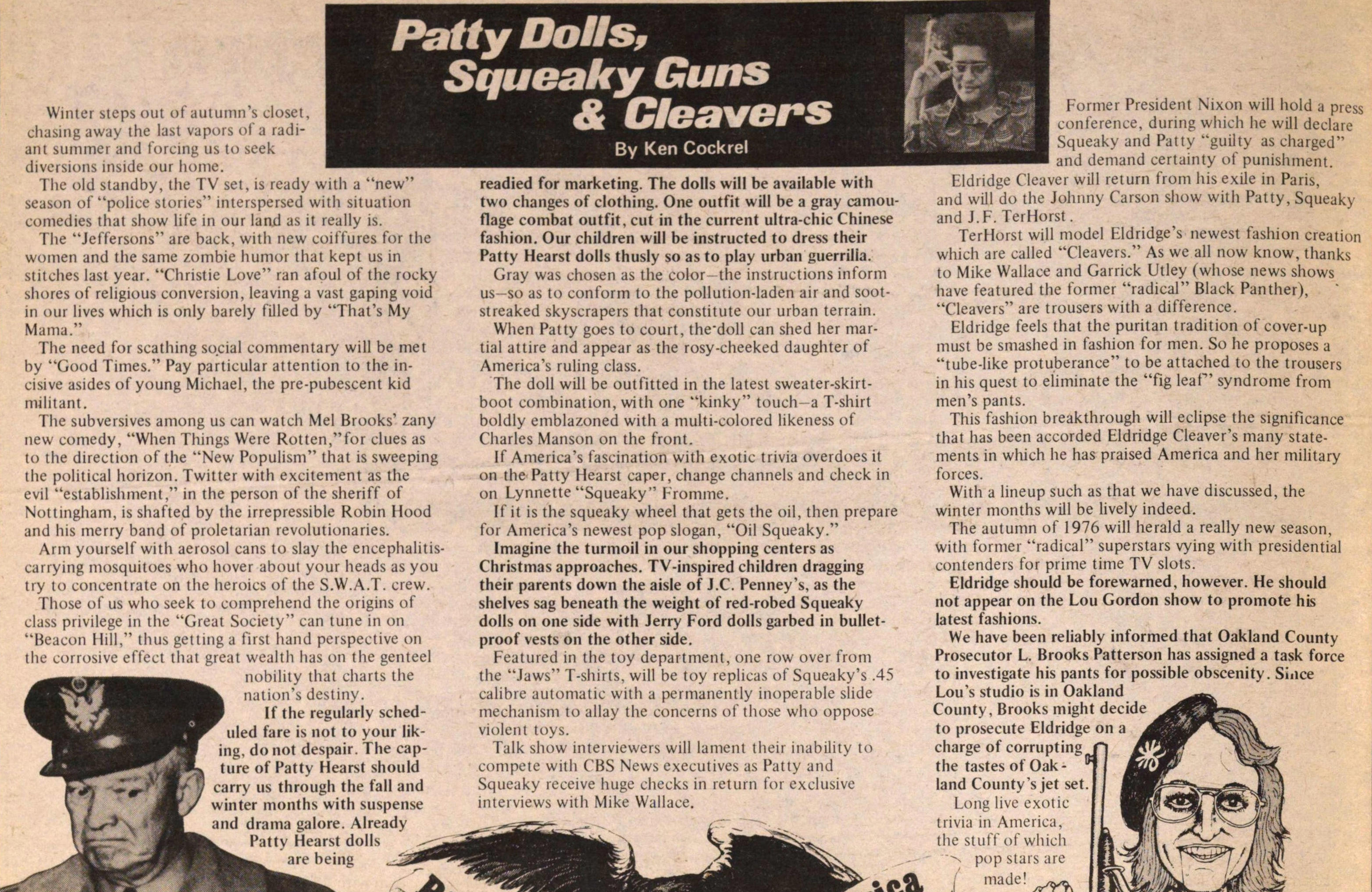 Winter steps out of autumn's closet, chusingaway the last vapors of a radiant summer and forcing us to seek diversions inside our home. The old standby, the TV set, is ready with a "new" season of "pólice stories" interspersed with situation comedies that show life in uur land as it really is. The "Jeffersons" are back, with new coiffures for the women and the same zombie humor that kept us in stitches last year. "Christie Love" ran afoul of the rocky shores of religious conversión, leaving a vast gaping void in our lives which is only barely filled by "That's My Mama." The need for scathing social commentary will be met by "Good Times." Pay particular attention to the incisive asides of young Michael, the pre-pubescent kid militant. The subversives among us can watch Mei Brooks' zany new comedy, "When Things Were Rotten, "for clues as to the direction of the "New Populism" that is sweeping the political horizon. Twitter with excitement as the ovil "establishment," in the person of the sheriff of Nottingham, is shafted by the irrepressible Robin Hood and his merry band of proletarian revolutionaries. Arm yourself with aerosol cans to slay the encephalitiscarrying mosquitoes who liover about your heads as you try to concéntrate on the heroics of the S.W.A.T. crew. Those of us who seek to comprehend the origins of class privilege in the "Great Society" can tune in on "Bcacon llill," thus gettinga first hand perspective on the corrosive effect that great wealth has on the genteel nobility that cliarts the nation's destiny. If the reeularlv uled fare is not to your liking, do not despair. The capture of Fattv Hearst should carry us through the fall and winter months with suspense and drama galore. Already Pattv Hearst dolls are being readied for marketing. The dolls will be available with two changes of clothing. One outfit will be a gray camouflage combat outfit, cut in the current ultra-chic Chinese fashion. Our children will be instructed to dress their Patty Hearst dolls thusly so as to play urban guerrilla. Gray was chosen as the color the instructions inform us- so as to conform to the pollution-laden air and sootstreaked skyscrapers that constitute our urban terrain. When Patty goes to court, the"doll can shed her martial attire and appear as the rosy-cheeked daughter of America 's ruling class. The doll will be outfitted in the latest sweater-skirtboot combination, with one "kinky" touch- a T-shirt boldly emblazoned with a multi-colored likeness of Charles Manson on the front. If America's fascination with exotic trivia overdoes it on the Patty Hearst caper, change channels and check in on Lynnette "Squeaky" Fromme. If it is the squeaky wheel that gets the oil, then prepare for America's newest pop slogan, "Oil Squeaky." Imagine the turmoil in our shopping centers as Christmas approaches. TV-inspired children dragging their parents down the aisle of J.C. Penney 's, as the shelves sag beneath the weight of red-robed Squeaky dolls on one side with Jerry Ford dolls garbed in bulletproof vests on the other side. Featured in the toy department, one row over from the "Jaws" T-shirts, will be toy replicas of Squeaky's .45 calibre automatic with a permanently inoperable slide mechanism to allay the concerns of those who oppose violent toys. Talk show interviewers will lament their inability to compete with ('BS News executives as Patty and Squeaky receive huge checks in return for exclusive interviews with Mike Wallace. Former President Nixon will liold a press conference, during whicli lic wül declare Squeaky and Pat tv "guilty as charged" and demand certainty of punishment. Eldridge Cleaver will return from his exile in Paris, and will do the Johnny Carson show with Patty, Squeaky and J.F. TerHorst . TerHorst will model Eldridge's newest fashion creation which are called "Cleavers." As we all now know, thanks to Mike Wallace and Garrick Utley (whose news shows liave featured the tonner "radical" Black Panther), "Cleavers" are trousers with a difference. Eldridge feels that the puritan tradition ofcover-up must be smashed in fashion for men. So he proposes a "tube-like protuberance" to be attached to the trousers in his quest to elimínate the "fig leaf' syndrome from men's pants. This fashion breakthrough will eclipse the significance that has been accorded Eldridge Cleaver's many statements in which he has praised America and her military forces. With a lineup such as that we have discussed, the winter months will be lively indeed. The autumn of 1976 will herald a really new season, with formar "radical" superstars vying with presidential contenders for prime time TV slots. Eldridge should be forewarned, however. He should not appear on the Lou Gordon show to promote his latest fashions. We have been reliably nformed that Oakland County Prosecutor L. Brooks Patterson has assigned a task forcé to investígate his pants for possible obscenity. Since Lou 's studio is in Oakland .. County, Brooks might decide to prosearte Eldridge on a charge of corrupting j the tastes of Oak - "j land County'sjet set. Long live exotic trivia in America. the stuff of whicli pop stars are made!