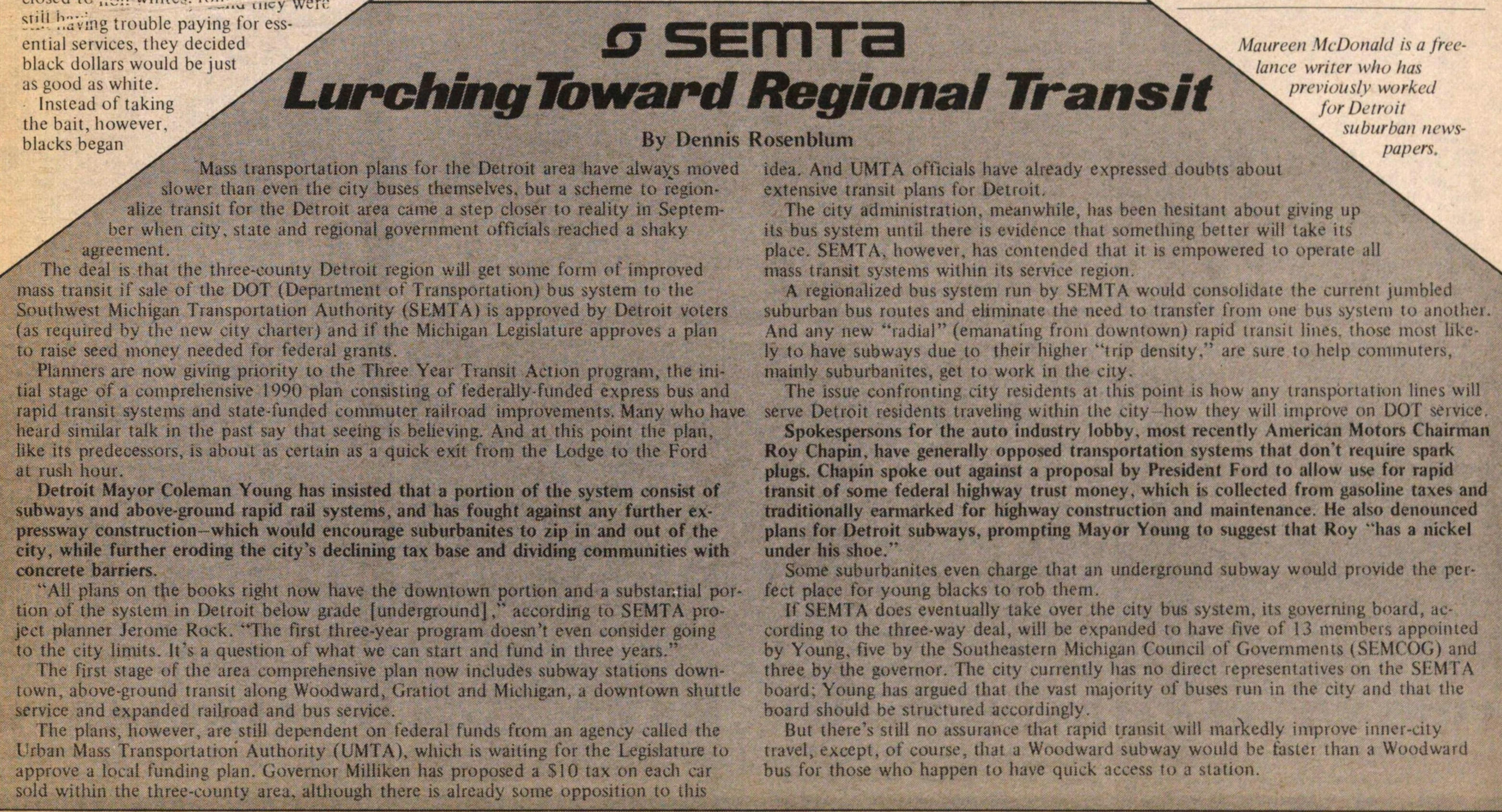 Mass transportation plans For the Detroit área have alwa;s moved s slowcr titan even the city buses themselves. but a sclierne to regiónali.e transit for the Detroit área carne a step closer to reaJity in jr ber when city. state and regional government ufticials reached a shaky y agrecnicnt. S The deal is that the tliree-county Detroit región wil] get sume form of improved mass transit if sale of the DOT (Department of Transportation) bus system to the Southwest Michigan Transportation Auihority (SbMTA) is approyed by Detroit voters (as required by the new city charter) and if the Michigan 1 egislature approves a plan to raise seed money needed f'or federal grants. Planners are now giving priority 10 the Three Year Transit Action program, the initial stage of a comprehensive 1900 plan consisting of federally-funded express bus and rapid transit systejns and state-tuiulcd coninuiter railroad improvements. Many who have heard similar talk ín the past sny that seeing is beiieving. And at this potnt the plan, like its predeeessors, is about as certain as a quick exit from the Lodge to the Ford at rush hour. Detroit Mayor Coleman Young has insisted that a portion of the system consist of subways and above-ground rapid rail systems, and has fought against any further expressway construction- which would encourage suburbanites to ip in and out of the city, while further eroding the city's declining tax base and dividing communities with concrete barriere. "All plans on the books right now have the downtown portion and a suhstantial portion of the sysiem in Detroit below grade (underground] ," according to SEMTA project planner Jerome Rock. "Tiie first three-year program doesn't even consider going to the city limits. It's a question of what we can start and fund in three years." The first stage of the area comprehensive plan now includes subway stations downtown, above-ground transit akng Woodward, Gratiot and Michigan, a downtown shuttle service and expanded railroad and bus service. The plans, lunvever, are sftll dependent on federal ftinds from an agency called the l'rban Maas Transportation Authority (UMTA), which is waiting for the Legislature to approve a local fundine plan. Governor Milliken has proposed a S10 tax on eaeh car sold within the three-county area, aJtliough there is already soiue opposition to this idea. And UMTA officials havo already expressed doubts about exteiisive transit plans fbf Detroit. The city administration. meanwhile, has been hesitant about giving up . its bus system until there is evidtnce that something better wil! take its v placo. SEMTA. tunvevev. has contended that it is empowered to opérate all n mass transit systems within its service región. A regionalied bus systcm run by SEMTA would consolídate the curren) jumblcd suburban bus routes and elimínate the need to transfer from mie luis systcm to another. And any uew "radial" (emanating from downtown) iapid transit lines, those most likciy to have subways due to their higher "trip density." are sure to help commuters, mauily suburbanites, get to work in the city. The issue eonfronting city residents at this point is how any transpbrtatkm lines w i II serve Detroit residents traveling within tle city how ihey will impröve on 1)01 seivice. Spokespersons for the auto industry lobby, most recently American Motors ( liairman Roy Chapín, have generally opposed transportation systems that don't require spark ptugs. Chapín spoke out against a proposal by President Ford to allow use for rapid transit of some federal highway trust money. which h collected from gasoline taes and traditionally eannarked for highway construction and maintenance. He also denounced plans for Detroit subways, prompting Mayor Young to suggest that Roy "has a nickel under his shoe." Some suburbanites even charge that an underground subway would piovide the perfect place for young blacks to rob ihem. ft StMTA does eventually take over the city luis gystem, its governlng board, aucording to the three-way deal, will be expunded to have five of 13 members appointed by Young, five by the Southeastern Michigan Council of Govcmments (SEMCOG) and three by the governof. The city currently has no direct representatives on the SEMTA board: Young has argued that the vast majority of buses run in the city and that the board should be structured accofdingly. But ihere's still 110 assuraiue thai rapid transit will rnarkedly improve innei-cily travel, except, of course, that a Woodward subway would be tasto than a Woodward bus for those who happen to have quick access to a station.