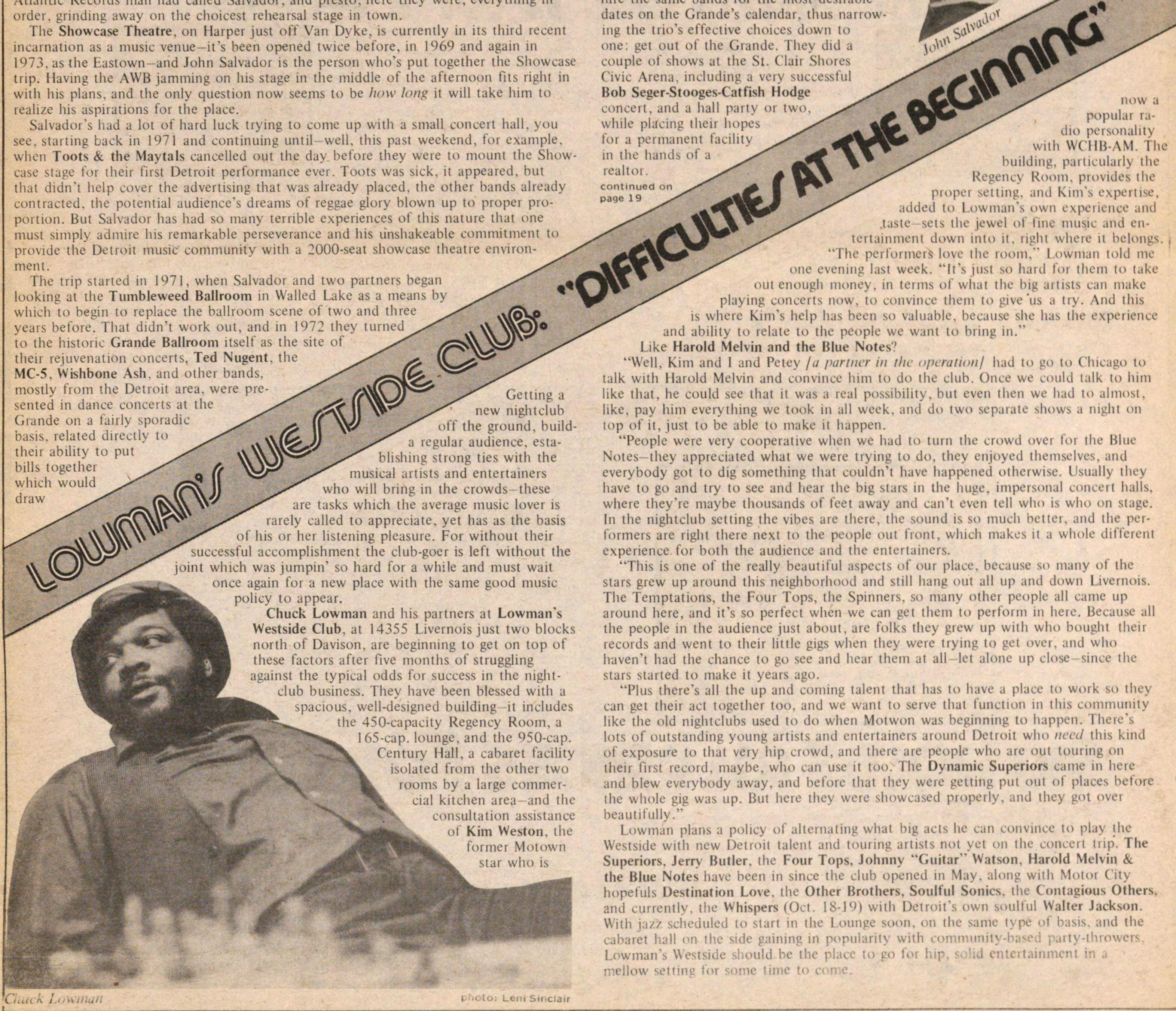 Getting a new nightclub off the ground, building a regular audience, establishing strong ties with the musical artists and entertainers who will bring in the crowds - these are tasks which the average music lover is rarely called to appreciate, yet has as the basis of his or her listening pleasure. For without their successful accomplishment the dub-goer is left without the joint which was jumpin' so hard for a while and must wait once again for a new place with the same good music policy to appear. Chuck Lowman and his partners at Lowman's Westside Club, at 14355 Livernois just two blocks north of Davison, are beginning to get on top of these factors after five months of struggling against the typical odds for success in the club business. They have been blessed with a spacious, well-designed building- it includes the 450-capacity Regency Room, a 165-cap. lounge, and the 950-cap. Century Hall, a cabaret facility isolated trom the other two rooms by a large commercial kitchen area-and the consultation assistance of Kim Weston, the former Motown star who is now a popular radio personality with WCHB-AM. The building, particularly the Regency Room. provides the proper setting, and Kim's expertise, added to Lowman's own experience and taste - sets the jewel of fine music and entertainment down into it, right where it belongs."The performers love the room," Lowman told me one evening last week. "It's just so hard for them to take out enough money, in terms of what the big artists can make playing concerts now, to convince them to give us a try. And this is where Kim's help has been so valuable, because she has the experience and ability to relate to the people we want to bring in."
Like Harold Melvin and the Blue Notes?
"Well, Kim and I and Petey (a partner in the operation) had to go to Chicago to talk with Harold Melvin and convince him to do the club. Once we could talk to him like that, he could see that it was a real possibility, but even then we had to almost, like, pay him everything we took in all week, and do two separate shows a night on top of it, just to be able to make it happen. "People were very cooperative when we had to turn the crowd over for the Blue Notes- they appreciated what we were trying to do, they enjoyed themselves, and everybody got to dig something that couldn't have happened otherwise. Usually they have to go and try to see and hear the big stars in the huge, impersonal concert halls, where they're maybe thousands of feet away and can't even tell who is who on stage. In the nightclub setting the vibes are there, the sound is so much better, and the performers are right there next to the people out front, which makes it a whole different experience for both the audience and the entertainers. "This is one of the really beautiful aspects of our place, because so many of the stars grew up around this neighborhood and still hang out all up and down Livernois. The Temptations, the Four Tops, the Spinners, so many other people all came up around here, and it's so perfect when we can get them to perform in here. Because all the people in the audience just about, are folks they grew up with who bought their records and went to their little gigs when they were trying to get over, and who haven't had the chance to go see and hear them at all - let alone up close- since the stars started to make it years ago.
"Plus there's all the up and coming talent that has to have a place to work so they can get their act together too, and we want to serve that function in this community like the old nightclubs used to do when Motown was beginning to happen. There's Iots of outstanding young artists and entertainers around Detroit who need this kind of exposure to that very hip crowd, and there are people who are out touring on their first record, maybe, who can use it too. The Dynamic Superiors came in here and blew everybody away, and before that they were getting put out of places before the whole gig was up. But here they were showcased properly, and they got over beautifully." Lowman plans a policy of alternating what big act he can convince to play the Westside with new Detroit talent and touring artists not yet on the concert trip. The Superiors, Jerry Butler, the Four Tops, Johnny "Guitar" Watson, Harold Melvin & the Blue Notes have been in since the club opened in May, along with Motor City hopefuls Destination Love, the Other Brothers, Soulful Sonics, the Contagious Others, and currently, the Whispers (Oct. 18-19) with Detroit's own soulful Walter Jackson. With jazz scheduled to start in the Lounge soon, on the same type of basis, and the cabaret hall on the side gaining in popularity with community-based party-throwers, Lowman's Westside should be the place to go for hip solid entertainment in a mellow setting for some time to come.