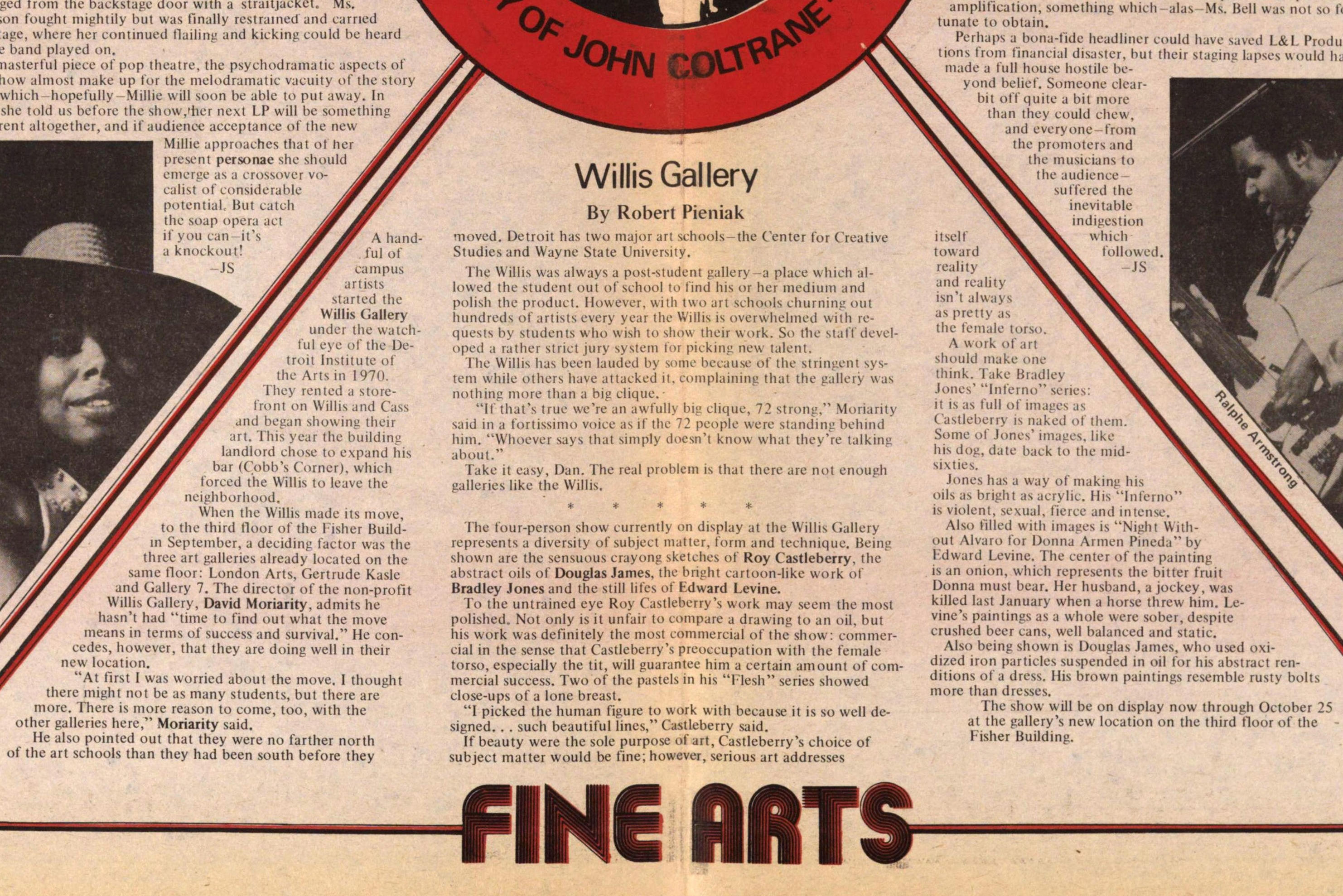 A handful of campus artists started the Willis Gallery under  the watchful eye of Detroit Instituto of the Arts in 1970. They rented a store front on Willis and Cass and began showing their art. This year the building landlord chose to expand his bar (Cobb's Corner), which forced the Willis to leave the neighborhood.

When the Willis made its move, to the third floor ot the Fisher Building in September, a deciding factor was the three art galleries already located on the same floor: London Arts, Gertrude Kasle and Gallery 7. The director of the non-profit Willis Gallery, David Moriarity, admits he hadn't  had "time to find out what the move means in terms of success and survival. He concedes, however, that they are doing well in their new location.

At first I was worried about the move. I thought there might not be as many students, but there are more. There is more reason to come, too, with the other galleries here," Moriarity said.

He also pointed out that they were no farther north of the art schools than they had been south before they moved. Detroit has two major art schools- the Center for Creative Studies and Wayne State University.

The Willis was always a post-student gallery - a place which allowed the student out of school to find his or hers medium and polish the product. However, with Iwo art schools churning out hundreds of artists every year the Willis is overwhelmed with requests by students who wish to show their Work, So the staff developed a rather strict jury system for picking new talent.

The Willis has been lauded by some because of the stringent system while others have attacked it. complaining that the gallery was nothing more than a big clique.

"If that's true we're an awfully big clique, 72 strong," Moriarity said in a fortissimo voice as if' the 72 people were standing behind him. "Whoever says that simply doesn't know what they're talking about."

Take it easy, Dan. The real problem is that there are not enough galleries like the Willis.

The four-person show currently on display at the Willis Gallery represents a diversity of subject matter, form and technique, Being shown are the sensuous crayon sketches of Roy Castleberry, the abstract oils of Douglas James, the bright cartoon-like work of Bradley Jones and the still lifts of Edward Levine.

To the untrained eye Roy Castleberry 's work may seem the most polished. Not only is it unfair to compare a drawing to an oil, but his work was definitely the most commercial of the show : commercial in the sense that Castleberry's preoccupation with the female torso, especially the tit, will guarantee him a certain amount of commercial success. Two of the pastels in his "flesh" series showed close-ups of a lone breast.

"I picked the human figure to work with because it is so well designed. . . such beautiful lines," Castleberry said. If beauty were the sole purpose of art, Castleberry's choice of subject matter would be fine; however, serious art addresses itself  toward reality and reality isn't always as pretty as the female torso.

A work of art should make one think. Take Bradley Jones' "Inferno" series: it is as full of images as  Castleberiy is naked of them. Some of Jones' images, like his dog, date back to the mid-sixties.

Jones has a way of making his oils as bright as acrylic. His "Inferno" is violent, sexual, fierce and intense.

Also filled with images is "Night without Alvaro for Donna Armen Pineda" by Edward Levine. The center of the painting is an onion, which represent; the bitter fruit Donna must bear. Her husband, a jockey, was killed last January when a horse threw him. Levine's paintings as a whole were sober, despite k crushed beer cans, well balanced and static.

Also being shown is Douglas James, who used oxidized iron particles suspended in oil for his abstract renditions of a dress. His brown paintings resemble rusty bolts more than dresses.

The show will be on display now through October 25 at the gallery's new location on the third floor of the Fisher Building.