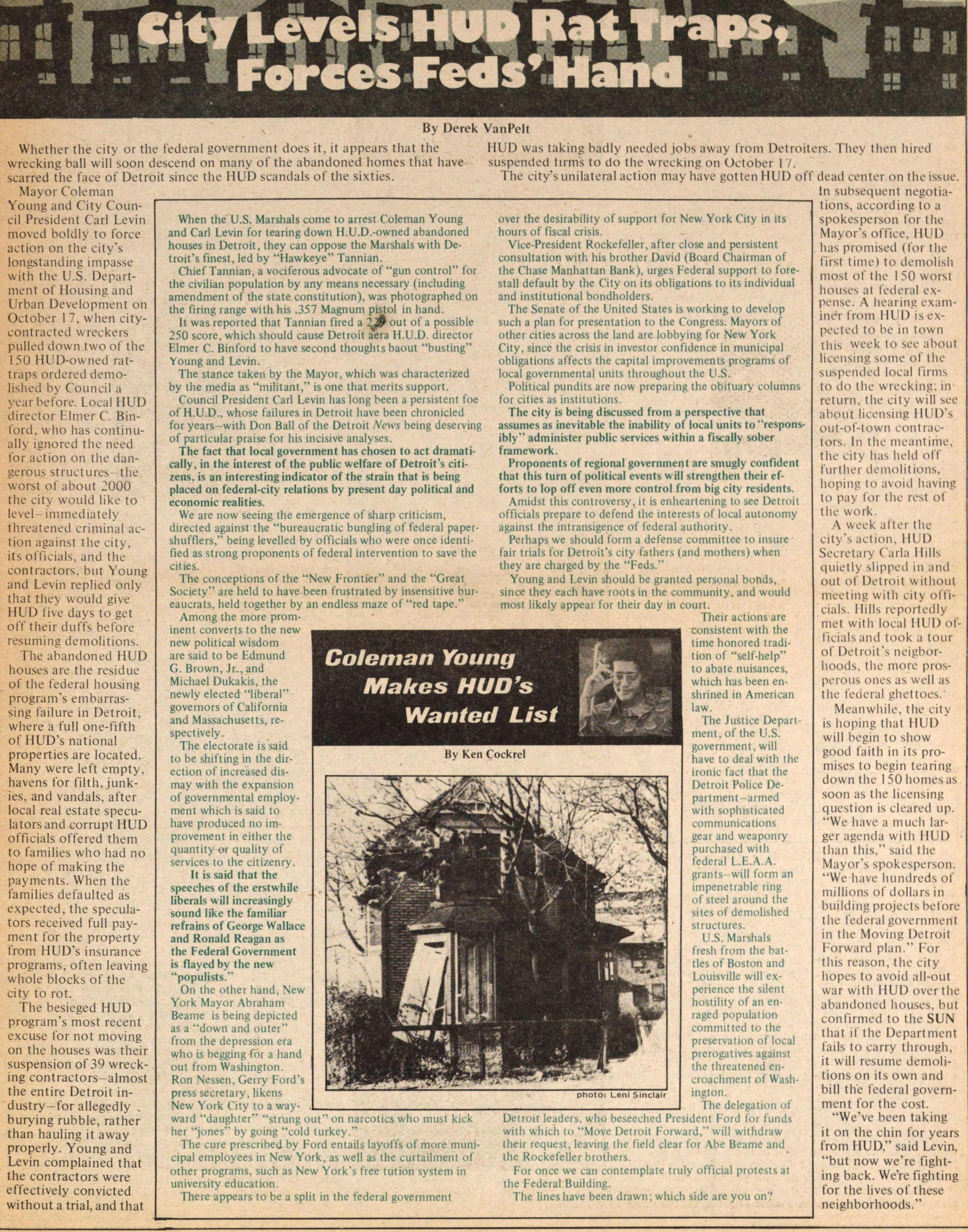 Whether the city or the federal government does it, it appears that the wrecking hall will soon descend on many of the abandoned homes that have scarred the face of Detroit since the HUD scandals of the sixties.

Mayor Coleman Young and City Council President Carl Levin moved boldly to force action on the city's longstanding impasse with the U.S. Department of Housing and Urban Development on October 17. when city contracted wreckers pulled down two of the 150 HUD-owned rattraps ordered demolished by Council a year before. Local HUD director Elmer C. Binford, who has continually ignored the need for action on the dangerous structures the worst of about 2000 the city would like to level immediately threatened criminal action against the city, its officials, and the contractors. but Young and Levin replied only that they would give HUD five days to get off their duffs before resuming demolitions.

The abandoned HUD houses are the residue of the federal housing program's embarrassing failure in Detroit, where a full one-fifth of HUD's national properties are located. Many were left empty, havens for filth, junkies, and vandals. after local real estate speculators and corrupt HUD officials offered them to families who had no hope of making the payments. When the families defaulted as expected, the speculators received full payment for the property from HUD's insurance programs, often leaving whole blocks of the city to rot.

The besieged HUD program's most recent excuse for not moving on the houses was their suspension of 39 wrecking contractors-almost the entire Detroit industry-for allegedly burying rubble, rather than hauling it away properly. Young and Levin complained that the contractors were effectively convicted without a trial, and that HUD was taking badly needed jobs away from Detroiters. They then hired suspended firms to do the wrecking on October 17.

The city's unilateral action may have gotten HUI) off dead center on the issue. In subsequent negotiations, according to a spokesperson for the Mayor's office, HUD has promised (for the first time) to demolish most of the 1 50 worst houses at federal expense. A hearing examiner from HUD is expected to be in town this week to see about licensing some of the suspended local firms to do the wrecking; in return, the city will see about licensing HUD's out-of-town contractors. In the mean time, the city has held off further demolitions, hoping to avoid having to pay for the rest of the work.

A week alter the city's action, HUD Secretary Carla Hills quietly slipped in and out of Detroit without meeting with city officials. Hills reportedly met with local HUD officials and took a tour of Detroit's neigborhoods, the more prosperous ones as well as the federal ghettoes.

Meanwhile, the city is hoping that HUD will begin to show good faith in its promises to begin tearing down the 150 homes as soon as the licensing question is cleared up.

"We have a much larger agenda with HUD than this," said the Mayor's spokesperson. "We have hundreds of millions of dollars in building projects before the federal government in the Moving Detroit Forward plan." For this reason, the city hopes to avoid all-out war with HUD over the abandoned houses, but confirmed to the SUN that if the Department fails to carry through, it will resume demolitions on its own and bill the federal government for the cost.

"We've been taking it on the chin for years from HUD," said Levin, "but now we're fighting back. We're fighting for the lives of these neighborhoods."