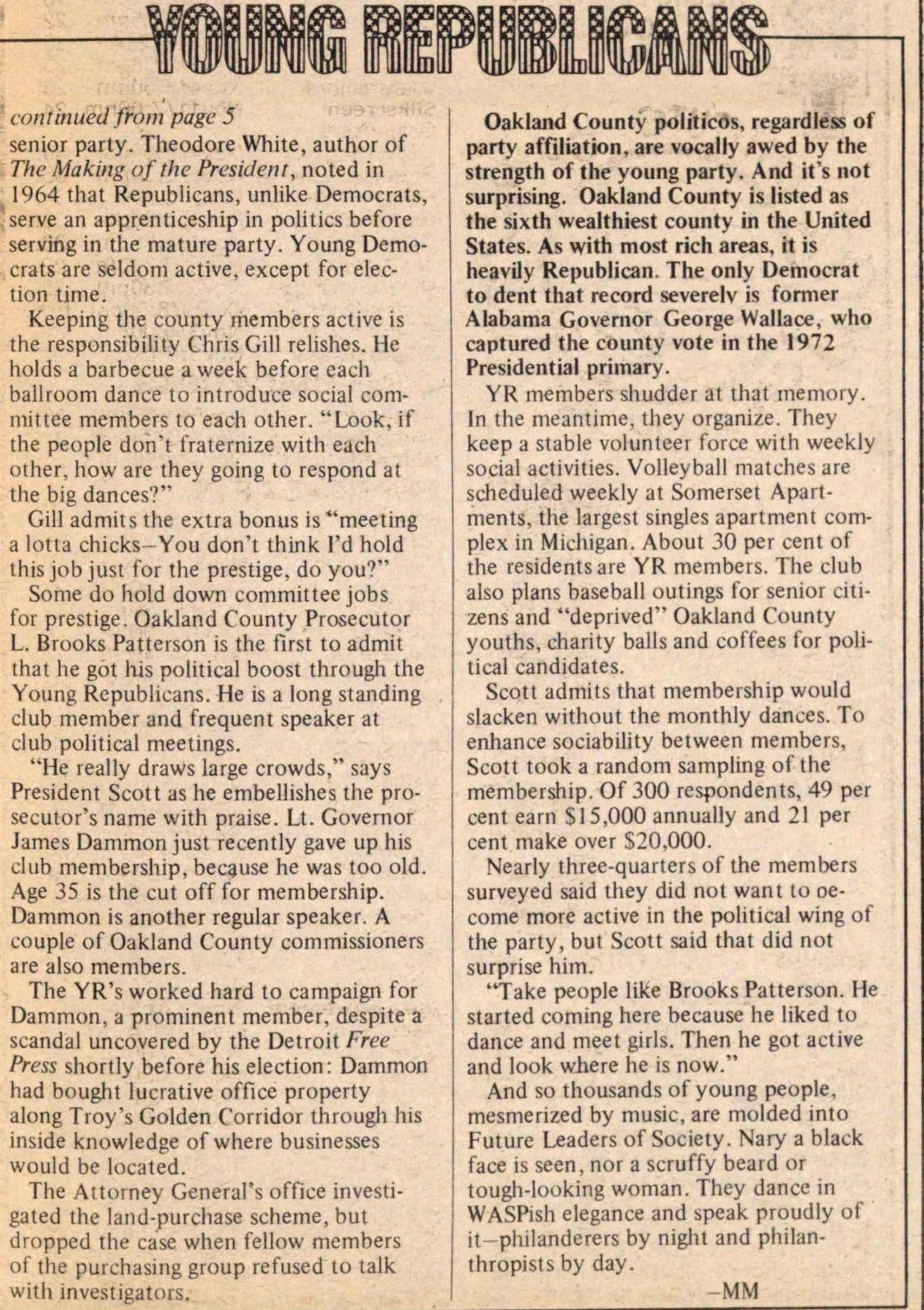 Shades of a Jay Gatsby party are re-enacted monthly at plush hotel ballrooms throughout Oakland County when the well-heeled, well-dressed members of the Oakland County Young Republicans "party down."

Sporting bright-colored mod attire and even brighter smiles, the corporate singles mingle with the like. Some hope to find a spouse, others look for an evening's interlude, while all give their share to the young Grand Old Party.

The guest roster swells to 1,000 by 11 pm. The tempo is hot. The pace is near frantic as unattached wanderers search for companions. Couples cavort on the dance floor, seldom sweating, simply swaying to bands specializing in "mellow Muzak."

The Young Republicans (YR's) draw singles from points west of Ann Arbor, east of Mount Clemens, and all points in between. More than 3,000 Michigan singles count themselves as members of the group.

Why? The dealing is discreet and the dancing is cheap, say most attendants. Former YR Vice-President Ken Holyoke says, "Let's just say there's a nicer class of people here than you'd meet at a bar."

Last year the club contributed more than $I0.000 to Republican candidates and to the senior party coffer and an equal amount to local charities. Last November the club rented the Troy Hilton ballroom as an ill-fated victory room tor arch-conservative Robert J. Huber. He lost his congressional seat that night to newcomer James Blanchard, a Democrat.

At the June general meeting of the YR's, House Minority Leader Denny Cawthorne (R-Manistee) lavished a half-hour's worth of praise on club members and asked them to continue donating funds lo the senior party.

"He almost got down on his knees and begged for money,"said Ron Williams, a club member. "Close to election time we get a steady parade of candidates coming to us to solicit funds can yon imagine that?"

Oakland County delegates to the national convention of the Young Republicans nearly floored their comrades. Holyoke, a delegate,  said other clubs were astounded at the financial success of the Oakland club. He said all other clubs exist on funds from the senior party. "They cant believe we raise so much money off our dances that we help support the senior party," Holyoke said.

Throughout the country, the major function of YR's is to groom members for the senior party. Theodore White, author of The Making of the President, noted in 1964 that Republicans, unlike Democrats, serve an apprenticeship in politics before serving in the mature party. Young Democrats are seldom  active, except for election time.

Keeping the county members active is the responsibility Chris Gill relishes. He holds a barbecue a week before each ballroom dance to introduce social committee members to each other. "Look, if the people don't fraternize with each other, how are they going to respond at the big dances?"

Gill admits the extra bonus is "meeting a lotta chicks---You don't think I'd hold this job just for the prestige, do you?" Some do hold down committee jobs for prestige. Oakland County Prosecutor L. Brooks Patterson is the first to admit that he got his political boost through the Young Republicans. He is a long standing club member and frequent speaker at club political meetings.

"He really draws large crowds," says President Scott as he embellishes the prosecutor's name with praise. Lt. Governor James Dammon just recently gave up his club membership, because he was too old. Age 35 is the cut off for membership. Dammon is another regular speaker. A couple of Oakland County commissioners are also members.

The YR's worked hard to campaign for Dammon, a prominent member, despite a scandal uncovered by the Detroit Free Press shortly before his election: Dammon had bought lucrative office property along Troy's Golden Corridor through his inside knowledge of where businesses would be located.

The Attorney General's office investigated the land-purchase scheme, but dropped the case when fellow members of the purchasing group refused to talk with investigators.

Oakland County politicos, regard less of party affiliation, are vocally awed by the strength of the young party. And it's not surprising. Oakland County is listed as the sixth wealthiest county in the United States. As with most rich areas, it is heavily Republican. The only Democrat to dent that record severely is former Alabama Governor George Wallace, who captured the county vote in the 1972 Presidential primary.

YR members shudder at that memory. In the meantime. they organize. They keep a stable volunteer force with weekly social activities. Volleyball matches are scheduled weekly at Somerset Apartments, the largest singles apartment complex in Michigan. About 30 per cent of the residents are YR members. The club also plans baseball outings for senior citizens and "deprived" Oakland County youths, charity balls and coffees for political candidates.

Scott admits that membership would slacken without the monthly dances. To enhance sociability between members, Scott took a random sampling of the membership. Of 300 respondents, 49 per cent earn $I5,000 annually and 21 per cent make over $20,000.

Nearly three-quarters of the members surveyed said they did not want to become more active in the political wing of the party, but Scott said that did not surprise him.

"Take people like Brooks Patterson. He started coming here because he liked to dance and meet girls. Then he got active and look where he is now."

And so thousands of young people, mesmerized by music, are molded into Future Leaders of Society. Nary a black face is seen, nor a scruffy beard or tough-looking woman. They dance in WASPish elegance and speak proudly of it-philanderers by night and philanthropists by day.