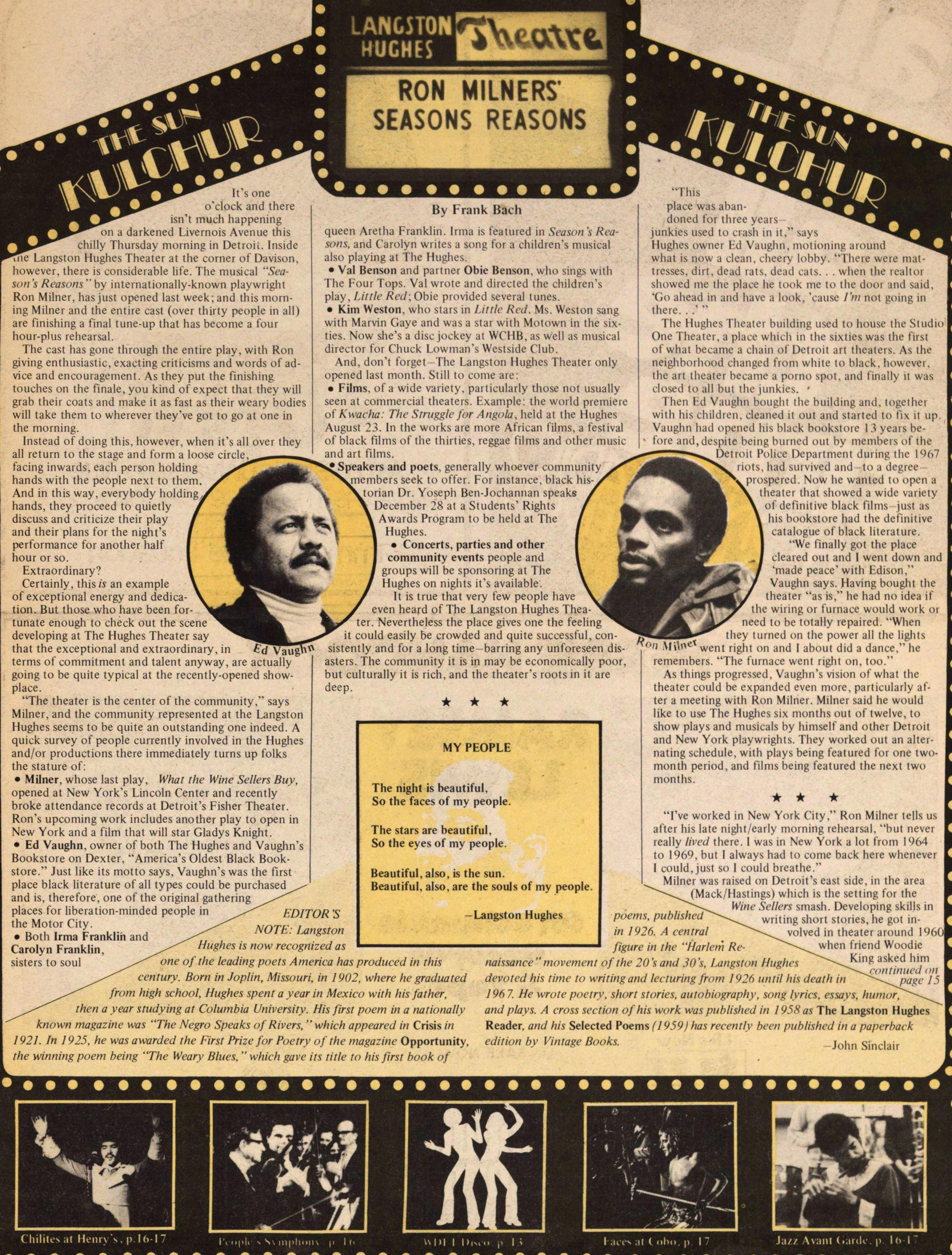 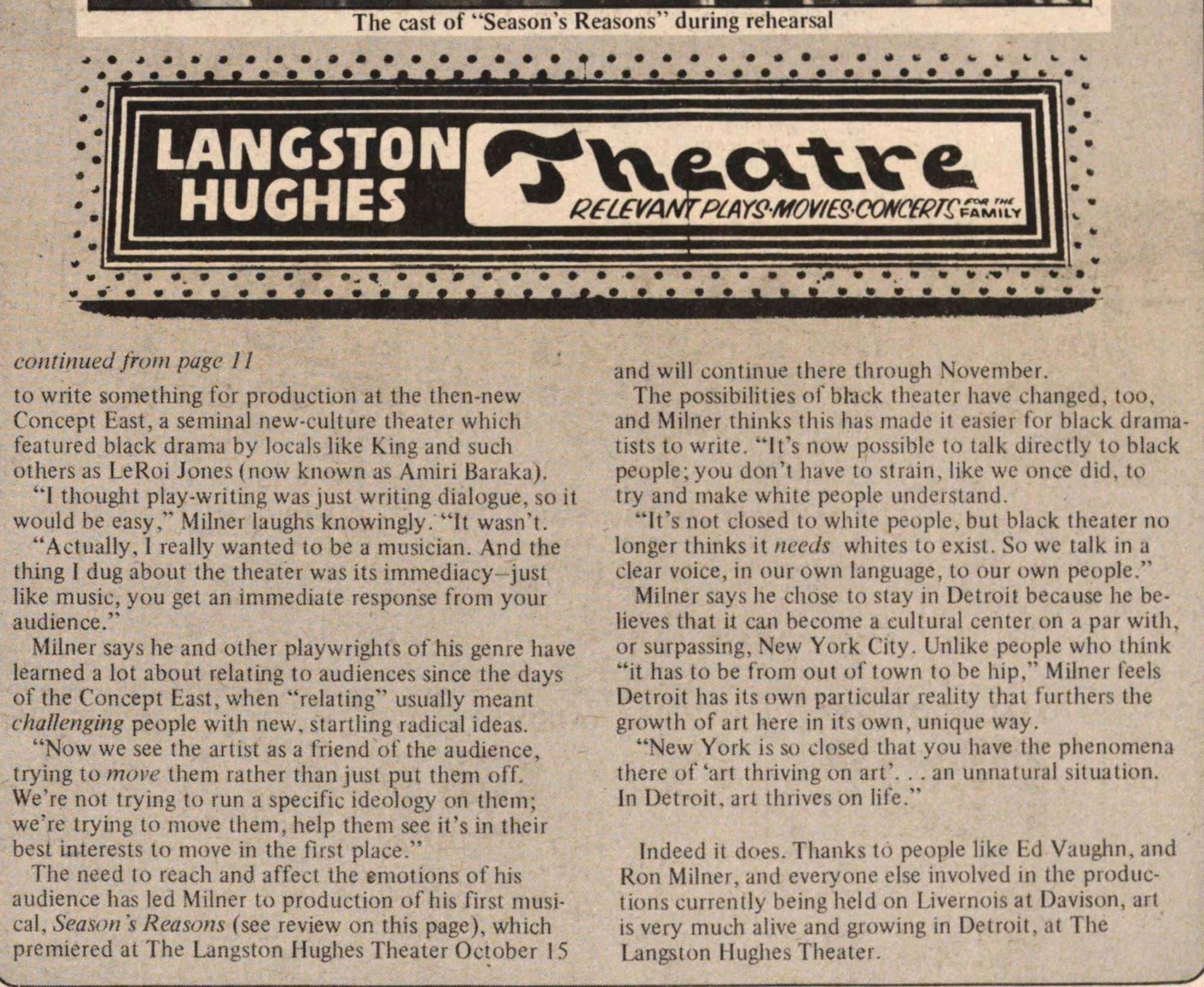 It’s one o’clock and there isn’t much happening on a darkened Livernois Avenue this chilly Thursday morning in Detroit. Inside Langston Hughes Theater at the corner of Davison, however, there is considerable life. The musical “Season’s Reasons” by internationally-known playwright Ron Milner, has just opened last week; and this morning Milner and the entire cast (over thirty people in all) are finishing a final tune-up that has become a four hour-plus rehearsal.

The cast has gone through the entire play, with Ron giving enthusiastic, exacting criticisms and words of advice and encouragement. As they put the finishing touches on the finale, you kind of expect that they will grab their coats and make it as fast as their weary bodies will take them to wherever they’ve got to go at one in the morning.

Instead of doing this, however, when it’s all over they all return to the stage and form a loose circle, facing inwards, each person holding hands with the people next to them. And in this way, everybody holding, hands, they proceed to quietly discuss and criticize their play and their plans for the night’s performance for another half hour or so.

Certainly, this is an example of exceptional energy and dedication. But those who have been fortunate enough to check out the scene developing at The Hughes Theater say that the exceptional and extraordinary, in terms of commitment and talent anyway, are actually going to be quite typical at the recently-opened showplace.

“The theater is the center of the community,” says Milner, and the community represented at the Langston Hughes seems to be quite an outstanding one indeed. A quick survey of people currently involved in the Hughes and/or productions there immediately turns up folks the stature of:

* Milner, whose last play, What the Wine Sellers Buy, opened at New York’s Lincoln Center and recently broke attendance records at Detroit’s Fisher Theater. Ron’s upcoming work includes another play to open in New York and a film that will star Gladys Knight.

* Ed Vaughn, owner of both The Hughes and Vaughn’s Bookstore on Dexter, “America’s Oldest Black Bookstore.” Just like its motto says, Vaughn’s was the first place black literature of all types could be purchased and is, therefore, one of the original gathering places for liberation-minded people in the Motor City.

* Both Irma Franklin and Carolyn Franklin, sisters to soul queen Aretha Franklin. Irma is featured in Season’s Reasons, and Carolyn writes a song for a children’s musical also playing at The Hughes.

* Kim Weston, who stars in Little Red. Ms. Weston sang with Marvin Gaye and was a star with Motown in the sixties. Now she’s a disc jockey at WCHB, as well as musical director for Chuck Lowman’s Westside Club.

And, don’t forget – The Langston Hughes Theater only opened last month. Still to come are:

* Films, of a wide variety, particularly those not usually seen at commercial theaters. Example: the world premiere of Kwacha: The Struggle for Angola, held at the Hughes August 23. In the works are more African films, a festival of black films of the thirties, reggae films and other music and art films.

* Speakers and poets, generally whoever community members seek to offer. For instance, black historian Dr. Yoseph Ben-Jochannan speaks December 28 at a Students’ Rights Awards Program to be held at The Hughes.

* Concerts, parties and other community events people and groups will be sponsoring at The Hughes on nights it’s available.

It is true that very few people have even heard of the Langston Hughes Theater. Nevertheless the place gives one the feeling it could easily be crowded and quite successful, consistently and for a long time-barring any unforeseen disasters. The community it is in may be economically poor, but culturally it is rich, and the theater’s roots in it are deep.

“This place was abandoned tor three years – junkies used to crash in it.” says Hughes owner Ed Vaughn, motioning around what is now a clean, cheery lobby. “There were mattresses, dirt, dead rats, dead cats. . . when the realtor showed me the place he took me to the door and said, ‘Go ahead in and have a look, ’cause l’m not going in there. . .’”

Then Ed Vaughn bought the building and, together with his children, cleaned it out and started to fix it up. Vaughn had opened his black bookstore 13 years before and, despite being burned out by members of the Detroit Police Department during the 1967 riots, had survived and – to a degree – prospered. Now he wanted to open a theater that showed a wide variety of definitive black films – just as his bookstore had the definitive catalogue of black literature.

“We finally got the place I cleared out and I went down and ‘made peace’ with Edison.” Vaughn says. Having bought the theater “as is,” he had no idea if the wiring or furnace would work or need to be totally repaired. “When they turned! on the power all the lights went right on and I about did a dance.” he remembers. “The furnace went right on, too.”

As things progressed, Vaughn’s vision of what the theater could be expanded even more, particularly after a meeting with Ron Milner. Milner said he would like to use The Hughes six months out of twelve, to show plays and musicals by himself and other Detroit and New York playwrights. They worked out an alternating schedule, with plays being featured for one two-month period, and films being featured the next two months.

“I’ve worked in New York City,” Ron Milner tells us after his late night/early morning rehearsal, “but never really lived there. I was in New York a lot from 1964 to 1969, but I always had to come back here whenever I could, just so I could breathe.”

Milner was raised on Detroit’s east side, in the area (Mack/Hastings) which is the setting for the Wine Sellers smash. Developing skills in writing short stories, he got involved in theater around 1960 when friend Woodie King asked him

The night is beautiful,
So the faces of my people.

The stars are beautiful,
So the eyes of my people.

EDITOR’­S NOTE: Langston Hughes is now recognized as one of the leading poets America has produces in this century. Born in Joplin, Missouri, in 1902, where he graduated from high school, Hughes spent a year in Mexico with his father, then a year studying at Columbia University. His first poem in a nationally known magazine was “The Negro Speaks of Rivers,” which appeared in Crisis in 1921. In 1925, he was awarded the First Prize for Poetry of the magazine Opportunity, the winning poem being “The Weary Blues,” which gave its title to his first book of poems, published in 1926. A central figure in the “Harlem Renaissance” movement of the 20’s and 30’s, Langston Hughes devoted his time to writing and lecturing from 1926 until his death in 1967. He wrote poetry, short stories, autobiography, song lyrics, essays, humor, and plays. A cross section of his work was published in 1958 as The Langston Hughes Reader, and his Selected Poems (1959) has recently been published in a paperback edition by Vintage Books.

to write something for production at the then-new Concept East, a seminal new-culture theater which featured black drama by locals like King and such others as LeRoi Jones (now known as Amiri Baraka).

“I thought play-writing was just writing dialogue, so it would be easy,” Milner laughs knowingly. “It wasn’t.

“Actually, I really wanted to be a musician. And the thing I dug about the theater was its immediacy – just like music, you get an immediate response from your audience.”

Milner says he and other playwrights of his genre have learned a lot about relating to audiences since the days of the Concept East, when “relating” usually meant challenging people with new, startling radical ideas.

“Now we see the artist as a friend of the audience, trying to move them rather than just put them off. We’re not trying to run a specific ideology on them; we’re trying to move them, help them see it’s in their best interests to move in the first place.”

The need to reach and affect the emotions of his audience has led Milner to production of his first musical, Season’s Reasons (see review on this page), which premiered at The Langston Hughes Theater October 15 and will continue there through November.

The possibilities of black theater have changed, too, and Milner thinks this has made it easier for black dramatists to write. “It’s now possible to talk directly to black people; you don’t have to strain, like we once did, to try and make white people understand.

“It’s not closed to white people, but black theater no longer thinks it needs whites to exist. So we talk in a clear voice, in our own language, to our own people.”

Milner says he chose to stay in Detroit because he believes that it can become a cultural center on a par with, or surpassing, New York City. Unlike people who think “it has to be from out of town to be hip,” Milner feels Detroit has it’s own particular reality that furthers the growth of art here in its own, unique way.

“New York is so closed that you have the phenomena there of ‘art thriving on art’. . . an unnatural situation. In Detroit, art thrives on life.”

Indeed it does. Thanks to people like Ed Vaughn, and Ron Milner, and everyone else involved in the productions currently being held on Livernois at Davison, art is very much alive and growing in Detroit, at The Langston Hughes Theater.