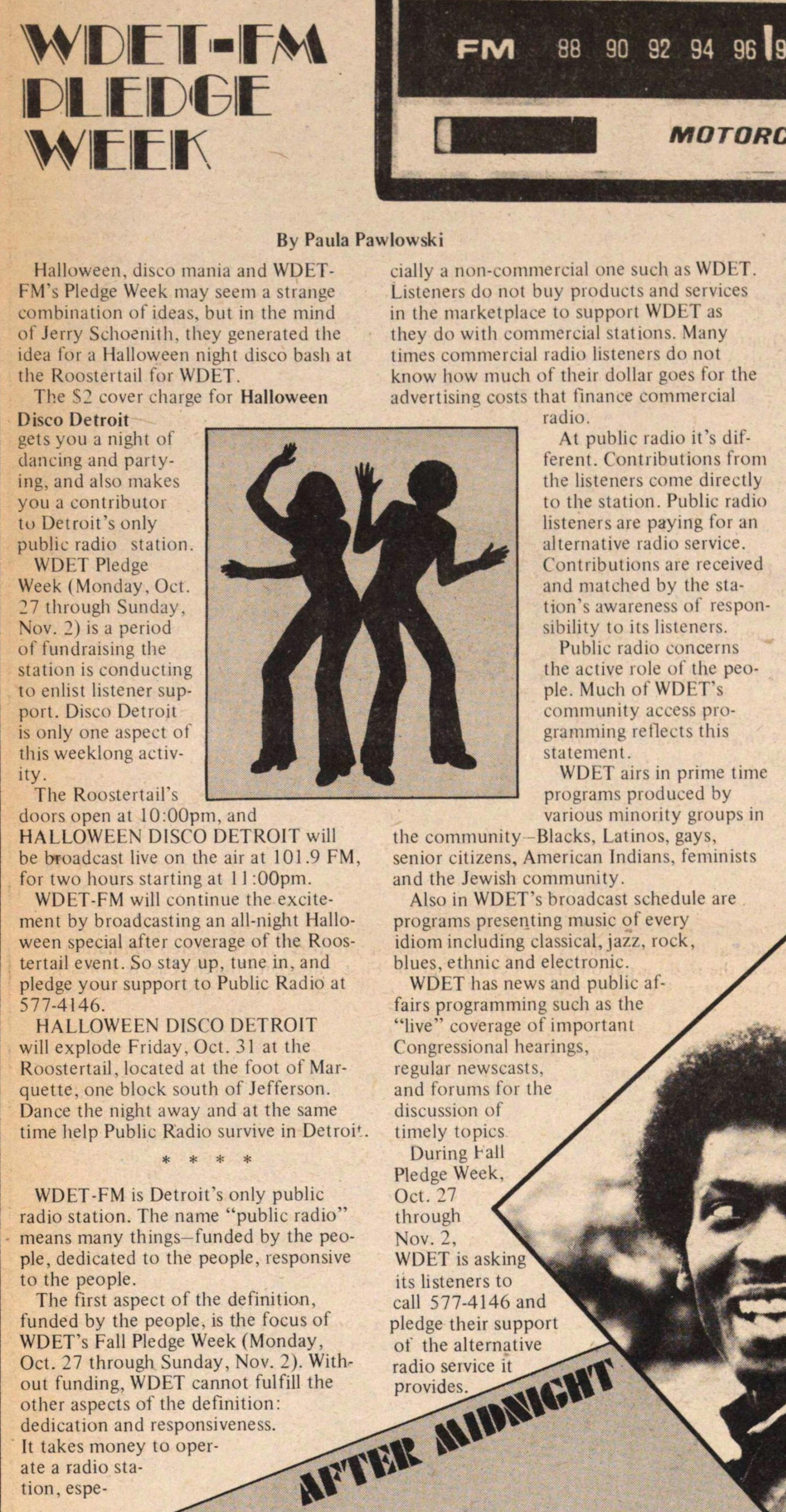 Halloween, disco mania and WDET-FM's Pledge Week may seem a strange combination of ideas, but in the mind of Jerry Schoenith, they generated the idea for a Halloween night disco bash at the Roostertail for WDET.

The $2 cover charge for Halloween Disco Detroit gets you a night of dancing and partying, and also makes you a contributor to Detroit's only public radio station.

WDET Pledge Week (Monday. Oct. 27 through Sunday, Nov. 2) is a period of fundraising the station is conducting to enlist listener support.  Disco Detroit is only one aspect of this week long activity.

The Roostertail's doors open at 10:00pm, and HALLOWEEN DISCO DETROIT will be broadcast live on the air at 101.9 FM, for two hours starting at 11:00pm.  WDET-FM will continue the excitement by broadcasting an all-night Halloween special after coverage of the Roostertail event.  So stay up, tune in, and pledge your support to Public Radio at 577-4146.

HALLOWEEN DISCO DETROIT will explode Friday. Oct. 31 at the Roostertail, located at the foot of Marquette, one block south of Jefferson.  Dance the night away and at the same time help Public Radio survive in Detroit.

The first aspect of the definition, funded by the people, is the focus of WDET's Fall Pledge Week (Monday, Oct. 27 through Sunday, Nov. 2).  Without funding, WDET cannot fulfill the other aspects of the definition:  dedication and responsiveness.  It takes money to operate a radio station, especially a non-commercial one such as WDET.  Listeners do not buy products and services in the market place to support WDET as they do with commercial stations.  Many times commercial radio listeners do not know how much of their dollar goes for the advertising costs that finance commercial radio.

Public radio concerns the active role of the people.  Much of WDET's community access programming reflects this statement.

Also in WDET's broadcast schedule are programs presenting music of every idiom including classical, jazz, rock, blues, ethnic and electronic.

WDET has news and public affairs programming such as the "live" coverage of important Congressional hearings, regular newscasts, and Forums for the discussion of timely topics.

During fall Pledge Week, Oct. 27 through Nov. 2, WDET is asking its listeners to call 577-4146 and pledge their support of the alternative radio service it provides.