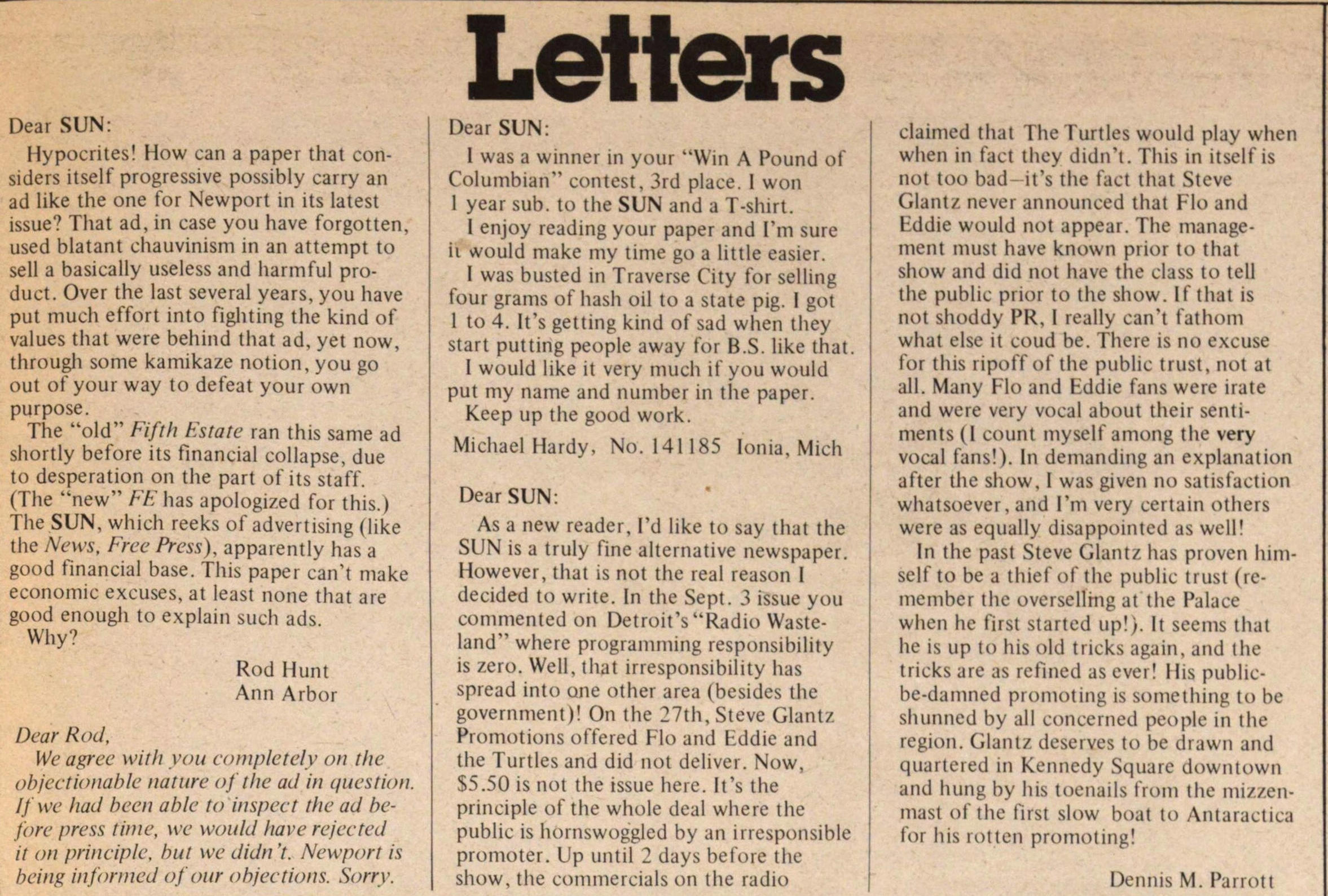 Dear SUN: Hypocrites! How can a paper that considers itself progressive possibly carry an ad like the one for Newport in its latest issue? That ad, in case you have forgotten, used blatant chauvinism in an attempt to sell a basically useless and harmful product. Over the last several years, you have put mucli effort into figliting the kind of values that were behind that ad, yet now, through some kamikaze notion, you go out of your way to defeat your own purpose. The "oíd" Fifth Estáte ran this same ad shortly before its financial collapse, due to desperation on the part of its staff. (The "new" FE has apologized for this.) The SUN, which reeks of advertising (like the News, Free Press), apparently has a good financial base. This paper can'l make economie excuses, at least none that are good enougli to explain such ads Why? Rod Hunt Arm Arbor Dear Rod, Wc agree with you completely on the objectionable nature of the ad in question. f we liad been able to inspeel the ad before press time, we would have rejeeted il on principie, bui we didn 't. Newport is being informed of out objections. Sorry. DearSUN: I was a winner in your "Win A Pound of Columbian" contest, 3rd place. 1 won 1 year sub. to the SUN and a T-shirt. 1 enjoy reading your paper and ['m sure ii would make my time go a little easier. I was busted in Traverse City for selling tour grams of hash oil to a state pig. I got 1 to 4. lt's getting kind of sad when tliey start putting people away for BS. like that. I would like it very much if you would put my name and number in the paper. Keep up the good work. Michael Hardy. No. 141185 Ionia. Midi DearSUN: As a new reader, l'd like to say that the SUN is a truly fine alternative newspaper. However, that is not the real reason 1 decided to write. In the Sept. 3 issue you commented on Detroit's "Radio Wasteland" where prograniming responsibility is zero. Well, that irresponsibility has spread into one other area (besides the govemment)! On the 27th,Steve Glant Promotions offered Flo and Eddie and the Turtles and did not delivei . Now, $5.50 is not the issue here. lt's the principie of the whole deal where the public is hörnswoggled by an trresponsible promoter. Up until 2 days before the show, the commercials on the radio claimed thai The Turtles would play when wlien in fact tliey didn't. This in itself is not too it's the fact that Stcve Glantz never announced that Flo and Eddie would not appear. The management must have known prior to that show and did not have the class to tel] the public prior to the show. If that is not shoddy PR, 1 really can't fathom what else it coud be. There is no excuse for this ripoff of the public trust, not at all. Many Flo and Eddie fans were irate and were very vocal about their sentiments (I count myself among the very vocal fans!). In demandingan explanation after tlie show, I was given no satisfaction whatsoever, and l'iïi very certain others were as equally disappointed as well! In the past Steve Glantz has proven himself to be a thief of the public trust (remember the oversellrng at the l'alace when he firsi startod up!). It seems tliat he is up to his o ld tricks again, and the tricks are as refined as ever! His publicbe-damned promoting is something to be shunned by all concerned people in the región. Glantz deserves to be drawn and quartered in Kennedy Square downtown and hung by his toenails from the mivenmast of the first slow boat to Antaractica for his rotten promoting!