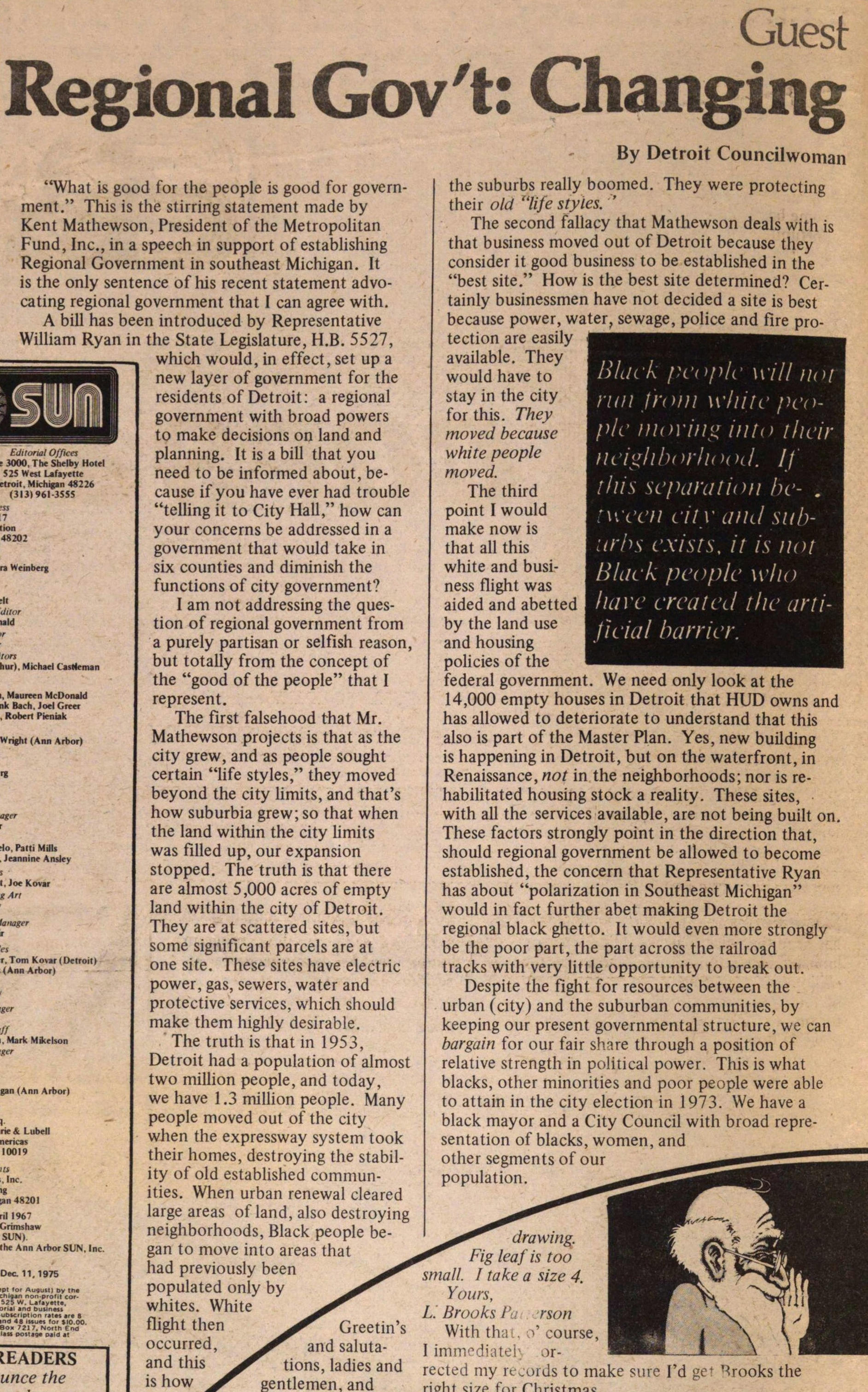 "What is good for the people is good for government." This is the stirring statement made by Kent Mathewson, President of the Metropolitan Fund, Inc., in a speech in support of establishing Regional Government in southeast Michigan. It is the only sentence of his recent statement advocating regional government that I can agree with. A bilí has been introduced by Representative William Ryan in the State Leeislature, H.B. 5527, which would, in effect, set up a new layer of government for the residents of Detroit: a regional government with broad powers to make decisions on land and planning. It is a bilí that you need to be informed about, because if you have ever had trouble "telling it to City Hall," how can your concerns be addressed in a government that would take in six counties and diminish the functions of city government? I am not addressing the question of regional government from a purely partisan or selfish reason, but totally from the concept of the "good of the people" that I represent. The first falsehood that Mr. Mathewson projects is that as the city grew, and as people sought certain "life styles," they moved beyond the city limits, and that's how suburbia grew; so that when the land within the city limits was filled up, our expansión stopped. The truth is that there are almost 5,000 acres of empty land within the city of Detroit. They are at scattered sites, but some significant pareéis are at one site. These sites have electric power, gas, sewers, water and protective services, which should make them highly desirable. The truth is that in 1953, Detroit had a population of almost two million people, and today, we have 1.3 million people. Many people moved out of the city when the expressway system took their homes, destroying the stability of old established communities. When urban renewal cleared large areas of land, also destroying neighborhoods, Black people gan to move into areas that had previously been populated only by whites. White flight then occurred, and this is how the suburbs really boomed. They were protecüng their oíd "Ufe styïes. ' The second fallacy that Mathewson deals with is that business moved out of Detroit because they consider it good business to be established in the "best site." How is the best site determined? Certainly businessmen have not decided a site is best because power, water, sewage, pólice and fire tection are easily available. They would have to stay in the city for this. They moved because white people moved. The third point I would make now is that all this white and business flight was aided and abetted by the land use and housing policies of the federal government. We need only look at the 14,000 empty houses in Detroit that HUD owns and has allowed to deteriórate to understand that this also is part of the Master Plan. Yes, new building is happening in Detroit, but on the waterfront, in Renaissance, not in the neighborhoods; nor is rehabilitated housing stock a reality. These sites, with all the services available, are not being built on. These factors strongly point in the direction that, should regional government be allowed to become established, the concern that Representative Ryan has about "polarization in Southeast Michigan" would in fact further abet making Detroit the regional black ghetto. It would even more strongly be the poor part, the part across the railroad tracks with very little opportunity to break out. Despite the fight for resources between the urban (city) and the suburban communities, by keeping our present governmental structure, we can bargain for our fair share through a position of relative strength in political power. This is what blacks, other minorities and poor people were able to attain in the city election in 1973. We have a black mayor and a City Council with broad representation of blacks, women, and other segments of our J population. _f 0& ïxmwHi mus HMMH MH00M