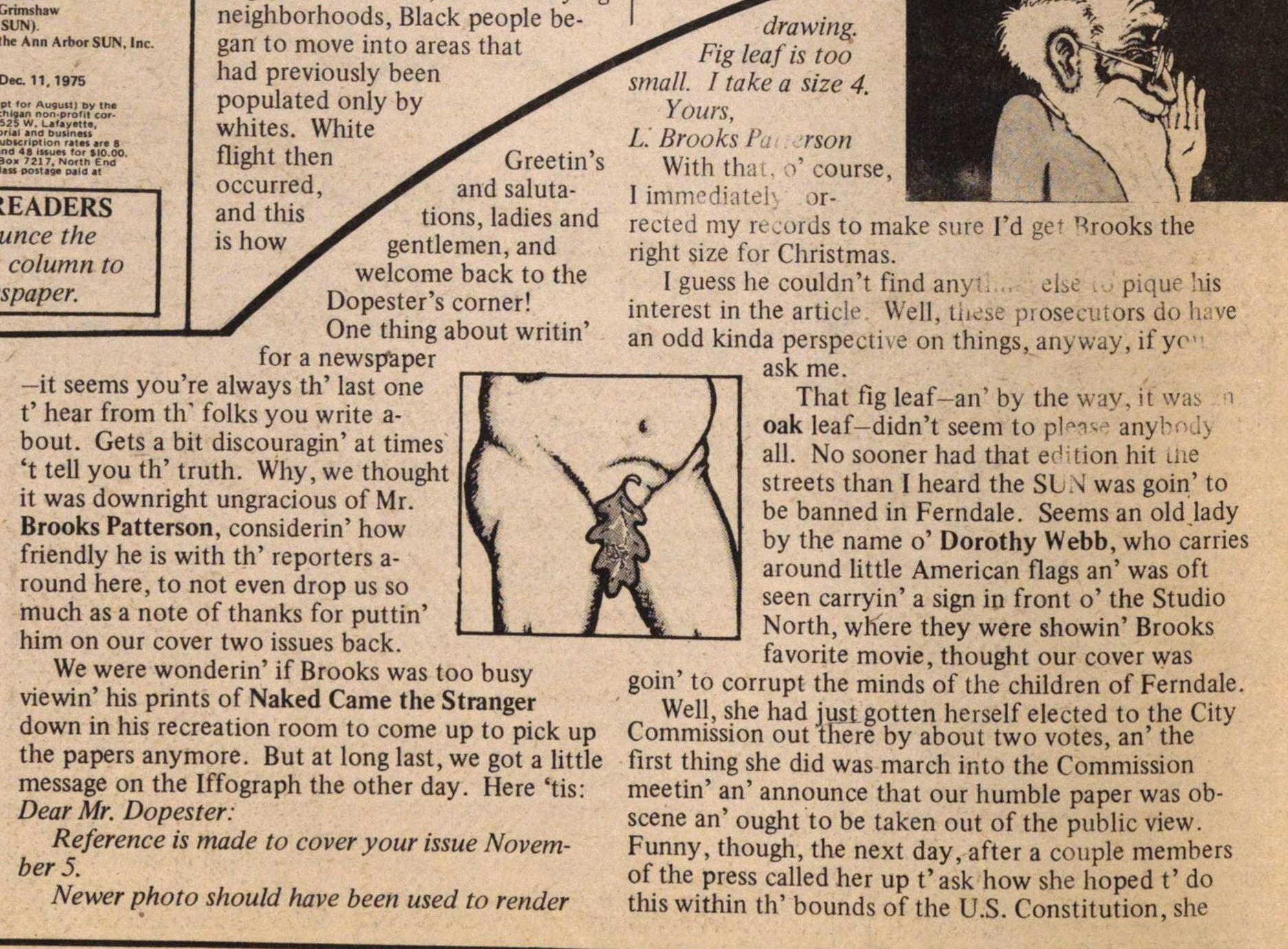 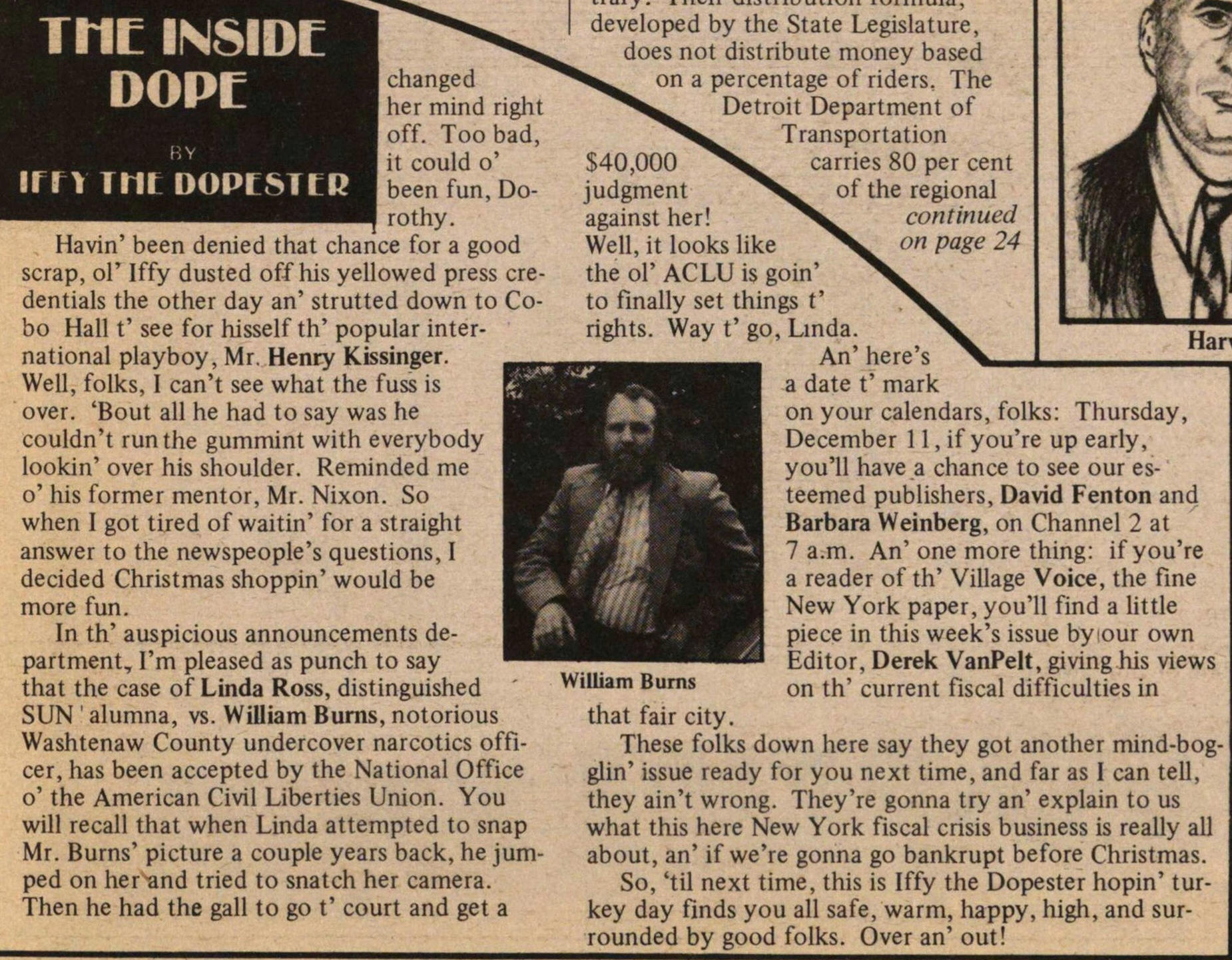 r Greetin's and T tions, ladies and r gentlemen, and welcome bark tr the Dopester's corner! One thing about writin' ior a newspaper -it seems you're always th' last one t' hear from th' folks you write about. Gets a bit discouragin' at times 't teil you th' truth. Why, we thought it was downright ungracious of Mr. Brooks Patterson, considerin' how friendly he is with th' reporters around here, to not even drop us so much as a note of thanks for puttin' him on our cover two issues back. We were wonderin' if Brooks was too busy viewin' his prints of Naked Came the Stranger down in his recreation room to come up to piek up the papers anymore. But at long last, we got a little message on the Iffograph the other day. Here 'tis: DearMr. Dopester: Reference is made to cover your issue November 5. Newer photo should have been used to render drawing. Figleafistoo smal!. I take a size 4. Yours, L. Brooks Pa rson With that, o' course, I iirlmediatel' rected my records to make sure I'd get %ooks the right size for Christmas. I guess he couldn't find any?. .. eLc piqui 'ais interest in the article Wel!, these piosecutors do li. ve an odd kinda perspectne on things, anyway, if y asK me. That fig leaf-an' by the way, it was i oak leaf- didn't seem to pl-n-1 anybod all. No sooner had that e' tion hit die streets than I heard the SLN was goin' to be banned in Ferndale. Seems an old.lady by the name o' Dorothy Webb, who carries around little American flags an' was oft seen carryin' a sign in front o' the Studio North, where they were showin' Brooks favorite movie, thoueht our cover was goin' to corrupt the minds of the children of Ferndale. Well, she had just gotten herself elected to the City Commission out there by about two votes, an' the fust thing she did was march into the Commission meetin' an' announce that our humble paper was obscene an' ought to be taken out of the public view. Funny, though, the next day, after a couple members of the press called her up t'ask how she hoped t' do this within th' bounds of the U.S. Constitution, she changed her mind right off. Too bad, it could o' been fun, Dorothy. Havin' been denied that chance for a good scrap, ol' Iffy dusted off his yellowed press credentials the other day an' strutted down to Cobo Hall t' see for hisself th' popular national playboy, Mr. Henry Kissinger. Well, folks, I can't see what the fuss is over. 'Bout all he had to say was he couldn't run the gummint with everybody lookin' over his shoulder. Reminded me o' his former mentor, Mr. Nixon. So when I got tired of waitin' for a straight answer to the newspeople's questions, I decided Christmas shoppin' would be more fun. In th auspicious announcements department, l'm pleased as punch to say that the case of Linda Ross, distinguished SUN ' alumna, vs. William Burns, notorious Washtenaw County undercover narcotics officer, has been accepted by the National Office o' the American Civil Liberties Union. You will recall that when Linda attempted to snap Mr. Burns' picture a couple years back, he jumped on her and tried to snatch her camera. Then he had the gall to go t' court and get a $40,000 V judgment S against her! Well, it looks like the ol' ACLU is goin' V to finally set things t' V rights. Way t' go, Linda. An here's ■ a date t' mark on your calendars, folks: Thursday, December 1 1 , if you're up early, you'll have a chance to see our esteemed publishers, David Fenton and Barbara Weinberg, on Channel 2 at 7 a.m. An' one more thing: if you're a reader of th' Village Voice, the fine New York paper, you'll find a little piece in this week's issue byiour own Editor, Derek VanPelt, giving his views on th' current fiscal difficulties in that fair city. These folks down here say they got another mind-bogglin' issue ready for you next time, and far as I can teil, they ain't wrong. They're gonna try an' explain to us what this here New York fiscal crisis business is really all about, an' if we're gonna go bankrupt before Christmas. So, 'til next time, this is Iffy the Dopester hopin' turkey day finds you all safe, warm, happy, high, and surrounded by good folks. Over an' out!