The City Be That Bad? 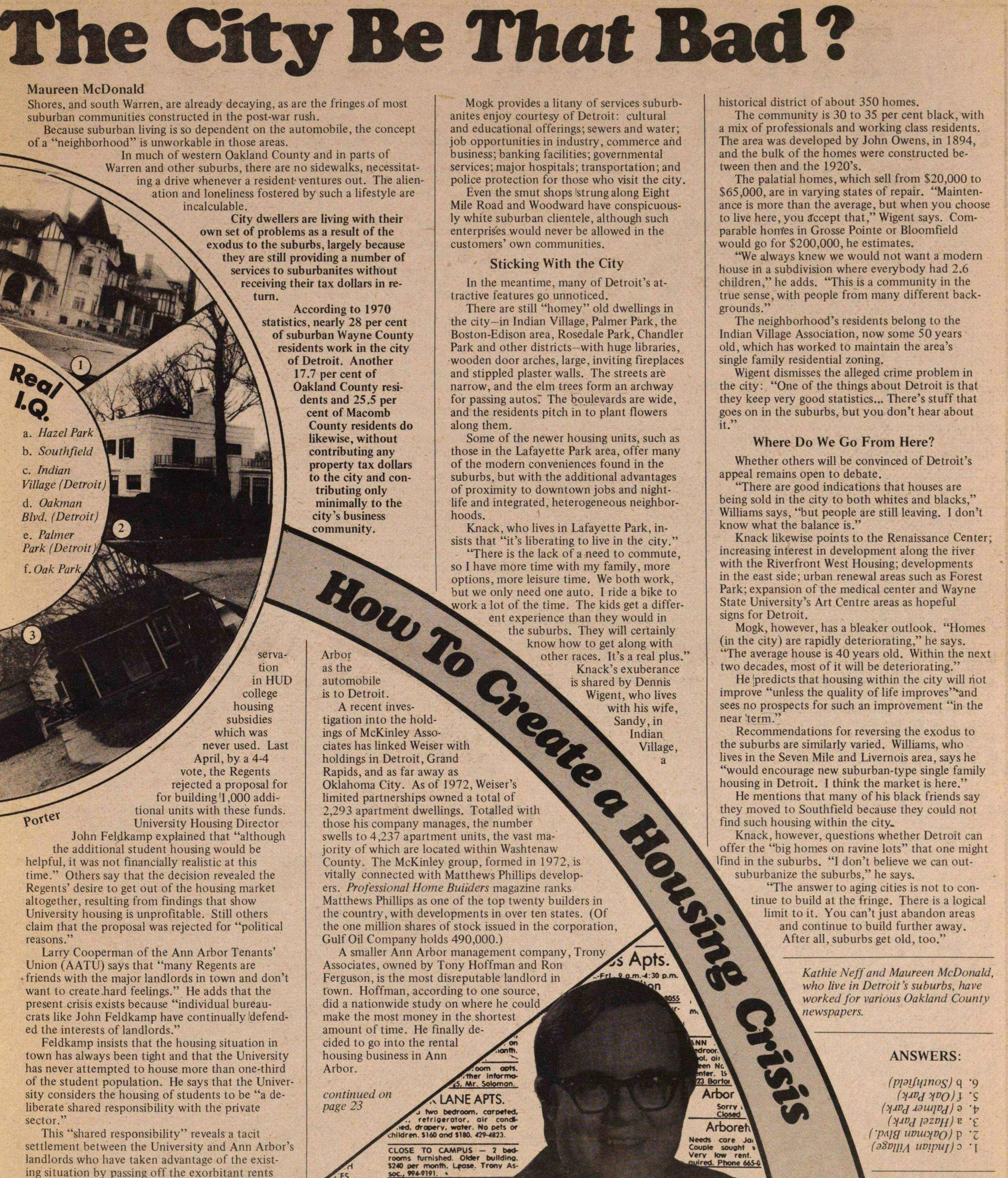 Shores, and south Warren, are already decaying, as are the fringes of most suburban communities constructed in the post-war rush.

Because suburban living is so dependent on the automobile, the concept of a "neighborhood" is unworkable in those areas.

In much of western Oakland County and in parts of Warren and other suburbs, there are no sidewalks, necessitating a drive whenever a resident ventures out. The alienation and loneliness fostered by such a lifestyle are incalculable.

City dwellers are living with their own set of problems as a result of the exodus to the suburbs, largely because they are still providing a number of services to suburbanites without receiving their tax dollars in return.

Even the smut shops strung along Eight Mile Road and Woodward have conspicuously white suburban clientele, although such enterprises would never be allowed in the customers' own communities.

Sticking With the City

In the meantime, many of Detroit's attractive features go unnoticed.

There are still "homey" old dwellings in the city - in Indian Village, Palmer Park, the Boston-Edison area, Rosedale Park, Chandler Park and other districts - with huge libraries, wooden door arches, large, inviting fireplaces and stippled plaster walls. The streets are narrow, and the elm trees form an archway for passing autos. The boulevards are wide, and the residents pitch in to plant flowers along them.

Some of the newer housing units, such as those in the Lafayette Park area, offer many of the modern conveniences found in the suburbs, but with the additional advantages of proximity to downtown jobs and nightlife and integrated, heterogeneous neighborhoods.

Knack, who lives in Lafayette Park, insists that "it's liberating to live in the city."

"There is the lack of a need to commute, so I have more time with my family, more options, more leisure time. We both work, but we only need one auto. I ride a bike to work a lot of the time. The kids get a different experience than they would in the suburbs. They will certainly know how to get along with other races. It s a real plus."

Knack's exuberance is shared by Dennis Wigent, who lives with his wife, Sandy, in Indian Village, a historical district of about 350 homes.

The community is 30 to 35 percent black, with a mix of professionals and working class residents. The area was developed by John Owens, in 1894, and the bulk of the homes were constructed between then and the 1920s.

The palatial homes, which sell from $20,000 to $65,000, are in varying states of repair. "Maintenance is more than the average, but when you choose to live here, you accept that," Wigent says. Comparable homes in Grosse Pointe or Bloomfield would go for $200,000, he estimates.

"We always knew we would not want a modern house in a subdivision where everybody had 2.6 children," he adds. "This is a community in the true sense, with people from many different backgrounds."

The neighborhood's residents belong to the Indian Village Association, now some 50 years old, which has worked to maintain the area's single family residential zoning.

Wigent dismisses the alleged crime problem in the city: "One of the things about Detroit is that they keep very good statistics... There's stuff that goes on in the suburbs, but you don't hear about it."

Where Do We Go From Here?

Whether others will be convinced of Detroit's appeal remains open to debate.

"There are good indications that houses are being sold in the city to both whites and blacks," Williams says, "but people are still leaving. I don't know what the balance is."

Knack likewise points to the Renaissance Center; increasing interest in development along the river with the Riverfront West Housing; developments in the east side; urban renewal areas such as Forest Park; expansion of the medical center and Wayne State University's Art Centre areas as hopeful signs for Detroit.

Mogk, however, has a bleaker outlook. "Homes (in the city) are rapidly deteriorating," he says. "The average house is 40 years old. Within the next two decades, most of it will be deteriorating."

He predicts that housing within the city will not improve "unless the quality of life improves" and sees no prospects for such an improvement "in the near term."

Recommendations for reversing the exodus to the suburbs are similarly varied. Williams, who lives in the Seven Mile and Livernois area, says he "would encourage new suburban-type single family housing in Detroit. I think the market is here."

He mentions that many of his black friends say they moved to Southfield because they could not find such housing within the city.

Knack, however, questions whether Detroit can offer the "big homes on ravine lots" that one might find in the suburbs. "I don't believe we can out-suburbanize the suburbs," he says.