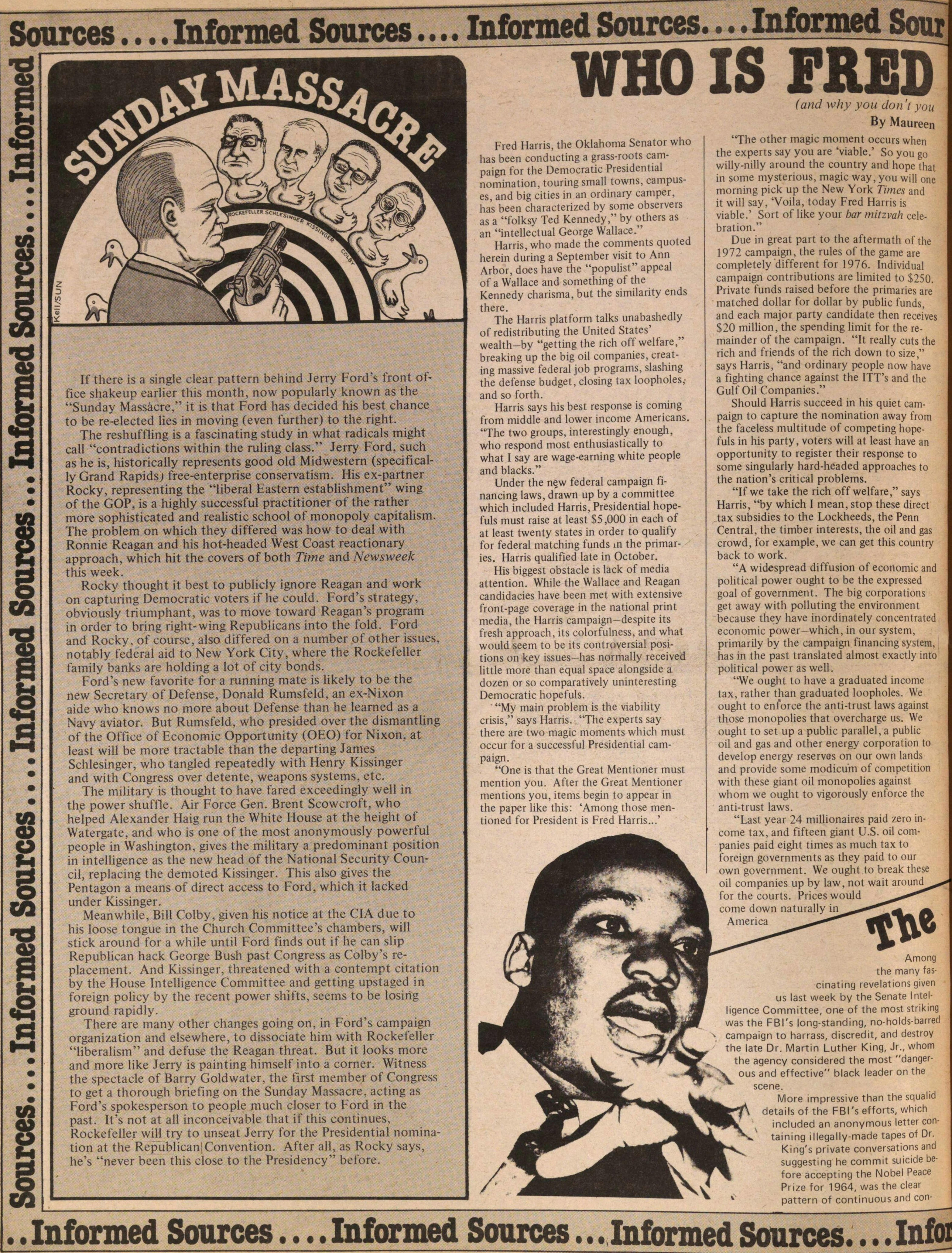 If there is a single dear pattern beliind Jerry Ford's front office shakeup earlier this month, now popularly known as the "Sunday Massácre," it is that Ford has decided his best chance to be re-elected lies in moving (even further) to the right. The reshuffling is a fascinating study in what radicáis might cali "contradictions within the ruling class." Jerry Ford, such as he is, lüstorically represents good old Midwestern (specifïcally Grand Rapidsj free-enterprise conserva tism. His ex-partner Rocky, representing the "liberal Eastern establishment" wing of the GOP, is a highly successful practitioner of the rather more sophisticated and realistic school of monopoly capitalism. The problem on which they differed was how to deal with Ronnie Reagan and his hot-headed West Coast reactionary approach, which hit the covers of both Time and Newsweek this week. Rocky thought it best to publicly ignore Reagan and work on capturing Democratie voters if he could. Ford's strategy, obviously triumphant, was to move toward Reagan's program in order to bring wing Republicans into the fold. Ford and Rocky, of course, also differed on a number of other issues, notably federal aid to New York City, where the Rockefeller family banks are holding a lot of city bonds. Ford's new favorite for a running mate is likely to be the new Secretary of Defense, Donald Rumsfeld, an ex-Nixon aide who knows no more about Defense than he learned as a Navy aviator. But Rumsfeld, who presided over the dismantling of the Office of Economie Opportunity (OEO) for Nixon, at least will be more tractable than the departing James Schlesinger, who tangled repeatedly with Henry Kissinger and with Congress over detente, weapons systems, etc. The military is thought to have fared exceedingly well in the power shuffle. Air Force Gen. Brent Scowcroft, who helped Alexander Haig run the White House at the height of Watergate, and who is one of the most anonymously powerful people in Washington, gives the military a predominant position in intelligence as the new head of the National Security Council, replacing the demoted Kissinger. This also gives the Pentagon a means of direct access to Ford, which it lacked under Kissinger. Meanwhile, Bill Colby, given his notice at the CIA due to his loose tongue in the Church Committee's chambers, will stick around for a while until Ford finds out if he can slip Republican hack George Bush past Congress as Colby's replacement. And Kissinger, threatened with a contempt citation by the House Intelligence Committee and getting upstaged in foreign policy by the recent power shlfts, seems to be losirig ground rapidly. There are many other changes going on, in Ford's campaign organization and elsewhere, to dissociate him with Rockefeller "liberalism" and defuse the Reagan threat. But it looks more and more like Jerry is painting himself into a corner. Witness the spectacle of Barry Goldwater, the first member of Congress to get a thorough briefing on the Sunday Massacre, acting as Ford's spokesperson to people much closer to Ford in the past. It's not at all inconceivable that if this continúes, Rockefeller will try to unseat Jerry for the Presidential nomination at the Republicanj Convention. After all, as Rocky says, he's "never been this close to the Presidency" before. __ _ _- __- - __- - - - - - - - - - - - - -- Sfliirces Informed Somt Infarmed Sonrces. . ♦ . Informed Som . . Informed Sources .... Informeel Sources . . . Informed Sources. . . . Injoi