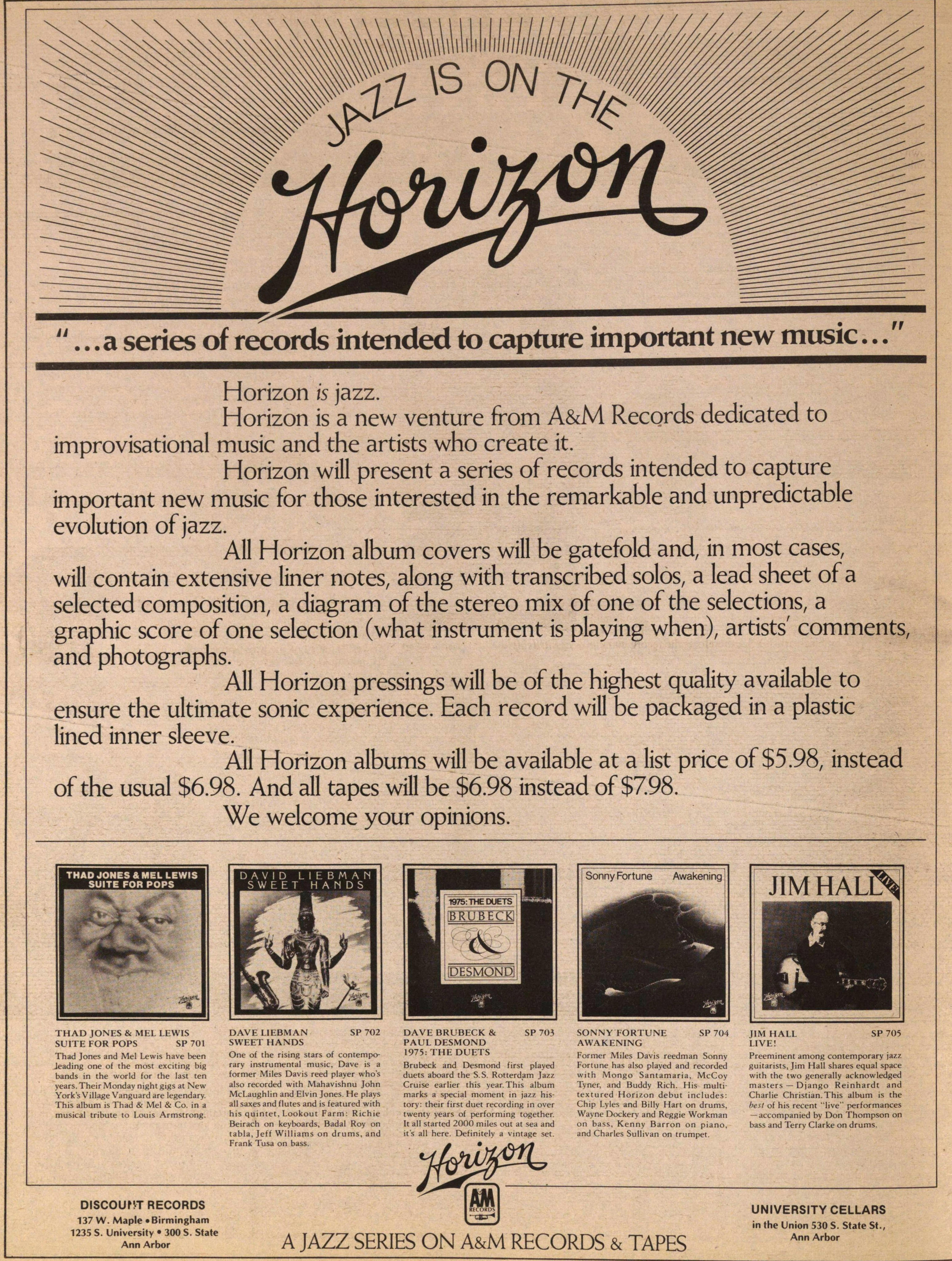 ■ .. -- - - - - "...a series of records intended to capture important new music ..." Horizon is jazz. Horizon is a new venture from A&M Records dedicated to improvisational music and the artists who créate it. Horizon will present a series of records intended to capture important new music for those interested in the remarkable and unpredictable evolution of jazz. All Horizon album covers will be gatefold and, in most cases, will contain extensive liner notes, along with transcribed solos, a lead sheet of a selected composition, a diagram of the stereo mix of one of the selections, a graphic score of one selection (what instrument is playing when), artists' comments, and photographs. All Horizon pressings will be of the highest quality available to ensure the ultimate sonic experience. Each record will be packaged in a plastic lined inner sleeve. All Horizon albums will be available at a list price of $5.98, instead of the usual $6.98. And all tapes will be $6.98 instead of $7.98. We welcome your opinions. ffyrrTTTnJ Wi'f .VJ IJ JJ jJ SonnyFortune Awakening TT 4U A T T&s. rfck i-: -. " ,, ■" " iS j I 1975: THE DUETSJ i& ÊÊÊÊ É _ V Hjt, ftJR H Bk I I ID 1 U D L V. InI I L WF THAD JONES & MELLEWIS DAVE LIEBMAN SP 702 DAVE BRUBECK & SP 703 SONNYFORTUNE SP 704 JIM HALL SP 705 SUITE FOR POPS SP 701 SWEET HANDS PAUL DESMOND AWAKENING LIVE! Thad Jones and Mei Lewis have been One of the rising stars of contempo1975: 1 HE DUETS Former Miles Davis reedman Sonny Preeminent among contemporary jazz Jeading one of the most exciting big rary instrumental music, Dave is a Brubeck and Desmond first played Fortune has also played and recorded guitarists, Jim Hall shares equal space bands in the world for the last ten former Miles Davis reed player who's duets aboard the SS. Rotterdam Jazz with Mongo Santamaría, McCoy with the two generally acknowledged years.TheirMonday nightgigs at New also recorded with Mahavishnu John Cruise earlier this year.This album Tyner, and Buddy Rich. His multimasters - Django Reinhardt and York'sVillageVanguardarelegendary. McLaughlin and Elvin Jones. He plays marks a special moment in jazz histextured Horizon debut includes: Charlie Christian.This album is the This album is Thad & Mei & Co. in a all saxes and flutes and is featured with tory: their first duet recording in over Chip Lyles and Billy Hart on drums, best of his recent "live" performances musical tribute to Louis Armstrong. his quintet. Lookout Farm: Richie twenty years of performing together. Wayne Dockery and Reggie Workman - accompanied by Don Thompson on Beirach on keyboards. Badal Roy on It all starled 2000 miles out at sea and on bass, Kenny Barron on piano. bass and Terry Clarke on drums. tabla, Jeff Williams on drums, and it's all here. Definitely a vintage set. and Charles Sullivan on trumpet. Frank Tusa on bass. m tt I -0 DISCOUNT RECORDS j UNIVERSITY CELLARS 137W.Maple.Birmmgham J n the Union 530 S. State St., 1235 s "ZTZLT s sute A JAZZ SERIES ON A&M RECORDS & TAPES AnnArbor